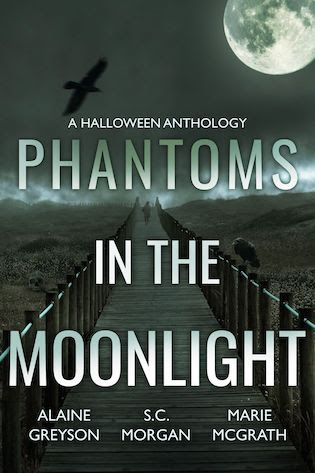 
11 stories to fright and delight. As the air turns cooler and bonfires take over the night, gather around the fire for stories of fall fun, strange occurrences and abject terror.
These stories published by authors S. C. Morgan, Marie McGrath and Alaine Greyson are sure to get your heart pumping and take your imagination on a wild ride.

Goodreads / Amazon
—
EXCERPT:
Lucifer. The Devil? The night had taken a turn for the worse. Trudy glanced at the pill bottle. Forget the rest of today. This haunting of a witch, sorceress, and now the Devil was enough to end things. No one would ever believe her if she explained.
“Whenever I see opportunity, I’m there. This is no different. Besides, I’m convinced this will be an easy sell.” Lucifer nodded toward Miranda. “Sending in the young ones to do an adult’s job? No worries. Just makes my sell easier.”
Miranda balled her fists and pursed her lips. She stepped toward Lucifer, but Gretchen pushed her onto the couch.
“It would help if you turned the lights back on, Luce. If you want a conversation, it helps if she can see you.”
Without thinking, Trudy latched onto Miranda’s arm. The darkness was good enough. She didn’t want to know what the Devil looked like and confirm her childhood nightmares. Trudy squeezed her eyes shut as a loud clap reverberated around the room.
Miranda elbowed Trudy in the ribs. “Open your eyes.”
Trudy covered her face with her hands. “This is a dream. That means a beastlike red creature is standing in my living room. I’m good.”
Miranda giggled. “Beastlike? Do you believe everything you read? Stop believing the stereotypes and open your eyes.”
Trudy removed her hands from her face and blinked. Standing next to Gretchen was the handsomest man she had ever seen. His black hair fell to one side; his smile illuminated his green eyes and his dimples. The Devil had dimples. Trudy couldn’t wrap her head around his appearance. Wasn’t the Devil supposed to be ugly, carry a pitchfork, and have a tail?
Lucifer snapped his fingers. “It’s rude to stare.” He strolled toward Trudy and positioned himself on the cushion next to her. “Had a bad day, hun?”
Trudy stifled a laugh. This was too much. “You could say that.”
Miranda leaned across Trudy and met Lucifer’s gaze. “We already discussed her job and her mother.”
“And …?”
Gretchen sighed. “We got nowhere. Something else is causing her pain.”
Lucifer stroked his chin. “Losing your job and almost losing your mom wasn’t enough to push you over the edge.” A gleam appeared in Lucifer’s eyes. “It’s a boy. It’s always a boy. You’re dating that lawyer, Carter, right?”
Trudy scowled. “None of your business.”
“Ah, my dear, but it is my business. Everything is my business. What happened? Did he break up with you?”
“I’m not discussing it, so, if the three of you would leave …”
Miranda stroked the back of her hand. “It’s okay. Let it out. We’re here to help.”
Gretchen smirked. “We’re here to help. I’m not too sure about Luce.”
“I enjoy a good breakup story. Let’s hear it. Trudy? We’re waiting.”
Trudy shifted her gaze from Gretchen to Lucifer. Was this a nightly thing, going around town to counsel people about their bad days? She didn’t figure the Devil for the listening type. “Carter’s a jerk who doesn’t deserve my headspace.”
“Yet you’d kill yourself over him?” Lucifer asked. “Interesting.”
Trudy stood and glared at Lucifer. “You don’t understand. No one understands. I lost everything today. My job, my mom, Carter.”
“Technically your mom is—”
“Unless you can change things, shut up.”
Lucifer bowled over in laughter. “Oh, honey, I can change things. But can you pay the price?”

Author Bio:
S. C. Morgan lives outside of Toronto, Ontario with his wife, three kids and a dog, and spends the daylight working for a big bank’s Marketing Dept and the night time putting pen to paper. His short story Watch Your Step appeared in the Unleashed: Monsters Vs Zombies Anthology and The Old Thomson House was featured in Writing.com’s horror newsletter. For more information about S. C. Morgan’s stories and reviews, you can follow him on Twitter at @SCMorganAuthor and #SCMorganReviews.

Twitter / Facebook
--
Marie McGrath lives in a small rural town in Maryland. She hopes to inspire others with her stories. Her favorite genres to read are YA Romance and Contemporary Fiction. She loves the color turquoise, tigers, and listening to music.
Website / Twitter / Facebook
--
Alaine Greyson lives outside of Baltimore, Maryland with her husband, son and cocker spaniel puppy. She loves to push the envelope with her stories and strives to make her readers sympathize with characters from all backgrounds. Alaine is an avid reader and considers Jane Austen and Diana Gabaldon to be her literary heroes. She loves Mexican food, 80s music and is a Robert Downey Jr. super-fan. You will find mentions of things she loves throughout her books.
Website / Twitter / Facebook