My name is Ruby Shaw. At least it is today.

It was something else two weeks ago, but I’m not allowed to use my real name anymore. That’s what Victor Wilson, the US marshal who’d dumped us off in this godforsaken little town, told me. And my daughter? Yes, she had to choose a new name too. She picked Allison—Allie for short—which isn’t too different from her birth name.

It’s been hard getting settled into Paradise, Arizona, especially after our neighbor was found dead the morning after we moved in. We’re carrying on with our new normal, but it’s been especially hard for 12-year-old Allie, whose mood is as dark as the black clothing she always wears. After dropping her off at school, I walked over to a café called Bette’s Place, where Bette, as usual, poured me a cup of coffee while peppering me with questions about real estate maven Greta Stramtussle’s murder.

I have no idea what happened to Mrs. Stramtussle and am doing everything I can to keep as far away from the murder investigation as possible. Victor keeps telling me to fly under the radar, but so far, I haven’t been able to do that since someone is trying to frame me for murder. Ever since we arrived, the folks around town have been giving us the side-eye. They’re convinced I had something to do with Mrs. Stramtussle’s demise. Just because I’m new in town doesn’t mean I have something to hide, though I most certainly do have a lot to hide, namely my entire identity. How did we end up in witness protection? All because of brother-in-law’s entanglement with some bad dudes—some really, really bad dudes—who I’ll have to testify against in the future.

Leaving the cafe, I caught a glimpse of Luke, who was slinging eggs and hash browns in the kitchen. He gave me a friendly smile and a wave as I left. He is, without a doubt, the hottest guy in town, but I have to admit there aren’t many men to choose from. When Luke came to my house with vegetable scraps for my compost pile the other day, he definitely was flirting with me, but getting involved with anyone while in witness protection is out of the question.

While our lives are definitely chaotic right now, one thing is certain: I need a job. Victor told me he wasn’t going to support us financially forever, so finding employment is at the top of my list. I was an artist in New York City before ending up in this postage-stamp-size town, so I hadn’t had a regular nine-to-five job in, well, forever. I already lost one position in town when I convinced the local feed store owner I was not interested in his physical advances. I’m pretty sure he’s still smarting from my kick that made him curl up like a jumbo shrimp.

The good news is I have a job interview today. I’m going to hike up to the Hilltop Hotel, which I’ve heard is haunted. Paradise is a former ghost town, so who am I to say if the hotel is full of ghosts or not? I hope the only spirits I encounter are friendly and that I last longer than I did at Farrell’s Feed and Tack.

Allie and I are committed to staying in Paradise, just as long as it doesn’t turn out to be more dangerous than where we’ve been. I hope I’m making the right decision because our lives depend on it. 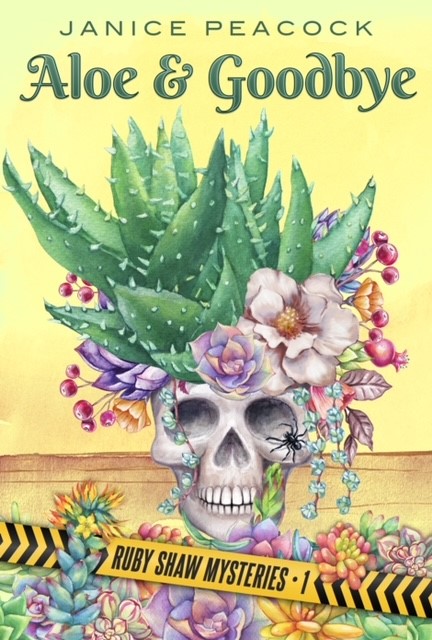 New Yorker Ruby Shaw arrives in a hillside town in Arizona with a brand-new name, a duffel bag on her shoulder, and her daughter, Allie, at her side. Before arriving, Ruby witnesses a murder that lands her in the witness protection program. That decision means she’s gone from being a successful artist to being a nobody in a postage-stamp-sized town called Paradise—a name that doesn’t fit the former ghost town. Even though their new digs are a little shabby, and there may be ghosts haunting the town, they are optimistic about their new lives, that is, until a neighbor turns up dead.

Having just arrived in town, living next door to the victim, and without an alibi, the community members are suspicious of Ruby. A local deputy befriends her, but the deputy still points to her as the culprit each time they find a new clue. If matters weren’t bad enough, Allie is having trouble fitting in at her new school, and Ruby can’t seem to hold down a job.

As they settle in, they meet the quirky inhabitants of Paradise: Bette—the chatterbox café owner, Flora—Allie’s eccentric babysitter, and Derek—who runs local history tours, which he jazzes up with ghost stories of questionable veracity.

Ruby’s life improves when she meets a handsome cook at the local café who is passionate about succulents and cacti, and may feel equally passionate about her. Even though Ruby and Allie want to stay in Paradise, a US marshal has other ideas, as he threatens to move them to a new town after Ruby gets mixed up in the murder investigation. Ruby must find the killer before she and Allie lose their new home or even worse—their lives.

REVIEW
*I received a free copy of this book which I voluntarily chose to write an honest review for.
What a fun start to a new cozy series. As a nice change of pace we meet "Ruby" and her daughter "Allie." These are not their real names because they are in the witness protection program and this is their first time ever in Paradise, Arizona where they have hidden. Used to New York this is quite the change of pace for the pair but it is a necessity for them to adapt. This is just made harder when on their very first night Ruby hears screaming next door while witnessing a strange event after. Not thinking too much of it she falls asleep on the couch only to learn the next day that her neighbor is now dead. The Marshall they use for contact insists they stay of it but events make that less than likely. I must admit that this is definitely a challenge for anyone but Ruby sure does give it her best efforts. This all combines into a unique cozy that will have your turning page after page as it all plays out surprising you at every turn. I highly recommend it to cozy fans looking for something different. I really liked it so I give it 4/5 stars. 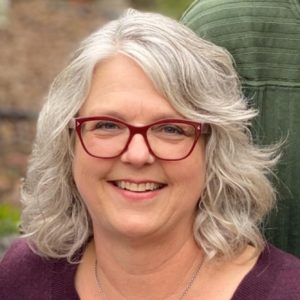 Janice Peacock is a cozy mystery author who specializes in craft and hobby mysteries. She loves to write about artists who find new ways to live their lives and perhaps catch a criminal or two in the process. While working in a glass studio with several colorful and quirky artists, she was inspired to write the Glass Bead Mystery Series. The Ruby Shaw Mysteries, which are set in a small hillside mining town, were inspired by her trips to Jerome, Arizona, and Jacksonville, Oregon. When Janice isn’t writing about amateur detectives, she wields a 2,500-degree torch to melt glass and create one-of-kind beads and jewelry. She lives in the San Francisco Bay Area with her husband and an undisclosed number of cats. Visit Janice online at janicepeacock.com.