Author Interview with Marc Jedel, author of Fish Out of Water: An Ozarks Lake Mystery (Book #1)

If I’m just listening for pleasure, I like rock. When I’m writing, I need to have only instrumental music in the background. It drowns out the noise of my brain scurrying around looking for good sentences.Whenever I listen to music with lyrics while writing, I find that I end up writing down the lyrics and fitting them into the story. Sometimes I think this works out pretty well, and when my editor agrees, they stay in the book. A few of my books have this but I was more disciplined in listening to instrumental music while writing Fish Out of Water so I avoided that particular variety of silliness.

Q. Is there any music that makes your ears bleed?

I hate loud, thumping repetitive music that just repeats and repeats and … you get the picture. I’d tell you what kind that is, but I never stop on those stations long enough to figure it out. Just enough to know it’s not for me.

Q. Is there something that makes you hold your nose?

I recently discovered that I hate the smell of boiling bones. Don’t ask me how I know this. Let’s just say the life of a mystery author has more strange aspects than you might think.

Q. Are there any things you always put in your books?
Humor, quirky side characters, mostly realistic decisions made by characters, and a mystery that can be solved without having the police give the amateur sleuth a critical clue. That just feels like cheating to me.

Q. Are there any things you never put in your books?
I write clean cozy mysteries where violence or sex takes place off the page, if at all — mostly because writing violent scenes when it’s dark outside would probably frighten me and writing sex scenes would frighten my family and friends.

Q. What’s the hardest thing about being a writer?

Compared to people who actually have hard jobs or difficult lives, it seems strange to complain that being an author is hard. For me, the writing part isn’t difficult; it’s figuring out the plot. Knowing who killed whom and why before I start writing is essential. Once I thought I could whip a novel together without doing this and I found myself changing the killer and victim several times during the story. Definitely not a reader-pleasing move!

Since then I figure out the outline first. I like to have all the main parts of the novel pretty much settled before I start writing.

Q. What’s the easiest thing about being a writer?

Besides working in an imaginary world where I can knock off anyone who displeases me in an instant? When I first started writing a novel, I was surprised to find that I was far better at dialogue than I had expected. My friends and family kept telling me that they weren’t surprised that I could write about talking since I do that so much.

When I have a good outline, I find I can focus on crisp writing and coming up with funny situations/anecdotes to throw in. This also means less editing and I can hang on to what little sanity remains.

Q. Are there any things you never want to run out of?

I used to answer this question by saying Cheese. But now because of the pandemic, I think I’ll change my response to toilet paper.

Q. Are there any things you wish you’d never bought?

Percussion instruments for my kids. No wait, that was my sister who bought a drum set for my kids. So the thing I bought that I wish I hadn’t would be a record player for my son. Do you know how hard it is to ship albums and a record player across country to college? Why can’t he listen to Spotify like everyone else?

Q. What word would best describe you?

I’d hate to say ‘persistent’. I hate to give up when one more attempt might solve the problem. That’s usually a sign of a good engineer. Or detective! It’s not always a word that endears you to your spouse, however.

Q. What word might describe you but you wish it didn’t?

Some have called me ‘obsessive’ at times because I don’t like to give up. Yet, one of my favorite bosses once told me that often a person’s biggest strengths could often be described as their greatest weakness. So, I’ll stick with ‘persistent,’ it’s more positive.

About fISh OUt of WaTER

fISh OUt of WaTER - An Ozarks Lake Mystery

A small-town homicide. A community swamped in secrets. Can married amateur sleuths bait and capture the killer before the truth slips away?

Elizabeth Trout had escaped her rural Arkansas hometown. Compelled to sort through her deceased grandmother’s belongings, she and her new husband Jonas make an unexpected trip to the family ranch. But when the property manager turns up dead, Elizabeth is rocked when her ex-boyfriend-turned-deputy arrests her for the murder.

With incriminating evidence and the sheriff convinced he’s got the right suspect, Elizabeth and Jonas must fish for clues on their own. But with a multitude of potential culprits and her husband’s contrasting personality, Elizabeth fears she may be left dangling on the hook for a crime she didn’t commit.

Can these newlyweds net the real killer before Elizabeth is jailed for murder?

Fish Out of Water is the charming first book in the Ozarks Lake Mystery series. If you like quirky characters, clever twists and turns, and puzzling whodunits, then you’ll love Marc Jedel’s humorous tale.

Buy Fish Out of Water to reel in a slippery catch today!

REVIEW
*I received a free copy of this book which I voluntarily chose to write an honest review for.
What a great start to a new cozy series full of Southern flair. We meet Elizabeth as she returns to her hometown with her new husband to deal with the death of her grandmother. Things are fine until the property manager turns up dead. The sheriff just happens to be her ex and he believes she is guilty making her the main suspect. With no other options her and hubby start investigating taking us along for the ride. Full of hidden clues and quirky characters the town comes to life as the story evolves. Makes for quite the fun read the fans of cozies are sure to enjoy as it keeps you guessing. I look forward to more books in the series. I really liked it so I give it 4/5 stars. 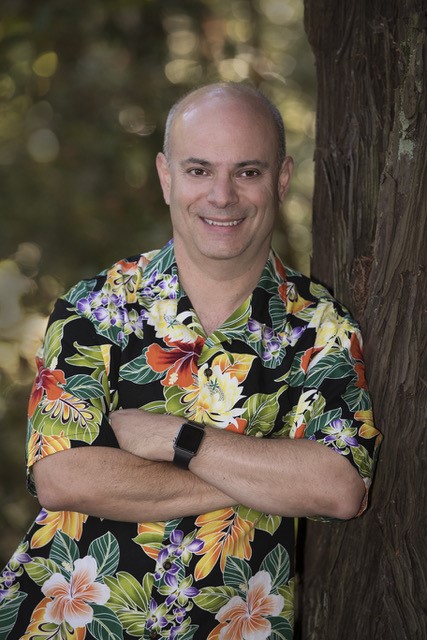 For most of my life, I’ve been inventing stories. Living in many places around the United States, including a lot of time in the South, has given me a particularly keen appreciation for those who feel like a “fish out of water” sometimes.

My writing skills were honed in years of marketing leadership positions in Silicon Valley. While my high tech marketing roles involved crafting plenty of fiction, we called these marketing collateral, emails and ads.

The publication of my first novel, Uncle and Ants in the Silicon Valley Mystery series, gave me permission to claim “author” as my job. And achieving Amazon Best Seller status gave me even better adjectives to use in front of “author." This has led to way more interesting discussions than answering “marketing.”

Telling the stories in the Ozarks Lake Mystery series has given me an enjoyable opportunity to spend time with characters that somewhat resemble people I’ve known. Writing alternating chapters from the perspective of each spouse of the newlywed Trout couple allowed me to experience multiple personalities without getting a visit from mental health professionals.