November Bean here, year of the N. I've never been one to brag, but I can yodel in four octaves. You might ask why one would do that, but the real question is, why not?

I've lived most of my life in the Piney Falls area. I don't like talking about the early years. Cult life was too restrictive and we were all supposed to be the same. If you've ever met me, you know I like to stand out in a crowd.

After the Fallen Branch Cult disbanded, I married the Toilet Paper King. When people ask about our marriage, I like to say, "I've never been more satisfied than when he was flushed."

Luckily, he was loaded, so guess what? Now I don't have to worry about money. I teach meditation and yoga and like to howl. Oh, and I'm the best-dressed person on the Oregon Coast. Make sure you put that in bold.

She was sitting in the corner of Cosmic Cakes and Antiquery with her little computer. I asked if she minded if I sat next to her and she said, "I'm kind of busy. I have a deadline." When people say they're busy, usually they mean they don't want to be bothered by salesmen or internet trolls. I'm neither, so I bought her another Orion's Orange Scone and scooched in real close beside her. I could tell she was the hugging type.

I told her all about the edible plants in the forest I use to make essential oils and spaghetti sauce and she didn't say a word. Sometimes people take that "being polite" business way too far, you know?

We did eventually have a nice conversation. I asked if she'd consider writing a book about me, and she said, "you're stepping on my foot." When she got up to go to the bathroom, I got her phone out and put my number in. This is the beginning of something special.

I'm not normally the dishing type. Just kidding! Of course I will! While she was in the bathroom, I looked at her search history and saw some troubling things: What type of poison kills the fastest, do body parts decompose in a compost pile and how long does it take to dig a grave.

I found her latest Google search term, which was, "How to kill using a fork." That's when I took her plate and fork back to Doris and asked her cut that crazy writer off for the day. Sheesh!

Let's see. What else?

Oh, she does this weird thing where she puts her pointer fingers on her face when she's thinking real hard. The fifth time I asked she said it helps her when she's stuck. When I get stuck, I use my Meditation for the Confuddled Mind. That, or I howl.

It's a mystery to me. As you can tell by this interview, I'm about the most normal person you'll encounter. You know how they like to embellish though. I bet she's made me out to be a real kook.

Lanie is my best friend in the whole wide world. Even though she's the fancy type and comes from a big city, she treats me like I'm just as accomplished. We share all of our deepest thoughts and she doesn't judge me for the mistakes I've made. Just last night while she was taking a bubble bath, I sat outside her door and told her jokes. She laughed at every single one. At least I think it was laughter? I'd better check today to make sure she's still aliv

If I tell you now, you'll never read the book! My second-least-favorite character is Cosmo Hill, owner of Cosmic Cakes and Antiquery. Not because he's a bad dude or anything, but because he pretends he's smarter than me. He's got secrets and I know every single one, so he doesn't dare confront me, but I can tell by the way he looks at me. Let's call it a sneer. There will never be a Bean Scone, I know that for sure.

Golly whiz. I have so many irons in the fire. Once we get this murder situation under control, I'd like to expand my meditation studio. I've been thinking about a complete remodel. One of my lifelong dreams has been to crown myself queen, so perhaps I'll add a meditation for royalty.

The other thing I'd like to do is dig up this back yard. When I mow, it's like a slalom ski run. It's funny, but you'd almost think there were bodies buried there. Lanie is always telling me I have the best imagination.

Oh, and currently I'm making a documentary about ants. They're the P.h.d. holders of the insect world.

About Welcome to Piney Falls

Lanie has no idea what awaits her in Piney Falls...

Lanie Anders has a perfectly-ordered life. From her half-foam morning latte to her high-powered executive job - she controls every outcome. But when her house burns to the ground in mysterious circumstances, her life is thrown into confusion.

Searching for some kind of purpose, she stumbles across a century-old mystery and flees to Piney Falls, Oregon, an oceanside hamlet with a curious past. But something isn’t quite right in the picturesque town. Her neighbor speaks in riddles, the death rate is alarmingly high and the impossibly handsome town baker is hiding something.

With each clue she unearths in the present and the past, she becomes more convinced that the townspeople are in imminent danger.

Will Lanie be able to solve both mysteries without putting her own life in jeopardy?

Find out why readers are calling Welcome to Piney Falls “immensely immersive and totally gripping.” Don't miss the first in this exciting new mystery series!

REVIEW
*I received a free copy of this book which I voluntarily chose to write an honest review for.
This is a solid start to a new fun cozy mystery series. We meet Lanie who's life has pretty much been turned upside down. In an effort to get things back on track she decides to write an article about the hidden history of a small town that wants to change its' name to Piney Falls. She packs up, rents a house, and heads on her way to get started. Unfortunately when she gets there her contact, the mayor, had been found dead at the bottom of the falls which happens more then it really should in this area. Determined to write her story regardless she starts her research only to tumble down a path that the residents do not want uncovered. This makes for a fascinating read as we meet the quirky characters of the town while they also try to stop her from finding the truth. Makes for quite the fun read as it all plays out keeping the reader guessing until the very end. I look forward to more in this series. I really liked it so I give it 4/5 stars. 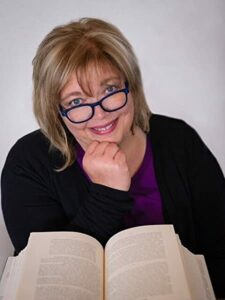 Joann Keder spent most of her years in the Midwest, growing up and raising a family on the Great Plains of Nebraska. She worked for sixteen years as a piano teacher before returning to school to receive a master's degree in creative writing. A mid-life move to the Pacific Northwest lead her to re-examine her priorities. She now creates stories about life and relationships in small towns while her ever-patient husband encourages her on.