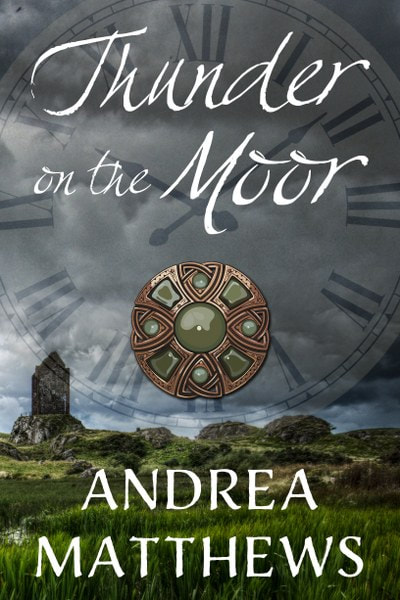 Thunder On the Moor

Thunder On The Moor Book 1

Maggie Armstrong grew up enchanted by her father’s tales of blood feuds and border raids. In fact, she could have easily fallen for the man portrayed in one particular image in his portrait collection. Yet when her father reveals he was himself an infamous Border reiver, she finds it a bit far-fetched—to say the least—especially when he announces his plans to return to his sixteenth century Scottish home with her in tow.
Suspecting it’s just his way of getting her to accompany him on yet another archaeological dig, Maggie agrees to the expedition, only to find herself transported four hundred and fifty years into the past. Though a bit disoriented at first, she discovers her father’s world to be every bit as exciting as his stories, particularly when she’s introduced to Ian Rutherford, the charming son of a neighboring laird. However, when her uncle announces her betrothal to Ian, Maggie’s twentieth-century sensibilities are outraged. She hardly even knows the man. But a refusal of his affections could ignite a blood feud.
Maggie’s worlds are colliding. Though she’s found the family she always wanted, the sixteenth century is a dangerous place. Betrayal, treachery, and a tragic murder have her questioning whether she should remain or try to make her way back to her own time.
To make matters worse, tensions escalate when she stumbles across Bonnie Will Foster, the dashing young man in her father’s portrait collection, only to learn he is a dreaded Englishman. But could he be the hero she’s always dreamed him to be? Or will his need for revenge against Ian shatter more than her heart? 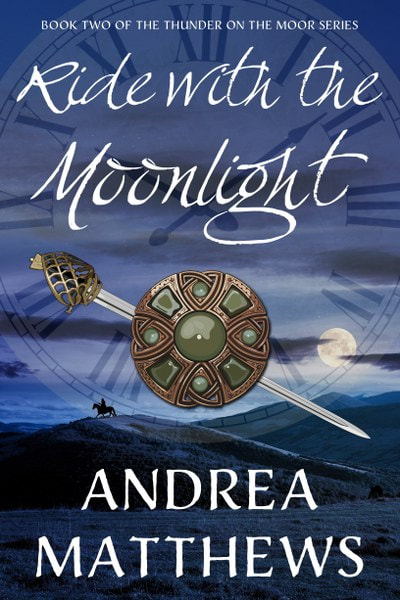 Ride With the Moonlight

Thunder On the Moor Book 2

After rescuing sixteenth-century Border reiver Will Foster from certain death at her family’s hands, time traveler Maggie Armstrong finally admits her love for the handsome Englishman, though she can’t rid herself of the sinking suspicion that her Scottish kin are not about to let them live in peace. What she doesn’t expect is the danger that lurks on Will’s own side of the Border.

When news of their plans to marry reaches the warden, he charges Will with March treason for trysting with a Scot. Will and Maggie attempt to escape by fleeing to the hills, but when Will is declared an outlaw and allowed to be killed on sight, they can no longer evade the authorities. Will is sentenced to hang, while Maggie is to be sent back to her family. Heartbroken, she has no choice but to return to Scotland, where her uncle continues to make plans for her to wed Ian Rutherford, the wicked Scotsman who she now realizes murdered her father in cold blood.

With Will facing the gallows in England, and herself practically under house arrest in Scotland, she continues to resist her uncle’s plans, but her efforts are thwarted at every turn.Will’s family, however, is not about to stand by and watch their youngest lad executed simply because he’s lost his heart to a Scottish lass.

A daring plan is set into motion, but will it be in time to save Will’s life and reunite the lovers? Or will Ian’s lies prompt Maggie’s family to ensure the bond between them is forever destroyed? 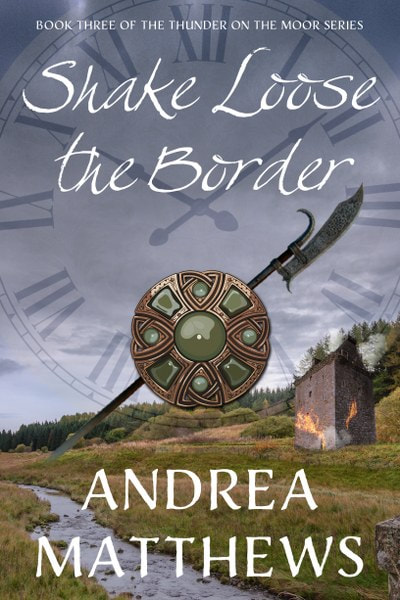 Thunder On the Moor Book 3

With Will and Maggie’s wedding just a week away, the last thing they need to stumble upon is Johnnie Hetherington’s dead body tied to a tree, especially one that’s so close to their cottage. Recognizing it as a sure sign that Johnnie has betrayed the family once too often, Sergeant Richie Carnaby gathers Will and his family together for questioning, though it seems obvious only a fool would kill a man on his own land. Then who did murder the rogue, and why?

Feeling confident it wasn’t any of the Fosters, Richie allows Will and Maggie’s wedding to proceed, but the couple has barely exchanged vows when the Armstrongs attack in force. Geordie is determined to rescue his niece from the clutches of Will Foster, whether she wants to go or not. And if he happens to make her a widow in the process, so be it. Will senses the danger and implores Dylan to get Maggie away to safety, no matter where — or when — that may be.

Though Maggie protests, Will assures her he will follow as soon as he is able. Yet how can that be possible when Dylan whisks her back to the twentieth century? Sharing her fears about Will, and unable to forget his own love, Annie, Dylan attempts to return to the past one last time despite his growing concerns over the disintegrating amulet stone. But will he make it in time to rescue Will, or will the villainous Ian Rutherford, who has already killed in cold blood once, win the ultimate battle and see Will and Maggie separated forever? 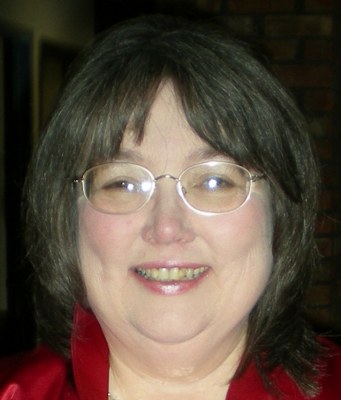 Andrea Matthews is the pseudonym for Inez Foster, a historian and librarian who loves to read and write and search around for her roots, genealogical speaking. She has a BA in History and an MLS in Library Science and enjoys the research almost as much as she does writing the story. In fact, many of her ideas come to her while doing casual research or digging into her family history. She is the author of the Thunder on the Moor series set on the 16th century Anglo-Scottish Border, and the Cross of Ciaran series, where a fifteen-hundred-year old Celt finds himself in the twentieth century. Andrea is a member of the Romance Writers of America, the Long Island Romance Writers, and the Historical Novel Society.

You can keep track of Andrea's upcoming releases and tidbits about her books on the following sites: