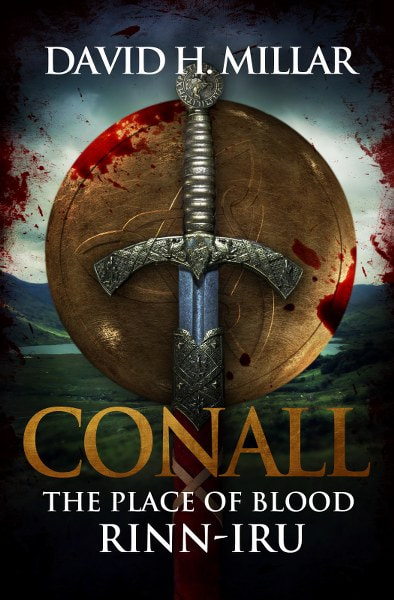 The Place of Blood – Rinn-Iru

Over four hundred years before the birth of Christ, the island of Ériu is a patchwork of feuding kingdoms, wide plains, and impassable bogs. Battle, intrigue, betrayals, and courage are part of life for the Celts who call Ériu home, while from their underground halls the mysterious aes sidhe seduce brave warriors, turning men in to kings and binding them with fearsome geis.

Conall Mac Gabhann is content with his apprenticeship to the local blacksmith. Content, that is, until his family is slaughtered in their home.

Two men share responsibility for the massacre: a mad Irish king and a dissolute Roman. Conall will have his vengeance on both, or die in the attempt.

Accompanied by his childhood friend Brion ó Cathasaigh and the veteran warrior Fearghal ó Maoilriain, Conall's hunt takes him northward through unfriendly kingdoms and treacherous bogs to a confrontation beyond the ancient earthworks of the Black Pig's Dyke.

Along the way, Conall will gather an army, and come to the attention of the aes sidhe. An apprentice blacksmith could become a king with their help—if he so desires. 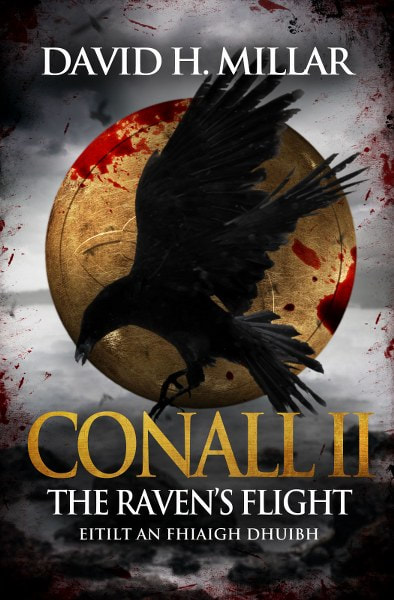 Conall II: The Raven’s Flight continues to chronicle the epic journey of the warriors from Ériu (Ireland).

Conall Mac Gabhann and his brooding queen, Mórrígan, lead over two thousand warriors together with their followers across the narrow sea that separates Ériu from Albu (Britain). Their quest: the capture of Cassius Fabius Scaeva, the dissolute Roman patrician held responsible for the slaughter of their families.

The Ériu encounter human, natural, and supernatural foes and friends. At the mercy of the aes sidhe, a race of demi-goddesses who demand that he fulfill an ancient geis, Conall is named as the “Hand of the Goddess” and given the instrument that will crush the Na Daoine Tùrsach—a tribe of fanatical, blood-lusting priests.

They battle fierce northern tribes: the Aos na Coille, whose one-eyed king, Drostan Ruadh, opposes their presence as do the Na Mèadaidh led by the sly Finnean Mac Sèitheach. Not all are enemies. The Aos an Fhithich offer their support, although it too comes at a price.

Heroes and villains from myth, legend, and history converge in this saga set in the vast ancient forests, treacherous bogs, snow-capped mountains, and mysterious lochs of Scotland some four hundred years before the birth of Christ. 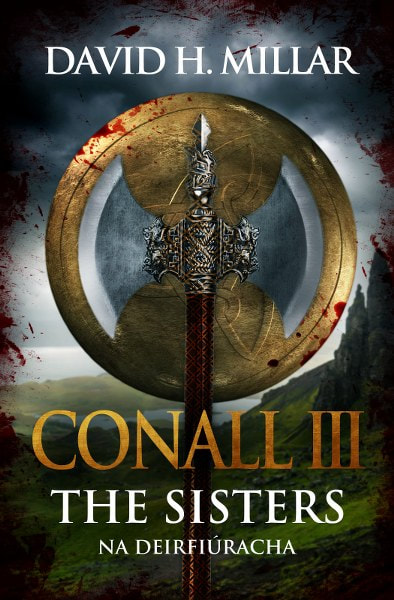 It is 406 B.C. The Gaels tramp through the vast forests of lowland Scotland, cross the brooding moors and marshes of the Pennines, and plough the grain fields of the South. The majestic stone brochs and dùns of the north give way to the great hillforts of the south.

Cloaked in a rich tapestry of tattoos or wearing armour inlaid with iron scales, the Gaels stand as one, taunting their enemies with fierce battle-cries and insults.

In Conall III: The Sisters—the third book of the Conall series—the women take centre stage. Brighid and Danu are kidnapped on the orders of Kartimandu, a malevolent queen bent on conquering the North. Mórrígan and Conall’s blood oath promises no quarter until the young twins are returned.

Will Eachdonn Breac, betrayed by his queen—Ceana, redeem his honour on the battlefield? A merciless assassin stalks the community. Tadhg Ó Cuileannáin is given the unenviable task of tracking the killer down. A mission made worse, when the signs point to the sister of one of Conall’s closest friends. Amid, the battles and intrigue, Mòrag Ni Artair, a tall beauty and fearsome warrior, sets her sights on Conall. A clash with Mórrígan—Conall’s queen, appears inevitable. 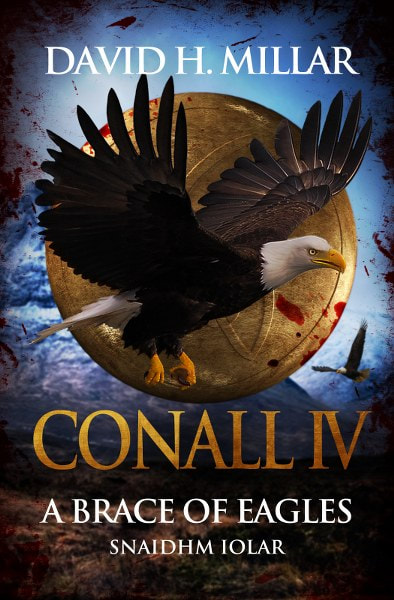 “Butter-gold and cruelly hooked, the beak ripped a ragged gash across the newborn’s throat.”

Son of a blacksmith, Conall Mac Gabhann’s only desire was to follow in his father’s footsteps and enjoy a long life with his childhood love, Mórrígan. The slaughter of their parents dashed those dreams. Fuelled by vengeance, both embark on the dark path of retribution.

Assassins, treason, and treachery thrive. Above all, Conall values loyalty. Thus, treason within the tribe sours his belly. Mercy will have no part in his response.

The fourth novel in the Conall series, Conall IV: A Brace of Eagles is a rousing epic of Celtic heroes and villains, bloody battles, political intrigue, honour, treachery, and forbidden love. 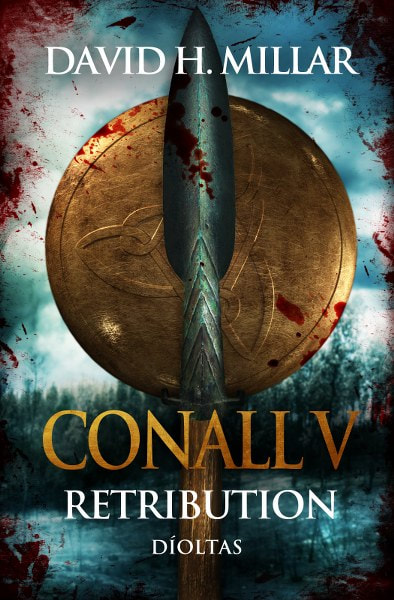 “Witch!” Tullus gasped.
“You are not that fortunate, Roman,” came the menacing reply.”

Blood has purchased a fragile peace for Conall and Mórrígan and the close circle of friends they call family. Now, allies and enemies alike wonder if the king and queen have lost the thirst for vengeance on those who slaughtered their families. Alarmed, gods, kings, and despots conspire to poke the slumbering fire.
Brennus of the Senones still smarts at his defeat at Conall’s hands and covets his lands and wealth. Will a bruised ego and hubris overrule the Gaulish king’s normal pragmatism?
The Gaiscedach want revenge for the defeat and execution of their queen. In the dead of night, like cockroaches, they scuttle over the walls of Lugudunon.
Marcus Fabius Ambustus tolerates no challenge to his plan to be Dictator of Rome. But has arrogance blinded him to the enemy he has nurtured?
The gates of Rome and retribution draw closer. But Conall needs his enemies as much as his friends. Still, who are enemies and who are friends? It is a time of schisms and rebuilding, of loved ones endangered, and assassins and spies revealed.
Yet, there has always been one constant. Only the foolish doubt Conall and Mórrígan will show any mercy to those who threaten their family.

Conall V: Retribution is the fifth and final book in the Conall series. 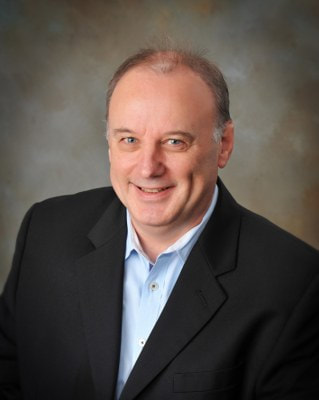 Millar moved from Ireland to Nova Scotia, Canada, in the late 1990s. After ten years shovelling snow, he decided to relocate to warmer climates and has now settled in Houston, Texas. Quite a contrast!

An avid reader, armchair sportsman, and Liverpool Football Club fan, Millar lives with his family and Bailey, a Manx cat of questionable disposition known to his friends as ‘the small angry one!’ 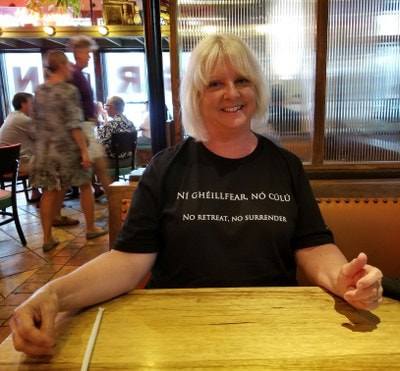 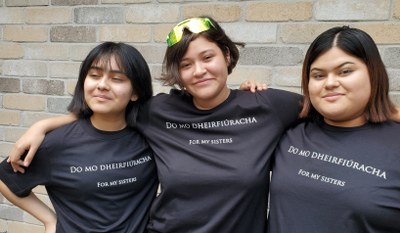 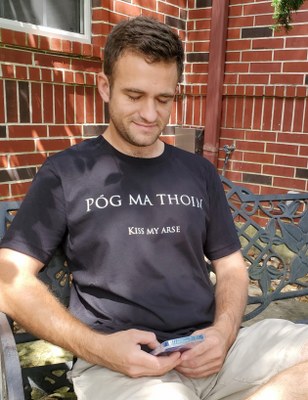 Conall t-shirt of choice – 3 winners, US only!