Cover Reveal for The Sphere of Spirit by KD Peters

Title: The Sphere of Spirit
Release: 19 April 2022
Genre: Fantasy YA 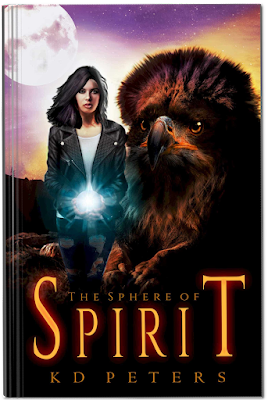 Blurb:
The Sphere is an ultimate weapon to destroy a world and requires the sacrifice of ten magical kids. Nine are missing and novice fae, Sophie, is the tenth.

Seventeen-year-old Sophie Emerson struggles to keep her clairvoyance a secret. Seeing the future belongs to the Dark Ones. But when Sophie’s visions display the nine missing kids from the village and place herself in the middle of it all, she has a choice to make. Reveal her secret and suffer the consequences or end up being the missing segment of a weapon that will bring forth the apocalypse.

“Hmph.” I sighed, thinking that yesterday, a year ago, my life was normal. The change had started with a dream of a flaming bird. The phoenix lured me closer with its angelic melody, and when I reached it, I burned. It felt so real that when I opened my eyes, the pain still lingered. I woke up in the hospital, discovering that the migraine caused this pain. The killer headache had visited regularly, and it was the reason I was lying in this bed. The last part of the change...

The door swung open and Colby, the nurse, ferried herself into my room. Her curvy hips moved side to side with each step and her furious red hair was a few flickers away from glowing. Her sleek, black tail swayed behind her butt. She’d become a dear friend the past four days. Colby grabbed the chart in front of my bed and attached the result of my latest MRI for Dr. Bryanston.

I kept staring at her tail as Mom asked the dreaded question. “You know what is taking so long?”

“I’m sure it’s prepping the OR, Mrs. Emerson,” Colby said. “Nothing to worry about. Dr. Bryanston will be here shortly.”

Colby’s eyes flickered to me, flashed her grin—only for her favorite patients—and winked before she turned and flounced out of the room.

“Relax, look for a cheesecake recipe, something that your family can enjoy.”

Colby wasn’t the only one with a tail. There were others, too. Some had cat ears, others owned a mean pair of ram horns. One guy even had an eagle beak, but they were scarce. These human-creatures walked among the ordinary folk of Tacoma, Washington and now Atlanta. Not a single word escaped my lips about what I could see, especially to Francis and Daniel Emerson, my adoptive parents.

Faint bells chimed. I closed my eyes for a brief second before opening them. Oh, yeah, I forgot about the orbs of silver bright light that appeared with the tails and ears. The faint ringing of the bells followed whenever these specks of lights soared above me. Their brightness enhanced the headaches, so I made it my mission to ignore them. The tiny speck flew past Dr. Bryanston, trailing into the room. “You ready, Sophie?”

KD Peters loves the fantasy genre and is a young adult at heart. She dabbles in crossover genres with fantasy as one of her favorites. Mythical creatures like phoenixes and shape-shifting griffins are, among others, she created herself in The Sphere of Spirit. She’ll release her debut novel in the Legacy born series in 2022. If you want to know more about KD Peters, visit her website at kdpeters.com where you can follow her on her social media accounts.