1)     Tell us a little bit about yourself--both something we learn from [the story] and something that readers might not guess?  Oh gosh, I don’t see what all the fuss is about. I’m just the cook at the Seaside Cove Bed & Breakfast. Of course, I will be marrying the owner, Rick Atwood soon. And I have actually done a little sleuthing with Rick’s eleven-year-old daughter Alex. She wants me to help her again in this book, but I’m putting my foot down. It’s just too dangerous this time. As for what readers might not guess, I have no idea because my author has made my life an open book (not that it was my choice. I was perfectly happy before he came along!)
2)     How did you first meet your writer? We met when he did a casting call for a strong female lead to play opposite Rick and his daughter Alex. I didn’t apply, but my best friend Traci threw my name in the hat. Rick and I actually hit it off because he can be quite charming—when he’s not being grumpy, that is.
3)     Want to dish about him/her? I don’t usually talk about other people, but since he put me in the spotlight, I’m going to give him some of his own medicine in return. My writer loves to make people’s lives more difficult. He keeps complicating them with all sorts of problems. I wish he’d knock it off and just let us live in peace.
4)     Why do you think that your life has ended up being in a book? As with most things around the B&B, there’s a one-word answer—Alex. She and I hit it off almost immediately, and she decided she wanted me to become her mother. She played matchmaker for almost a year before she got me and Rick together. If she hadn’t done that, it’s quite possible the whole place would have gone up for sale. The other thing is that Alex is very precocious and loves to solve mysteries—especially when they involve murder
5.) Who's your favorite character? Why? I’m torn between Rick and Alex. I love Rick dearly, but if I had to choose, I would probably pick Alex. She and I seem to be kindred souls and I don’t think I could ever say goodbye to her.
6.)Who's your least favorite character? Why? Vincent Pallett. He’s a man with no social conscience and a thin skin.
7.) What's next for you? A honeymoon, then it will be back to work at the B&B. I’m sure our writer is cooking up something new (no pun intended). He’s talking about making our new staff at the B&B permanent. I suppose that could cause its own set of problems. And then there’s the baby brother Alex wants.She’s putting the pressure on our writer to make that happen. I just wish the two of them would give me a say in the matter!
Don’t miss out on your chance to win a $35 Amazon gift card in my Book Birthday Month contest for Lies, Spies, and the Baker’s Surprise. Enter the bonus code “#Marquetta” for three bonus entries in the May 29: Books a Plenty Book Reviews entry option.

About Lies, Spies, and the Baker’s Surprise 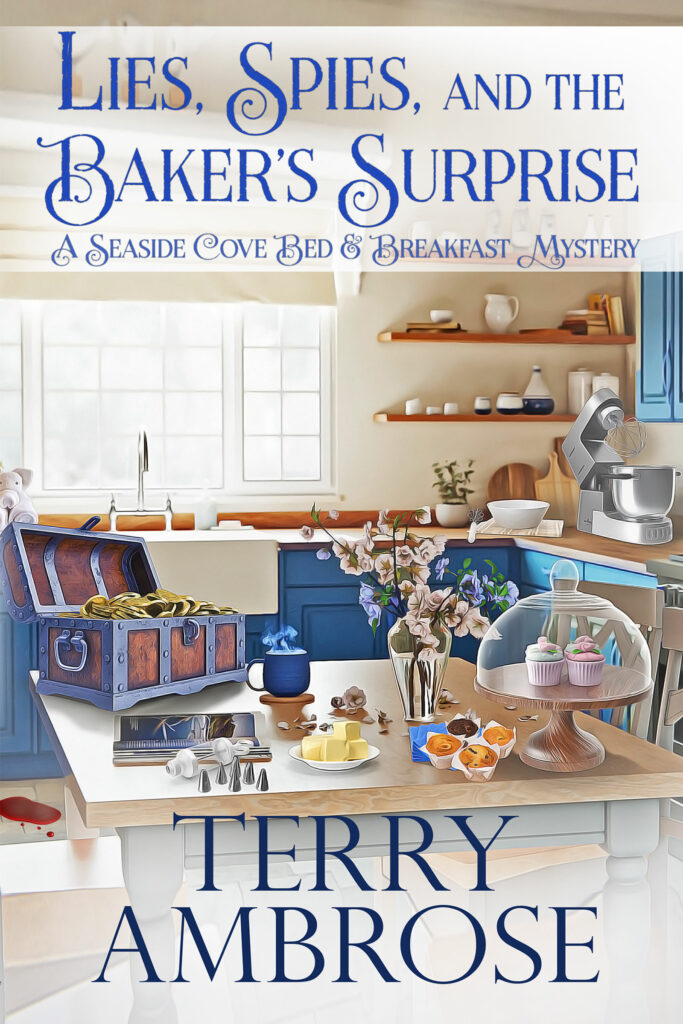 Rick Atwood is happy to welcome Henry and Tara Nicholas to his Seaside Cove Bed & Breakfast. Henry owns a bakery and Tara, a bookstore. They seem like a nice couple—until Rick’s daughter Alex overhears Henry talking on his cellphone to his real wife. The situation blows up the following morning when Tara discovers Henry has been lying to her—thanks in part to Alex’s interference. Tara disrupts the entire breakfast service. She then demands Rick evict Henry.

After finding Henry a room at the town’s motel, Rick hopes the drama is over. But when Henry is found dead the following morning, Rick feels partially responsible. He and Chief of Police Adam Cunningham launch an official murder investigation. They quickly find multiple witnesses who saw Tara in Henry’s room at the time of the murder.

Alex, convinced Tara is innocent, launches her own undercover investigation. Her discovery puts her in a deadly showdown with a sociopath on a bluff near the Seaside Cove Lighthouse. What happens on the bluff could make or break the official murder investigation.

REVIEW
*I received a free copy of this book which I voluntarily chose to write an honest review for.
This series just keeps getting better and better. Rick is finally getting ready to remarry which has Alex tickled to no end. This should be more then enough to keep her occupied but she just cannot contain herself after she hears a guest on the phone to what he claims is his wife though he checked in with a completely different spouse. Well of course Alex has to let the info be known to one and all which gets him kicked out to another place to stay. Rick feels guilty about this so when the man is found murdered he has to help solve the case. Alex has to get involved as well which leads her to quite the dangerous path when the mystery plays itself out. We get a perfect blend of POV's as we bounce between Alex and Rick giving us all of the details as they are found. The back and forth with keep the reader intrigued as they try to guess the next clue that will be found making for quite the fun read that is a perfect choice for cozy mystery fans. I really liked it so I give it 4/5 stars.

Once upon a time, in a life he’d rather forget, Terry Ambrose, tracked down deadbeats for a living. He also hired big guys with tow trucks to steal cars—but only when negotiations failed. Those years of chasing deadbeats taught him many valuable life lessons such as—always keep your car in the garage.

Terry has written eighteen books, several of which have been award finalists. In 2014, his thriller, “Con Game,” won the San Diego Book Awards for Best Action-Thriller. His series include the Trouble in Paradise McKenna Mysteries, the Seaside Cove Bed & Breakfast Mysteries, and the License to Lie thriller series.