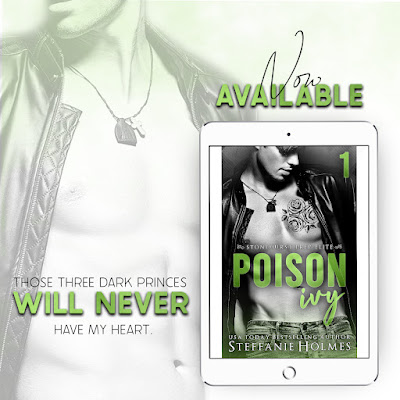 I'll do anything to get in. I'll even become theirs.
Victor. Torsten. Cassius – the jock, the artist, the stepbrother.
The Poison Ivy Club.
Ruthless.
Connected.
Violent.
Untouchable.
They rule Stonehurst Prep with an iron fist.
If you want Harvard, Princeton, or Yale, they'll get you in.
Guaranteed.
But they'll take their pound of flesh first.
A deal's a deal – you give them whatever they want, and they'll make your dreams come true.
And they want me.
In their beds.
On their arms.
Part of their gang.
I'll do anything to get into an Ivy League school.
I'll lie. I'll cheat.
I'll get on my knees.
I'll kill.
But those three dark princes will never have my heart.
This is a new adult, dark contemporary romance with three hot guys and one girl. It is intended for 18+ readers.
REVIEW
*I received a free copy of this book which I voluntarily chose to write an honest review for.
I must admit that I am totally in love with pretty much anything that Steffanie chooses to write about. That is why I was more then excited when I learned that we were getting a new series by her. We meet Fergie who has led an interesting life to say the least but that is now changing as she moves into her new step-daddy's house along with his youngest son who she thought was about 12 or so. Imagine her surprise when instead he is close to her age and smoking hot along with his friends who just happen to be the members of the Poison Ivy Club that rules her new school. She refuses to bow to any of them which leads to some very interesting interactions to say the least. I was totally hooked from page one finding myself sad when it came to an end. I am eagerly awaiting book two!!! A must read new series!!! I totally loved it so I give it 5/5 stars.
______