Blog Tour, Character Guest Post, Review, & Giveaway for A Shot in the 80% Dark by Amber Royer

Hey!  Look over here!  My name is Renoir, and I’m the bird Felicity gets to interact with in A Shot in the 80% Dark.  I’m a pretty important part of the plot, if I do say so myself.  I’m also clearly the most handsome character in the entire series.  I mean, look at my feathers!  They’re perfect! 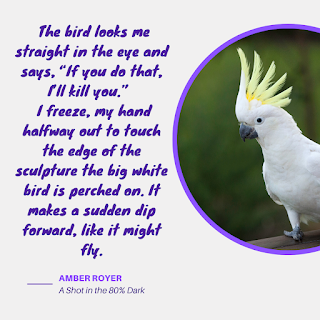 Anyway, I live in a museum.  It’s a glorious place, because people come in and talk to me every day.  And my best friend Tracie hangs out a lot.  She’s young for a human, barely an adult, but she really cares about people.  We’re both artists – I paint with my feathers and my feet – so we really appreciate each others’ work.  She also reads out loud to me, mainly news stories and celebrity gossip off her phone.  But it helps me be one well-informed bird!  Tracie is in love with all of the Hollywood Chrises – actors in a lot of her favorite movies.  She would never admit this to anyone, since where she goes to school, art and popular movies are not supposed to exist together.  This has left her conflicted.  Still, it would bring joy to her life if one of them returned her affections.  But they don’t even seem to know she exists.  It’s no wonder.  Tracie is such a timid human.  And she walks without confidence.  If only I could teach her to strut like any self-respecting member of the parrot family, then she’d be able to woo anyone she wanted.  And if I could teach her the intense stare of a bird – she’d be able to capture and read hearts.

I was in love once, when I was young.  It was a romance from afar, as my beloved was kept in a cage in the front window of the pet store, while I – after a “biting” incident that was a total misunderstanding – had been relegated to the back.  Colette had been taken home by a family with small children – which can be either very good or very bad for a bird -- and I’d feared for her wellbeing and chewed my feathers into a miserable state.  I’d still gotten adopted eventually, though, by a lady who didn’t believe my bad reputation.  She’d given me a chance and a home, since she was what humans refer to as an “empty nester” and we’d been happy together for years and years – right up until the nastiness with the hurricane.  I got left behind by mistake and spent days alone in the disaster area.  Afterwards – nothing was ever the same.  I wound up in a shelter, and then the museum.

I like my gig at the museum.  Families come to watch me paint, and I wonder if maybe one of them is the one that took my dear Colette.  And there’s too many people here for anyone to really track how many treats I’ve been given.  After everything that has happened to me, I really don’t want to mess up and lose another home.  Only – there was a murder.  And I overheard a lot of stuff leading up to it.  People often think birds are silly creatures and talk in front of us, but really, we’re paying attention. Some people are suspecting Tracie, and I don’t know what I’ll do if they take her away.

Felicity is a chocolate maker who’s already solved several murders.  She winds up taking care of me while the museum is closed, and I have been trying to tell her the parts I know about what really happened.  Only – I’m a bird.  I can’t speak as fluently as a human.  I’ve been saying what I can, using as many words as I can remember.  But she just seems confused.  I hope the two of us can find a way to communicate before a murderer goes free. 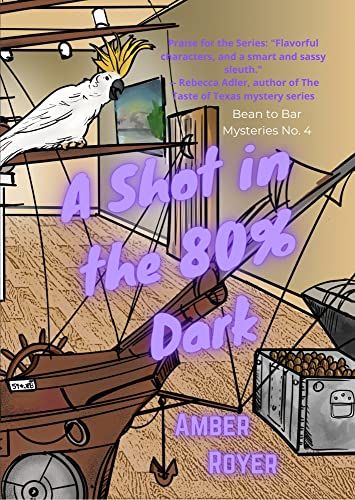 Felicity Koerber’s bean to bar chocolate shop thriving. Despite everything she’s been through with the murders she’s helped solve, Felicity is ready to take on new challenges. So when a local museum offers her a contract to create a chocolate replica of a gigantic sailing ship sculpture for a gala celebrating Galveston’s history, she jumps at the chance to combine chocolate-crafting with art.

The project is fun – right up until there’s not just one but two dead artists on the scene, and Felicity has to change gears back to detective. Logan, Felicity’s business partner and previous bodyguard, and Arlo, Felicity’s ex who is now the cop investigating the case, are split on which victim they think was actually the intended one. Felicity may have to take some chances, both emotionally and in luring out a killer, to determine the truth.

Can she find out how Galveston’s history relates to the murders, unmask a killer, and prepare 2,000 chocolate desserts for the gala all at the same time?

REVIEW
*I received a free copy of this book which I voluntarily chose to write an honest review for.
Just when I think that I cannot possibly love this series any more we get a new one that just proves me wrong! This whole bean to bar thing is fabulous. I love me some chocolate so following Felicity as she creates new and yummy things to make with it really makes my day. This time Felicity and her crew are thinking of undertaking an event that would have them recreate a metal boat sculpture completely out of chocolate. This would be a display only so quality of the chocolate is a moot point making it easier to buy pre-made cheap chocolate. The job has begun with lots of volunteers when suddenly the power goes out, noises are heard though not seen, and when the power is back there is not one but two people dead. Now it becomes a race to solve the mystery before the event so they don't lose all the money they put into it or let it get cancelled. This leads to all sorts of surprises and secrets that keep the story moving while you are also rooting for them to finish the chocolate ship. Add in the adorable bunny and the quirky bird which makes it impossible to put it down once you get started. A total must read series. I totally loved it so I give it 5/5 stars 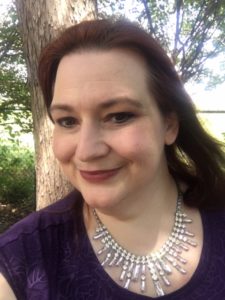 Amber Royer writes the CHOCOVERSE comic telenovela-style foodie-inspired space opera series, and the BEAN TO BAR MYSTERIES. She is also the author of STORY LIKE A JOURNALIST: A WORKBOOK FOR NOVELISTS, which boils down her writing knowledge into an actionable plan involving over 100 worksheets to build a comprehensive story plan for your novel. She blogs about creative writing technique and all things chocolate at www.amberroyer.com. She also teaches creative writing and is an author coach. If you are very nice to her, she might make you cupcakes. Chocolate cupcakes, of course.