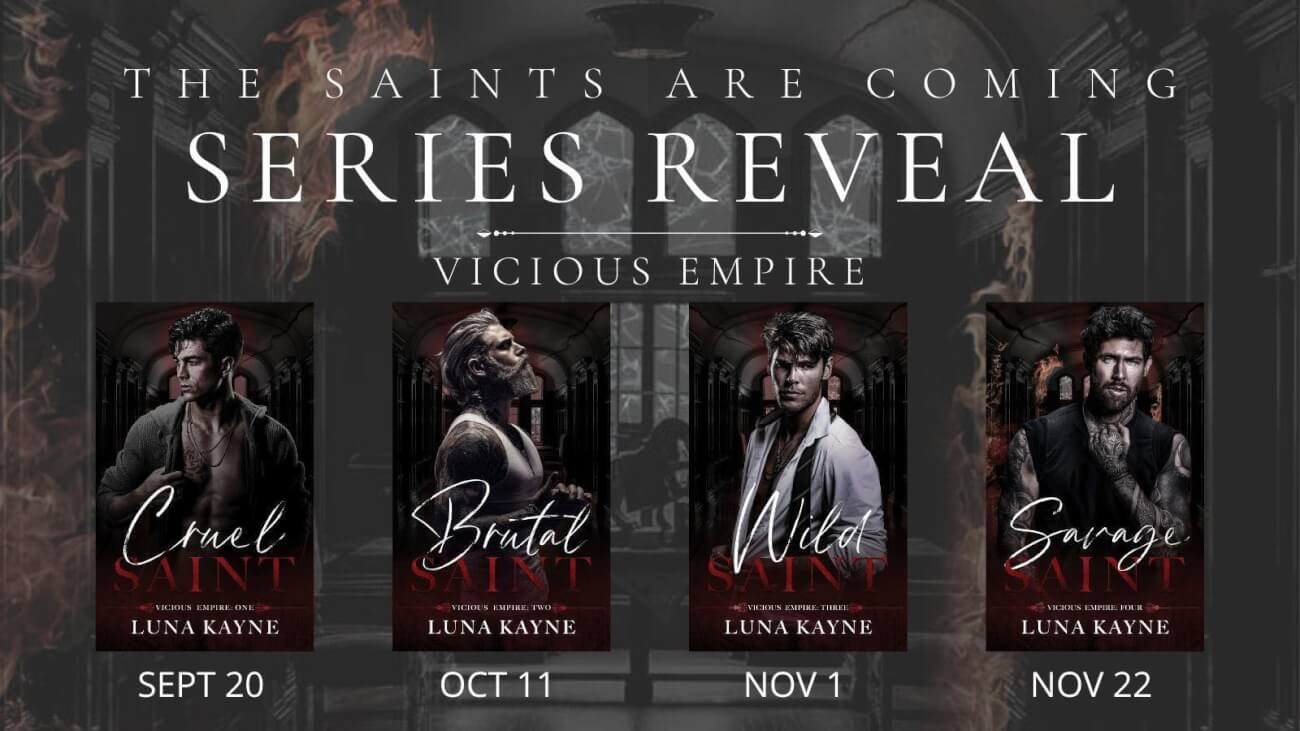 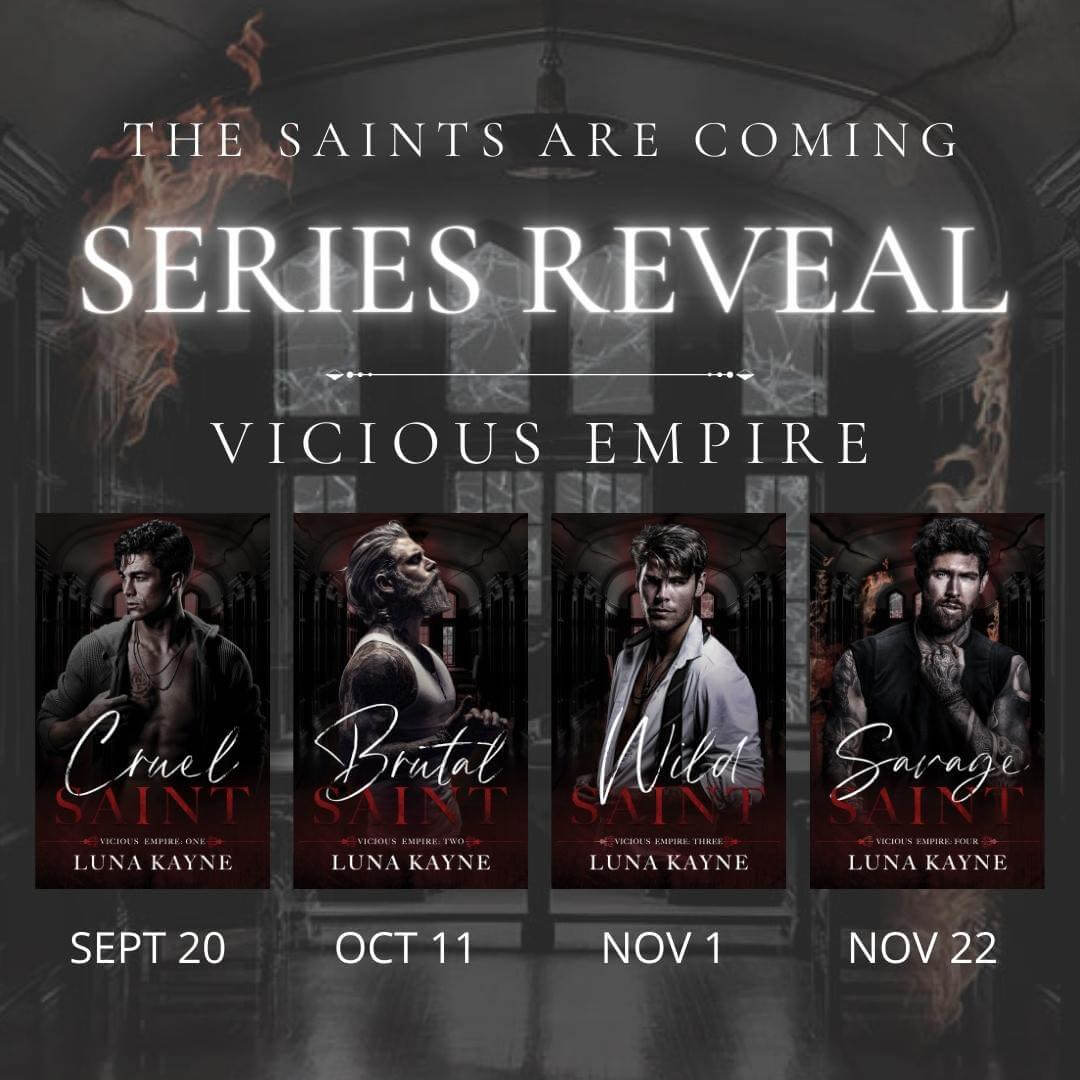 CRUEL SAINT
(Vicious Empire #1)
Release Date: September 20th
Cover Design by: The Pretty Little Design Co.
Photographer: Wander Aguiar
Cover Model: Kyle Kriesel
Add to Goodreads: https://www.goodreads.com/book/show/61281277-cruel-saint
PREORDER IS AVAILABLE!!! books2read.com/CruelSaint
Blurb:
HE WAS HER FIRST FOR EVERYTHING.   NOW HE’S DETERMINED TO BE HER LAST.   RYDER SAINT Amara is my dark obsession. She was promised to me in a deal she knows nothing about. Four years ago, I sent her away to protect her from the life I live as the son of a crime lord. Now her brother—my best friend—is dead, and though I wasn’t there for him in the end, I intend to look after his little sister. I should stay in the shadows, let her live the life her brother wanted for her, but one look at her and I know I’m the only one who can save her…but I’ll have to break her first. Good girls keep their promises, and it’s time Amara came home—to me—where she belongs.   AMARA SCOTT As far as I’m concerned, Ryder let me go four years ago and I never looked back. Until the day he shows up demanding I come home, and I have no choice but to return when he forces my hand. The Saints never pay for their crimes. They take what they want and discard the rest. Like me… But I’m not that weak girl anymore, and I’m packing secrets of my own. I’ll use my time to find out who killed my brother…then I'll destroy them. Even if that man is Ryder himself.   * Cruel Saint is the first book in the Vicious Empire dark romance family saga series. 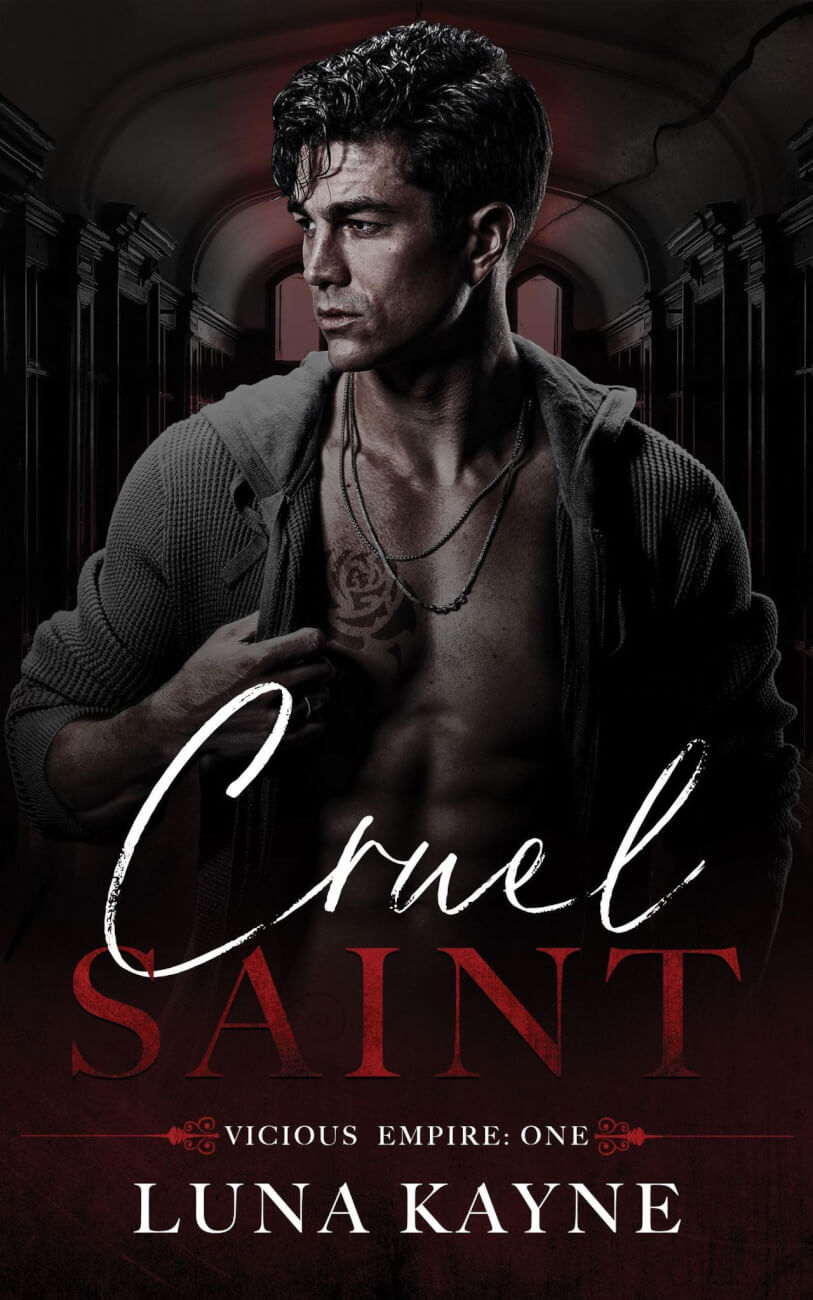 BRUTAL SAINT
(Vicious Empire #2)
Release Date: October 11th
Cover Design by: The Pretty Little Design Co.
Photographer: Wander Aguiar
Cover Model: Josh Mario
Add to Goodreads: https://www.goodreads.com/book/show/61281286-brutal-saint
PREORDER IS AVAILABLE!!! books2read.com/BrutalSaint
Blurb:
HARLOW IS HUNTING HER SISTER’S KILLER. AND COLE IS HUNTING HER.   COLE SAINT   The woman my family is looking for is the one-night stand I can’t get out of my head, and her life depends on me getting to her first. Harlow is sunshine and light. I live in the shadows, among the dark and the damned, but there’s something about Harlow that makes me want to take care of her. I can protect her from what’s coming, but first I need to find her, and I’m closing in. I learned my lesson the first time, and I won’t give her the chance to get away from me again.   HARLOW STINTON   What are the chances that the man I shared a toe-curling, name-screaming, raging hot one-night stand with is part of the crime family that’s after me because I saw something I shouldn’t have? One hundred percent. The chances are one hundred freaking percent. At least I wasn’t stupid enough to give him my real name. Now I’m on the run with everything I own stuffed into a tattered backpack. I never thought I would see Cole again, but I was wrong, and we’re no longer strangers who shared a night. Now we’re on opposite sides of a war that threatens to tear our worlds apart.   **A portion of this book was originally published as a 5,000 word novelette titled Missed Me which is no longer available. 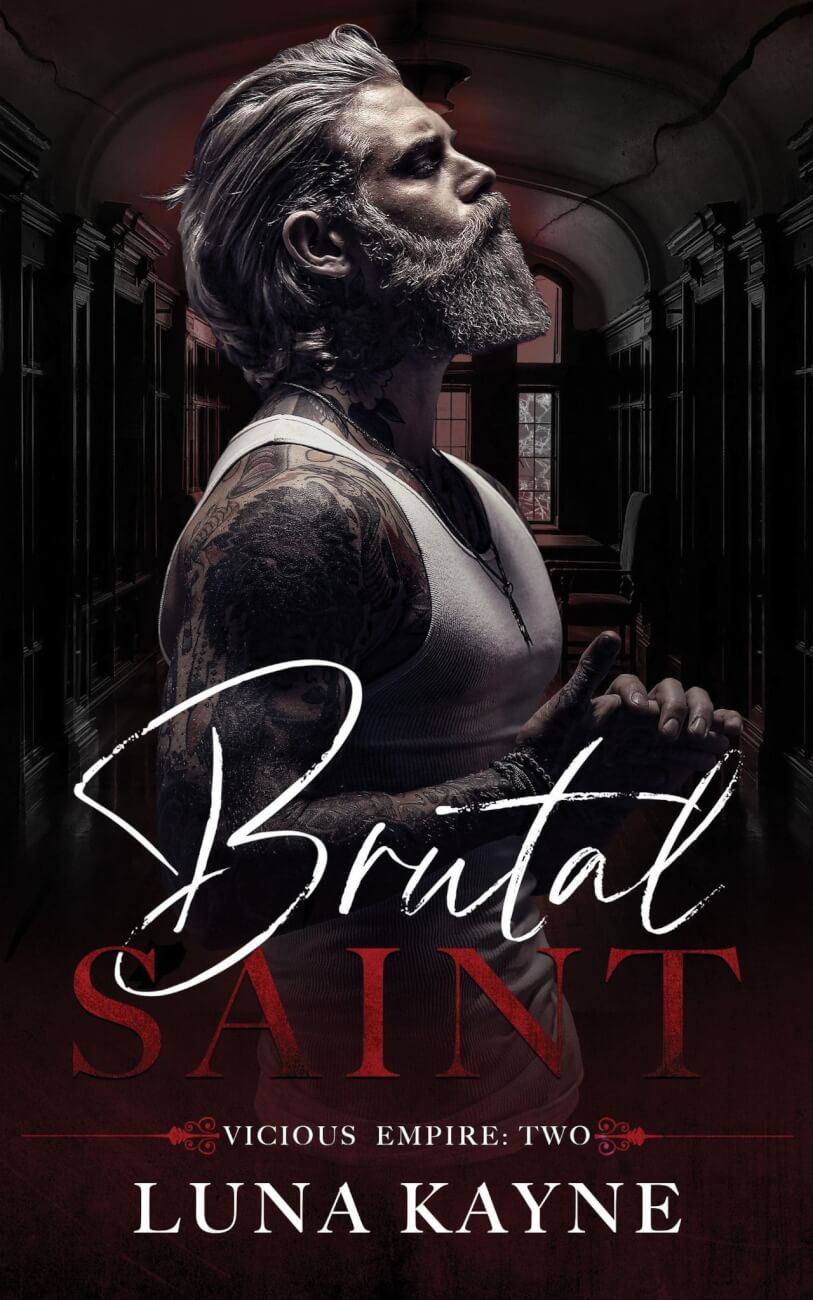 WILD SAINT
(Vicious Empire #3)
Release Date: November 1st
Cover Design by: The Pretty Little Design Co.
Photographer: Wander Aguiar
Cover Model: Zakk Davis
Add to Goodreads: https://www.goodreads.com/book/show/61281303-wild-saint
PREORDER IS AVAILABLE!!! books2read.com/WildSaint
Blurb:
SHE BEAT HIM AT HIS OWN GAME ONCE. NOW IT’S ROUND TWO, AND THIS TIME THEY’RE PLAYING DIRTY.   DAGEN SAINT   Five years ago, Nyla stole two million dollars from me and disappeared. Now she’s resurfaced, and I’m determined to settle her debt…one way or another. Hiking in the mountains in my underwear while being hunted by hitmen wasn’t something I thought we’d be doing when I woke up this morning, yet here we are. If we can settle our issues and work together, we just might make it out alive—if we don’t kill each other first.   NYLA JENSEN   I conned the con five years ago, but he took something I wasn’t prepared to leave behind—my heart. Now I’m stranded in the wilderness with the one person who has every reason to hate me, and we have no choice but to work together, or we’re dead. It turns out surviving the elements and the men who are searching for us is the easy part. The hard part is being close to Dagen, coming clean, and looking him in the eye. Those same eyes I see every time I look at the daughter he doesn’t know we have. 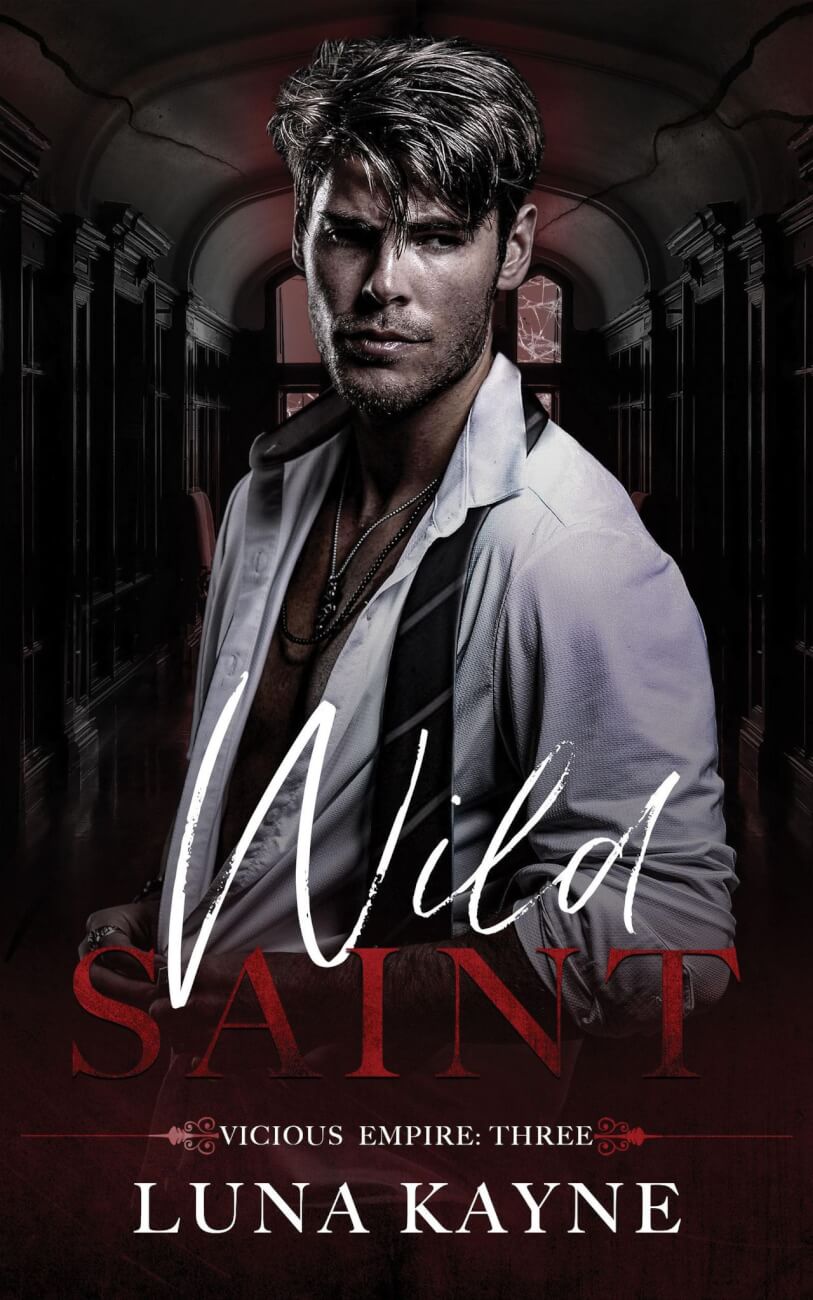 SAVAGE SAINT
(Vicious Empire #4)
Release Date: November 22nd
Cover Design by: The Pretty Little Design Co.
Photographer: Wander Aguiar
Cover Model: Clayton Wells
Add to Goodreads: https://www.goodreads.com/book/show/61633287-savage-saint
PREORDER IS AVAILABLE!!! books2read.com/SavageSaint
Blurb:
REGARDLESS OF OUR NAME, WE ARE NO SAINTS. LUCKILY, THE WOMEN WE LOVE ARE AS WICKED AS WE ARE.   LENNOX SAINT I am who I am for a reason. The monster the world sees when they look at me was born twenty years ago to protect my brothers from the same fate I endured on my sixteenth birthday. I locked my broken self away, until the night I met Sloane. She was both forbidden and everything I’ve ever wanted all wrapped into one, and I wanted her, but I wasn’t the only one. In the end, she made her choice and it wasn’t me—or so I thought. Now that I know the truth, I’m taking my life back piece by piece, even if I have to carve it out of the flesh of anyone who stands in my way. Sloane is mine, and I will die on this hill—but not before everyone else dies first. SLOANE PENNER I loved two men once. I made a choice, but the man I chose, didn’t choose me back—or so I thought. When a secret I didn’t know I had comes to light, my life as I knew it ends in a flash. Now I’m a pawn in a game with no rules, and I refuse to play the part I’ve been handed. The only way to win is to be the queen and I’m taking the throne to protect my son. To stay alive, I have to make a deal with the devil and hope it’s the lesser of all the evils that surround me. I’ve lost too much and I’ve had enough. I will burn this vicious empire to the ground, and from its ashes, I will rise. 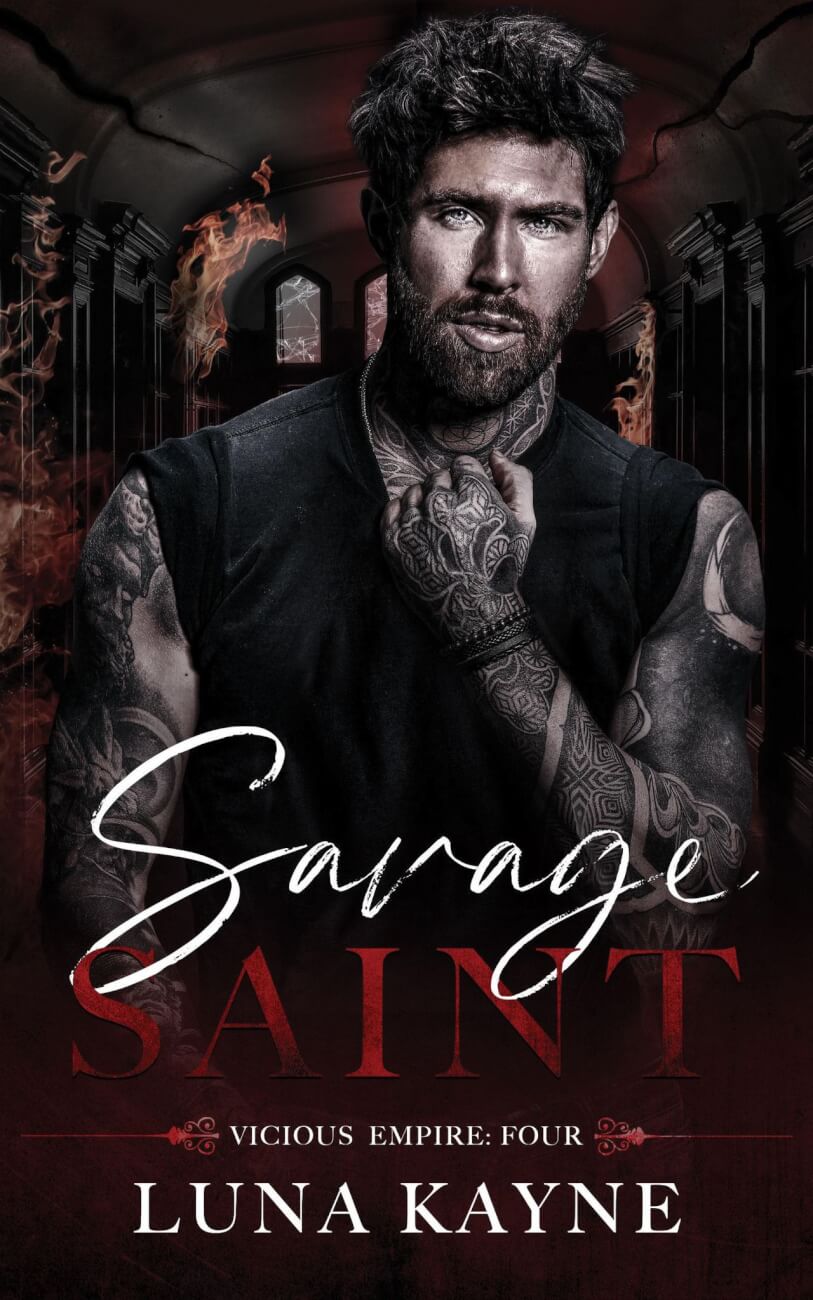 About the Author:
LUNA KAYNE is a romance author located in Canada. She writes dark romantic suspense with a hint of humor and a heaping dose of angst. Her men are dominant and often stubborn, and her women are usually underestimated. Luna is the pen name of author Sheri Landry who writes non- romance action thrillers, and has won awards under both names. Gardening relaxes her, she dislikes long winters, and she doesn’t understand how commas work. 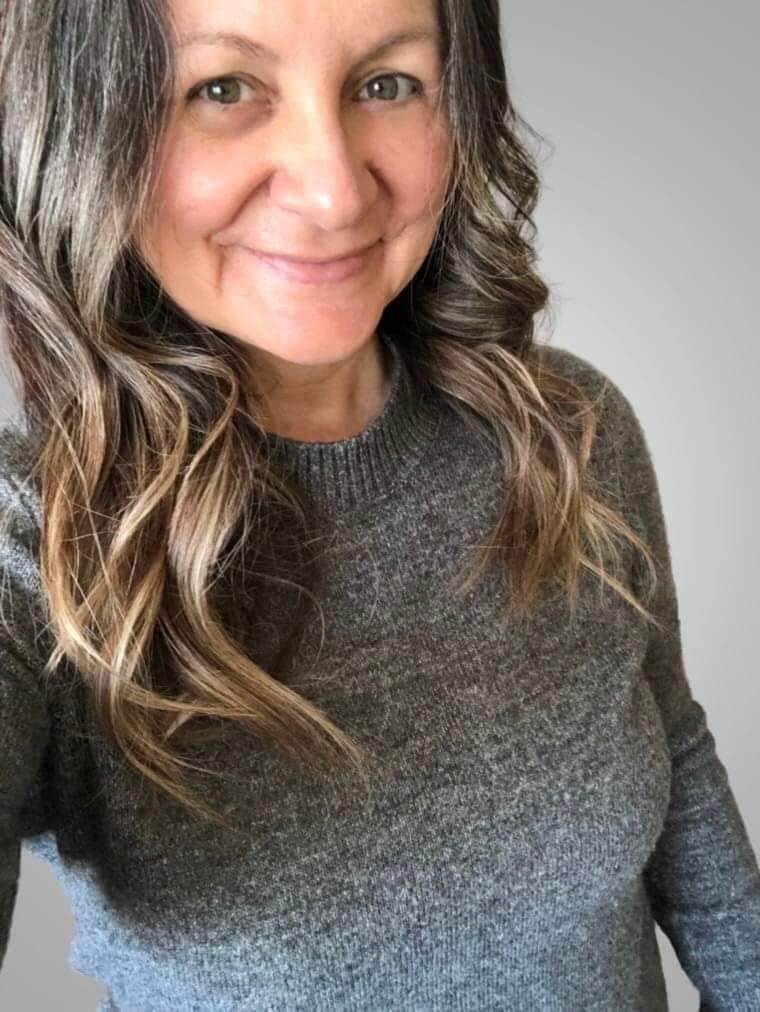