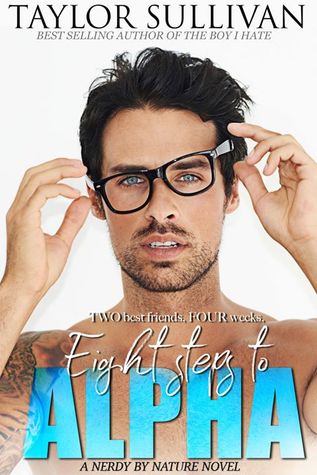 
Elliot Prescott has one question for his ultra-nerdy roommate and best friend, Fe Porto.
Why can’t he get the girl?
And she has an answer for him. Or maybe eight.
With five years of best-friend hood under their belt, they’re about to embark in the project of a lifetime.
To make Elliot alpha.
The only catch? They have just four weeks to turn the video game loving Elliot, into a cocky, sexy, tattoo clad beast Fe has read about in her romance novels.
Can they do it? Or will the flitter of love that’s been brewing under the surface finally get the kindling it’s been longing for?

Goodreads / Amazon
—
EXCERPT:
It only took a few minutes before Fe was back and for Elliot to realize she had absolutely no clue how much he bench-pressed. She brought him the wrong size. In fact, she brought him shirts so small, he was pretty sure it would fit a juvenile boy. Elliot was a man, a six-foot-two, two-hundred-pound man, and there was no way these suckers were going to fit him. “Wrong size,” he said, throwing the shirts back over the door. “I need an extra-large.” He flexed his chest in front of the mirror to prove his point. Did she not see this? Did she not notice these weapons of mass destruction?
The shirt came flying back over the stall, the hanger barely missing his head by a fraction. “You wear a medium. Put it on.”
He opened the stall door, not caring he wore no shirt, and flashed her a free sample of the gun show. “Fe, come on? Are you serious?”
She smirked a little, her dimple taunting him. “Your clothes are too big, Elli. That’s part of the problem.”
He raised a brow. “This,” he argued, grabbing the shirt from its hanger, “won’t fit over my right bicep.”
She laughed, in a way too amused sort of way, then came forward, took hold of the door handle, and closed it. “Put. It. On.”
So, he did. And it wasn’t easy. It was sort of like squeezing a python into a hamster hole. But he put it on to appease her, opened the door, and found Fe, immediately covering her mouth to suppress laughter. She eyed him up and down, did the little twirl thing with her finger again, and he turned happily, because she was smiling again—and he’d do anything to make her smile.
The shirt was white, almost see through because the fabric was pulled so taught, and the sleeves were wrapped around his arms like the casing of a sausage. When he made it full circle, he found her eyes locked on the band of skin right above his waistline. The shirt was a good four inches too short, leaving his belly button, and happy trail completely exposed. He didn’t even know if she was aware what she was looking at, because she seemed as though she was in a trance. But there was no mistaking it—she was staring right there, her hazel-green eyes, like a wheat field hanging on to the barest amount of spring, stuck just a fraction of an inch above his zipper.
His mighty soldier inched toward a salute, and he turned toward the mirror. “I told you it wouldn’t fit,” he said gruffly, then closed his eyes and forcibly cleared his throat.
God damn it! Why did this happening to him? At the worst possible time? He began saying Hail Mary’s in his head and tried to calm himself down.
It wasn’t working.
“I’ll go get you a large,” Fe whispered, closing the door quietly behind her.
Good. He thought. Good. 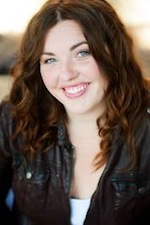 Author Bio:
Taylor is mom of three young (or not so young) children she loves more than life. She runs them around endlessly, hoping she looks presentable enough to be out in public, and day dreams about fictional characters. Maybe she's crazy, or maybe she craves the barbie games she played as a little girl a little too much, but that's where her stories are born. It's where they blossom, and grow, and eventually breath life on the page of her stories.