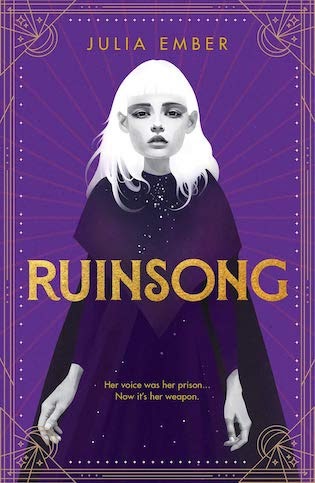 In Julia Ember’s dark and lush LGBTQ+ romantic fantasy Ruinsong, two young women from rival factions must work together to reunite their country, as they wrestle with their feelings for each other.

Her voice was her prison…
Now it’s her weapon.

In a world where magic is sung, a powerful mage named Cadence must choose between the two. For years, she has been forced to torture her country’s disgraced nobility at her ruthless queen’s bidding.

But when she is reunited with her childhood friend, a noblewoman with ties to the underground rebellion, she must finally make a choice: Take a stand to free their country from oppression, or follow in the queen’s footsteps and become a monster herself.

I allow Lacerde to dress me without turning to examine myself in the mirror. I don’t want to see how I look, how they’ve fashioned me. In my mind, I already see stains of blood on the muslin fabric of my skirt, dotting the white leather of my gloves. Lacerde adjusts my skirt and smooths my hair. Then, with a grunt, she bends down and buffs my new shoes to a gleam.

She opens the door for me so I don’t get my gloves dirty and leads me down the dark corridor. My dressing room is the only one in use. All the others are boarded up, so that no one will use them to hide.

I imagine what the Opera Hall must have been like years ago, when so many singers performed here together for more willing audiences. The corridors would have been filled with the sounds of laughter, rustling taffeta costumes, and a chorus of warm-up scales. Above, the audience would be straining to get inside the house, clinking glasses together at the theatre bar, speculating on the wonders to come.

If I strain my ear, I can still hear the echo of their merriment in the walls, obscured by the more recent cacophony of despair and pain. The smell of thousands of spellsongs, layered atop one another for centuries, lingers in the musty air. It’s been eight years since this place functioned as a real theatre, but the Opera Hall remembers.

We climb the stairs up onto the stage. Elene and Lord Durand, her newly elevated pet footman, stand together on the edge, shouting instructions down to the conductor in the orchestra pit.

Elene glances up and nods to Lacerde, who positions me at center stage without releasing me. It’s as if they think I will run, even though there is no where to go.

No one has dimmed the gas lamps that line the theatre’s aisles yet, so I have a full view. The theatre is much grander than our replica at the academy. The ceiling bears a centuries-old mural of Adela gifting the first mage with magic. The singer kneels beside the sacred pool, and the goddess rises from the water, her mouth open with song and her arms spread wide. Musical notes surround them, each flecked with real gold leaf.

Portraits of the three other goddesses border the mural. Odetta, the goddess of spring and renewal, wearing a silver mask that covers her eyes and cheeks, and holding a sparrow’s skeleton in her cupped hands. Karina, goddess of justice and winter, thin and draped in a linen sheath, with her arms wide. Marena, the autumn goddess of war, chin lifted proudly, staring down with her hypnotic purple eyes, bejeweled with human teeth.

Beneath, row upon row of tightly packed red velvet seats stretch back to the imposing black doors at the rear of the theatre. They’re made from mageglass, a material designed by the elementals: sand spun, dyed and hardened so that not even diamond bullets could shatter it. Hundreds of people will fill the house tonight. Dame Ava, the queen’s former principal, told me that sometimes there are so many that folk have to stand along the walls.

My knees start to shake at the sight. My mouth goes dry.

All these seats. All these people. My unshed tears blur the rows of red seats together, like a smear of blood. 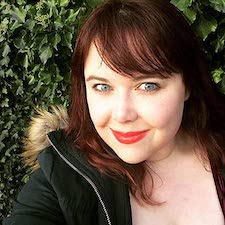 Julia Ember is the author of The Seafarer's Kiss duology, a Norse myth inspired retelling of The Little Mermaid, published by Interlude Press (Duet Books), and Ruinsong, a standalone high fantasy reimagining of The Phantom of the Opera, forthcoming from Macmillan Kids (FSG) in November 2020. She lives with her wife and two fluffy cats in the Pacific Northwest.