Release Blitz & Review for Razor: The WIld Ones by Jessie Cooke & Suzy Wilson 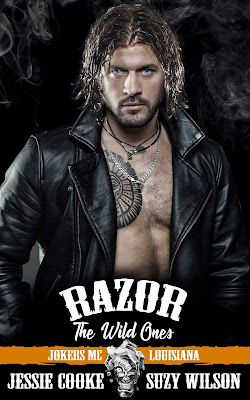 Frasier “Razor” Trahan never passed up a stray, but his entire life he was told, first by his parents, and then the president of his club, that he couldn’t save everyone, but that wasn’t going to stop him from trying. So even while Razor was on the run from his own troubles, the temptation of a beautiful, petite, dark-haired “stray” along the side of the road was just too much for him to resist. Razor will discover two important things quickly, however. First, keeping this one safe and alive will be much more difficult than what he’s used to. And secondly, giving this one up is going to hurt a lot more.
Kayleigh and Bobby were high school sweethearts. She thought she knew everything about him, and she thought moving from her father’s house to Bobby’s house would be the first step to the fairytale ending she’d dreamt of her entire life. Unfortunately, life had other ideas. Bobby wasn’t who she thought he was, and her fairytale ending quickly turned into a nightmare when she became the only witness to his murder. Unable to turn to her father, Kayleigh does the only thing she can think of, she takes Bobby’s hidden stash of money, and runs. But now Kayleigh has to decide if she’s ready to face her biggest fear: being alone, or strong enough to accept help from the giant man with the leather kutte and troubles of his own brewing behind his beautiful eyes.
Razor and Kayleigh join forces to battle both of their demons. They have the help of the Jokers, but even with New Orleans baddest bikers on their side, they’re going to need much more than that to make it out alive.

*I received a free copy of this book which I voluntarily chose to write an honest review for.
Another great installment to this MC series. This time we get to know Razor just as he has to leave town in order to lay low for awhile when a rival MC frames him for a murder he did not commit. Along the ride he runs into Kayleigh a sweet woman who saw something she shouldn't have, as well as some other events, that is also on the run. Fate throws them together and the instant connection goes to work from there. Shows a fantastic inside look into the brotherhood of bikers as they all work together when things get rough. Makes for a great book. I really liked it so I give it 4/5 stars. 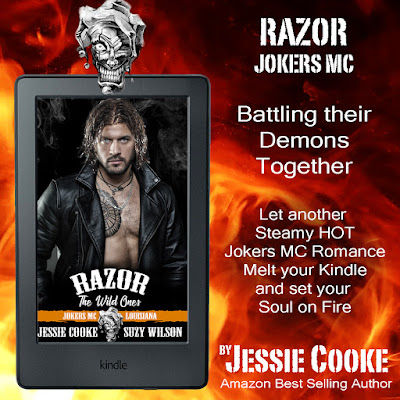