Blog Tour, Character Interview, Review, & Giveaway for A Glimmer of a Clue by Daryl Wood Gerber

From the story, you learn that I actually did see a fairy when I was younger. When my mother died, I could no longer see the fairy. I’d forgotten that I ever had, of course, because as we grow up, often our childish sensibilities vanish. But when I opened Open Your Imagination and Fiona appeared, I was, needless to say, shocked. She said it was because I was willing to give up on the tried and true, spread my wings, and take a chance on my new shop.

As for something the readers might not guess about me? Hmm. I’ve always been quite competitive. Honestly, I’d like to be “less competitive” going forward. I don’t need to win, necessarily, but I do like to compel myself to be the best I can be. I suppose that part of my nature shows up whenever I hang out with Brady, a friend from high school who is now the owner of the Hideaway Café. Our competition is fun. Challenging him makes me laugh. As for pickleball, a game I’ve recently picked up, I have to admit I’m not very good. I’d be better, I suppose, if I committed more time to it, but I simply have too much on my plate.

She started making fairy gardens of her own and allowed me to give her inspiration for some of her gardens. She has always loved the name Courtney and, being a bit Irish herself—my father’s family is Irish—she and I appreciate similar backgrounds. We both love Ireland. We both love gardening. We both love magical, light-heartened fun. When she started to create my shop for me, I gave her pointers as to what would work best and where. She has never worked in retail, so it was up to me to give her tips. She, on the other hand, is a baker, so I allow her to guide what treats we serve at our weekend teas on the patio.

Oh, gosh, is that even nice? I mean, I like Daryl. Like me, she is driven to do the best she can. But if I was honest with her, I’d tell her she needs to lighten up a bit. Read more. Dream more. She laughs. In that way, we’re very similar. She wishes she could see a fairy like Fiona. I keep telling her that she will. One day. She just has to be patient. I’ve suggested she take long walks in forests looking for fairy rings and fairy portals. And she has to continue to make fairy gardens to open her heart to the possibilities. When she gets sad—and she does get quite sad—I urge her to remember about the great beyond, where all souls meant for each other will meet again.

It’s probably because I am supposed to inspire readers to hope. To believe in magic. To dream. Fiona sees this as one of her missions, as well, so as a team, we are united in that way. Also, we’re supposed to continue helping others around us solve problems. It’s her mission and the only way she can find her way back to the fairy kingdom.

Well, Fiona of course. Can you imagine what she might do if I told you otherwise?

It’s sad to say but I simply was never a fan of Lana Lamar. It’s a good thing I was never considered a suspect. She was simply too rude for words, to everyone. Bullying should not be tolerated, and that’s what she is . . . was.  Am I giving something away by saying that she is the victim in this story? Most likely not. I would suppose you’ve probably already shared what the story is about. There are no secrets when it comes to basic storylines. Publishers put them on books. I’ve heard these are called teasers or blurbs. So it’s not a teaser to say I didn’t like Lana.

Oh, I’m so excited. Daryl has written another of my stories. So far, all I know is a well-to-do woman in town wants to have a birthday party for one of her sorority sisters. It’s not going to be a bash. She wants it to be intimate, with other sisters invited, but she wants it to be a fairy garden party. I’ve thrown a few of those for children, but I’ve never done one for adults. I’m quite excited about it. I’ll have to think outside the box when it comes to party games and foods and such. I think I should ask the Hideaway Café—that’s Brady’s place—to do the catering. He is so eager to see a fairy. Maybe that would give him the chance to open his heart a little bit more . . .

About A Glimmer of a Clue 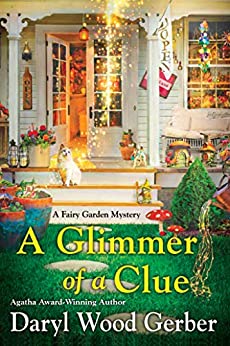 A Glimmer of a Clue (A Fairy Garden Mystery)

Courtney Kelly has a shop full of delights, a cat named Pixie, a green thumb—and a magical touch when it comes to garden design. But in Carmel-by-the-Sea, things aren’t all sweetness and fairy lights . . .

When Courtney’s friend Wanda gets into a ponytail-pulling wrestling match in public with a nasty local art critic, Courtney stops the fight with the help of a garden hose. But Lana Lamar has a talent for escalating things and creating tension, which she succeeds in doing by threatening a lawsuit, getting into yet another scuffle—in the midst of an elegant fundraiser, no less—and lobbing insults around like pickleballs.

Next thing Courtney knows, Lana is on the floor, stabbed with a decorative letter opener from one of Courtney's fairy gardens, and Wanda is standing by asking “What have I done?” But the answer may not be as obvious as it seems, since Wanda is prone to sleepwalking and appears to be in a daze. Could she have risen from her nap and committed murder while unconscious? Or is the guilty party someone else Lana’s ticked off, like her long-suffering husband? To find out, Courtney will have to dig up some dirt . .

REVIEW
I am a huge fan of Gerber's work due to skilled writing style but I especially enjoyed book one of this new series. This made me eager to get my hands on this second book which is just as good, if not better, then book one. We catch back up with Courtney as she runs her adorable garden shop. The local.FIFA Lana is causing lots of conflict that Courtney tries to avoid but then she finds the woman dead stabbed with a letter opener from one of fairy gardens. Wanda, her BFF's mom, is standing over her in a daze. This makes her the main suspect but Courtney is determined to prove otherwise with the help of our two favorite fairies. This is a well written cozy that allows the reader to easily picture the setting while also bringing the characters to life sprinkled with a touch of magic. Makes for a fabulously fun read. I totally loved it so I give it 5/5 stars.

Agatha Award-winning author Daryl Wood Gerber writes the nationally bestselling Cookbook Nook Mysteries, the Fairy Garden Mysteries, and the French Bistro Mysteries. As Avery Aames, she pens the popular Cheese Shop Mysteries. In addition, Daryl writes the Aspen Adams novels of suspense as well as stand-alone suspense. Daryl loves to cook, fairy garden, and read, and she has a frisky Goldendoodle who keeps her in line!