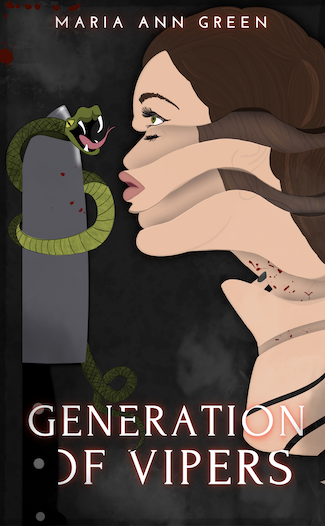 Rosabella Moore-Davis has just moved her husband halfway across the world, with a spur of the moment purchase–a glorious gothic mansion–while on vacation in France. It was love at first sight, and somehow she knew it was more than just some huge house; it was meant to be her home.

But not all things that are meant to be end happily ever after.

Rosabella soon finds herself waking in the middle of the night from more than just wind and creaking pipes. In the dark she discovers ghostly figures looking up into her windows from outside, rooms and treasures previously hidden for centuries, creeping crawling guests, and too many dark shadows lunging toward her. And still, somehow, instead of screaming and running away she researches, choosing knowledge over fear, and learns more about the house and the history of this place she loves so much.

Only when she stumbles into the past, meeting an aristocrat hiding enough deadly secrets to take down the patriarchy, does Rosabella start to regret her choices. And after having come this far, she worries it’s too late to turn back and save herself from a house that has more skeletons in its vast amount of closet space than anyone expected.

Rosabella isn’t the fleeing type, but she’s not sure she’ll survive the fight. Especially against a place with so many stories buried beneath it, burned into every fiber of the edifice, a house with a portal to dark places and troubles that shouldn’t be stirred up.

Generation of Vipers is a mix of crimson peak and Mike Flanagan’s Haunting of Hill House, with elements of Marisha Pessl’s Night Film mixed throughout.

If you like dark thrillers that border on horror, gothic elements, and deliciously dark twists that will keep you guessing, then Generation of Vipers might be your next favorite book. It’ll keep you reading just one more page all night long, too afraid to turn out the light and go to sleep.

There’s no disorientation, even though there should be.

Between stone walls and wallpaper older than my three decades, the cold air isn’t a surprise.

But what does scare me isn’t the new setting or the snoring of my sweet husband but the feeling that something just left. Like I’d been watched and only noticed after it ended.

Though, I don’t know if I was dreaming or if something external woke me up.

Milos’s breath is soft, even if it rumbles in the back of his throat just a little. And I’ve slept next to it for years without jarring awake like this. As another creak sounds, followed by a tiny clunk, I know I’m right.

Maléfique has old bones, and they must protest changes in temperature as we take our trips around the sun.

The little noises aren’t really enough to have woken me up either. I don’t think so anyway.

Still, whatever the reason, I’m up now. Wider awake than I was when we were taking in the newness of our manor earlier. My eyes flick to the clock Milo insists on bringing with us every vacation, and I correct myself. It was now yesterday that we bought this beautiful space, considering it’s three in the morning.

I’ll never get back to sleep right now.

So I slip out from under the comforter and let my toes touch the chilly wood of the floor. I move slowly, quietly, even though I doubt Milo would wake up for anything less than my screaming.

Heaviest sleeper I’ve ever met. Which he proves with a snort as he moves to face the other way, still very much unconscious.

And as I move toward the huge window of our new bedroom, I roll my eyes at Milo for the second time in the last twenty-four hours. It happens without forethought, and of course I feel instantly guilty after.

That’s when a kinder smile touches my lips just before my fingertips, then my forehead, touch the thick glass, as I lean against the window and look down at the greenery of our property.

Well, it’s all shades of gray and black at the moment, with the moon behind the clouds.

I can still make out plenty, though.

The woods just beyond an overgrown garden, a path starting just between two picturesque weeping willows—the kind that beg for a swing, or a hammock strategically placed for reading. I can see all of it well enough, but when the moon peeks out between two wisps of cover, my eyes scan harder, searching for something. I’m not even sure what.

Maybe for what could have woken me up if it wasn’t Maléfique.

And I’ve all but given up as the tall grass waves in a darkening breeze when something sparkles and pulls my eyes back to the opening of the track, the archway between hanging branches.

Though, not something. No. 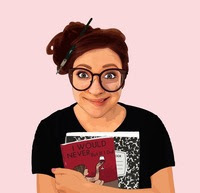 Maria, a badass USA Today and internationally bestselling indie author, lives in Minnesota despite the frozen winters. Actually, she prefers snow drifts and icicles over summer and all that sweat running everywhere. She writes about bitches, breakups, and bloodbaths – not in any particular order. She lives with her husband and little family, which includes a few lazy cats who make great lap warmers. You can usually find her whishing that she lived in a secret cabin in the woods where she could be a hermit reading and writing all of the time. Instead she lives the suburban life where she pretends to her neighbors and the other moms around that she doesn’t swear like a sailor, have hidden tattoos, and loves a good bottle of wine. She absolutely believes in unicorns and ghosts and hopes vampires and monsters are real too. She’s a coffee-in-the-morning and alcohol-in-the-evening kind of person, preferably with a nap in between. Maria prefers cats over dogs, books over people, and late nights over early mornings. She probably shouldn’t talk to anyone until she’s had her first cup of coffee, extra sugar. And if you ever want to hang out with her, you’ll have to be game for a horror movie or just a quick run to target for two (hundred) little things. Also, you couldn’t pay her to be in her twenties again; Thirties is where it’s at. She’s a creative, mouthy, introverted, proud bisexual, highly-sensitive INFJ, chronic pain spoonie warrior, Slytherpuff, dork with a sweet-tooth.

Maria devours books, reading mostly in bed or listening to audiobooks in the car. Writing has been one of her passions for pretty much her whole life. So creativity is a necessity for her, always. After working in the mental health field for almost a decade, she’s now living her dream as a stay-at-home writer, kiddo wrangler, professional snuggler, and constantly-tired-person. When it comes to her writing, she specializes in dark and twisted thrillers or gritty, angsty contemporary romances. But no matter the genre, she always prefers writing deeply flawed characters with dysfunctional relationships. She’s pretty sure the whole “unlikable character” thing is a conspiracy because every character she loves have been labeled this way. Ridiculous. And because of this, she’s pretty much found it impossible to write anything without at least a little mayhem.

Maria was once told she painted with her words, and that phrase stuck with her – because writing really is an art, and good stories are true masterpieces. She’s always trying to grow and improve in her craft, shooting for a masterpiece of her own someday. And she plans to write forever because writing gives Maria the ability to disappear into new worlds and create people within twisting plots, all from the comfort of her couch. She will always believe that though not every story is for her, and her stories aren’t for everyone, every story has a reader.

For more from Maria find all of her links, including a link to get more content at her newsletter, here: linktr.ee/mariainmadness