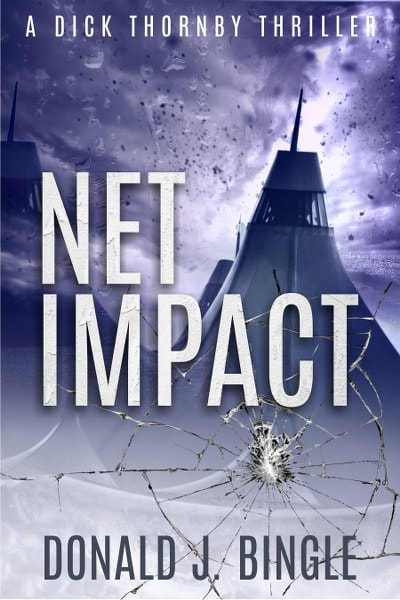 Dick Thornby is not Hollywood's idea of a spy. He's a new kind of spy for a new kind of world.
In his rough and tumble job there are no tailored Italian suits, no bimbos eager to please, and no massive underground fortresses built by evil overlords seeking world domination—just an endless series of sinister threats to the safety and security of the billions of mundane citizens of the planet. Sure, Dick's tough and he knows a few tricks to help him get out of a tight spot, even if his boss accuses him of over-reliance on explosives. But he's also got a mortgage, a wife upset by his frequent absences on "business" trips, and an increasingly alienated teen-age son who spends way too much time playing in gaming worlds on the computer.
When a mission to bust up an arms exchange in New Zealand goes spectacularly bad, Dick is thrown into a maze of conflict involving Hong Kong arms dealers, cyber-criminals, Chinese government goons, and even militant Maoris. When a young computer expert back at the Philadelphia headquarters for The Subsidiary, an international espionage agency created in the aftermath of 9/11, discovers that the bad guys are involved in a vast conspiracy. Dick is forced to partner with the espionage neophyte to battle evil on multiple fronts, leading to a final confrontation that incorporates real-world conspiracy theories and cutting-edge technology.
In the end, Dick can save his partner, save his marriage, save his son, or save the world, but he can't do it all.
Says Spy Guys and Gals: "What a terrific ride ... action, great characters, interesting twists, and enough suspense to make you both hold your breath and turn the page"
Says Game Knight Reviews: "This is a spy novel that intersects with the world of MMORPGs and combines a set of topics I haven’t seen before. It is a bit of The DaVinci Code with some James Bond and a modern virtual reality spin."
Available in trade paperback, ebook, and audiobook versions.
Want to continue the action? Look for Wet Work, the next adventure in the Dick Thornby Thriller series by Donald J. Bingle. Flash Drive, the third book in the series, is coming soon. Want more action? Check out the author's other thrillers: Forced Conversion; GREENSWORD; and Frame Shop. 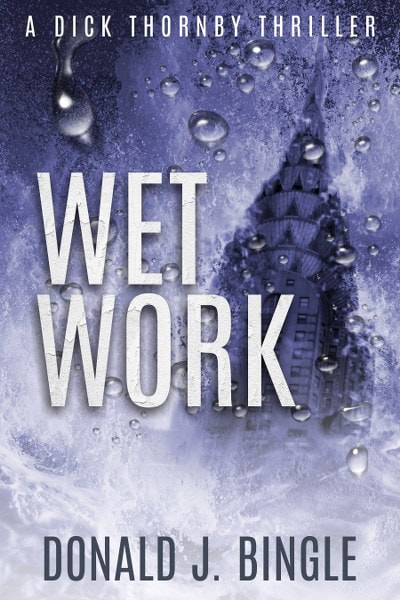 Dick Thornby is not Hollywood's idea of a spy. He's a new kind of spy for a new kind of world.
Dick's not a supercool guy in a tuxedo or a crazed loner who does nothing but kill and drive fast. He's just a regular guy with some skills for a job that needs doing. He also has a wife, a teenaged kid, a mortgage, and all the mundane problems associated with life. His friends from the New Jersey subdivision where he lives all think he is a wastewater treatment consultant. But instead of dealing with the dirty job of processing sewage in third world countries, he is really on missions, some mundane and dirty, others of vital importance and even dirtier.
After taking personal revenge on the criminal behind both his son’s injuries and the continued disintegration of his marriage, Dick Thornby is teamed with Acacia (“Ace”) Zyreb, a young, female agent from the East European office of the Subsidiary, to deal with the mystery behind coordinated hacking of the braking systems of several car models.
Doing his best to maintain his vows to his wife, Dick struggles to deal with the inexperience and provocative attitude of Ace on her first non-European mission. Their somewhat combative investigation takes a left turn by uncovering a much more sinister threat to the world and to Dick's family. He's willing to risk his job, his partner, and his life to eliminate the threat, but the clock is ticking.
Here's what Spy Guys and Gals had to say about Net Impact, the first book in the Dick Thornby series: "I love spy novels. I devote my hobby time to them. I write about them on my website. When I find a series that I really enjoy, I am delighted and that word most definitely applies to this series. It has action, great characters, interesting twists, and enough suspense to make you both hold your breath and turn the page (digitally in my case). I like Dick Thornby and I like reading about him and I hope to continue to do so."
Explosions! Action! Spycraft! Car Chases! Thrills! Mysteries! Conspiracies! Globe-Trotting! Sexual Innuendo! More Explosions!
Now available, Flash Drive, the third installment in the Dick Thornby Thriller series.
From the author of Net Impact, plus other fine thrillers, including Forced Conversion, GREENSWORD, and Frame Shop.
Add to Goodreads
Amazon * B&N * Kobo * Audible 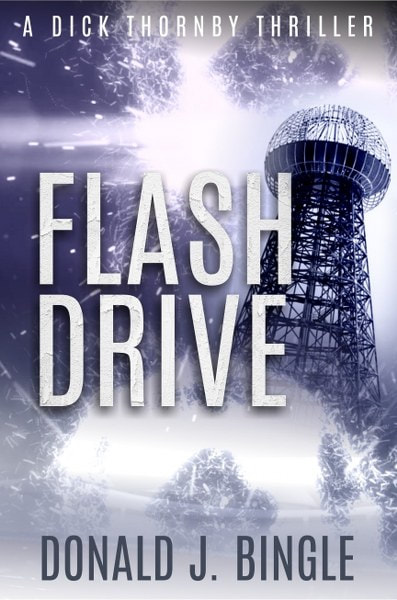 Dick Thornby is not Hollywood's idea of a spy. He's a new kind of spy for a new kind of world.
Of course, it's complicated when you're an international spy with a wife, a kid, and a mortgage, but everyone thinks you're really a waste water treatment consultant. And, it's bad when your family finds out about your clandestine life, your wife wants to keep tabs on where you are, and your kid tries to emulate your espionage activities. But, it's downright dangerous for your career, your family, your colleagues, and your prospects of living until retirement when the powers-that-be at the Subsidiary discover you haven't been keeping the secrets you should have.
Forced to bring his family in tow on an off-the-books mission to investigate a mysterious flash in the middle of the Australian Outback, Dick Thornby has to contend with foreign agents, a sinister Japanese cult, outlandish conspiracy theories, and futuristic weapons from the past to save his family and himself while still completing his bizarre quest for the truth about what happened out woop woop and why so many people with weapons care.
“FLASH DRIVE builds on the universe that Mr. Bingle began with NET IMPACT and continued with WET WORK. This time, everyman spy Dick Thornby and his family are on a mission to… wait, huh? What secret agent in his right mind brings his family along on a dangerous espionage assignment? Find out inside this grand entertainment that sports an intriguing plot, well-written and thrilling action scenes, and a few laughs, too!”--Raymond Benson, author of Hotel Destiny—a Ghost Noir and The Black Stiletto Serial
“Dick Thornby, Donald J. Bingle’s domestic family man and international spy is back! And that’s a good thing if you want a danger-filled and thrilling adventure (and who doesn’t?) mixed with family-love and laced with Bingle’s signature wit. Do what needs to be done and get Flash Drive. A good time will be had by all!” — Steven Paul Leiva, Award-winning author of Blood is Pretty: The First Fixxer Adventure.
"Donald J. Bingle has, without a doubt, a sleek style of writing. Flash Drive is not run-of-the mill, for sure. The new Dick Thornby spy thriller sets a suspenseful, compelling espionage tale against a backdrop of what we often assume to be an imperturbable Australia."--Khaled Talib, Author of Spiral
Here's what Spy Guys and Gals had to say about Net Impact, the first book in the Dick Thornby series: "I love spy novels. I devote my hobby time to them. I write about them on my website. When I find a series that I really enjoy, I am delighted and that word most definitely applies to this series. It has action, great characters, interesting twists, and enough suspense to make you both hold your breath and turn the page (digitally in my case). I like Dick Thornby and I like reading about him and I hope to continue to do so."
Explosions! Action! Spycraft! Car Chases! Thrills! Mysteries! Conspiracies! Globe-Trotting! Exotic Weapons! More Explosions!
Read the entire Dick Thornby Thriller series, including Net Impact and Wet Work. From Donald J. Bingle, the author of other fine thrillers, including Forced Conversion, GREENSWORD, and Frame Shop.
Add to Goodreads
Amazon * B&N * Kobo 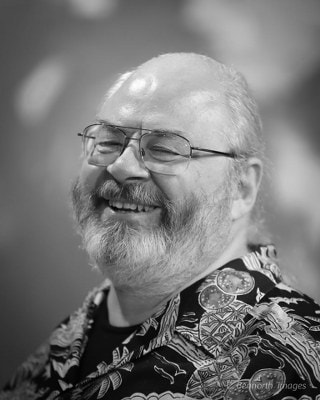 Donald J. Bingle is an oft-published author in the thriller, science fiction, fantasy, horror, mystery, steampunk, romance, comedy, and memoir genres, with seven books (including Flash Drive, Wet Work, Net Impact, Forced Conversion, Frame Shop, The Love-Haight Case Files (with Jean Rabe), and GREENSWORD) and more than 60 shorter stories, primarily in DAW themed anthologies and tie-in anthologies. Many of Don's stories are electronically available, individually or in his Writer on Demand TM collections by genre, including "Tales of Gamers and Gaming," "Tales of Humorous Horror," "Tales Out of Time", "Grim, Fair e-Tales," "Tales of an Altered Past Powered by Romance, Horror, and Steam, "Not-So-Heroic Fantasy," and "Shadow Realities." He is a member of the International Thriller Writers, Horror Writers of America, International Association of Media Tie-In Writers, and Origins Game Fair Library. He was also the world's top-ranked player of classic roleplaying games for about fifteen years.
Website * Facebook * Twitter * Bookbub * Amazon * Goodreads