Cover Reveal for Love Against the Odds Boxset by Inger Iversen 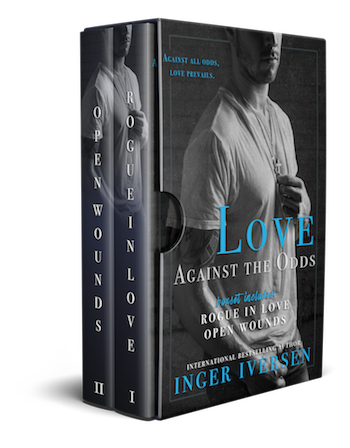 
Against all odds, love prevails.
Love Against the Odds Volume one includes two previously published bestselling novels: Rogue in Love and Open Wounds. This volume features the men of Trent’s Body Shop each story is a standalone with a HEA.
Rogue in Love:
Ten years ago, Lex was forced to skip town, giving up everything he’d ever known. But even his time in solitude couldn’t keep away the memory of the girl he’d left behind. The girl who’d offered him her innocence, and her heart.
Thea had moved on from the boy who abandoned her. Good job, fiancé, comfortable life in New York … until everything is ripped away from her, leaving her to pick up the pieces alone.
When the care of an ailing loved one brings them back to Blackwater, Lex and Thea are confronted by the pains of the past. For Lex, that means helping to heal the broken-hearted woman he left behind. For Thea, it means refusing to let him see the gaping hole his absence created.
The old feelings still linger, but only they can decide to relight the sparks, no matter the secrets and heartaches that come with them.
Open Wounds:
If you could see your life from inception to your death, would you change things or would you let your death play out as fate intended?
Abel is in search of only two things. A stable job and a safe place to lay his head at night after a mistake that cost him eighteen months of his life. As if fate had plans made only for him, Abel is offered a complicated job, and a chance to redeem himself to his old boss, from an old friend. And then he meets her…
And soon, Abel finds himself adding another item to his list—Hope.
At only twenty-six, Hope has only ever slept with one man, and at her boss’s unsolicited advice, Hope plans to forget the abuse and degradation she suffered at her ex’s hand by seducing and bedding the next man she meets. Only, after Hope finds a promise of death at her doorstep, her plans are derailed and only chance at staying alive rests on the dedication of her new bodyguard and her own sheer will to live the life she deserves.
**Includes a bonus copy of Inevitable: Love and War. 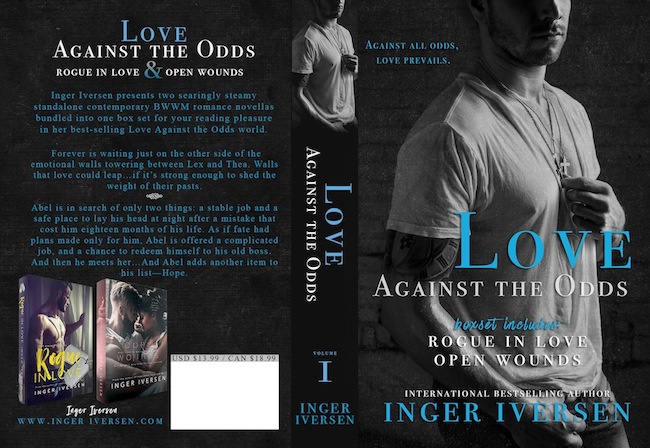 
Inger Iversen is the bestselling author of several novels including her New Adult Series, In the Dark: Running in the Dark, Sinners in the Dark, Confessions in the Dark, and coming soon, Absolution in the Dark. She is also the author of the bestselling Few Are Angels series, a paranormal romance told from the heroine’s perspective that builds in intensity and intrigue to a finale you won’t see coming. Heart pounding action mixed with heartwarming friendships and heartbreaking romance will leave you breathless and begging for more.