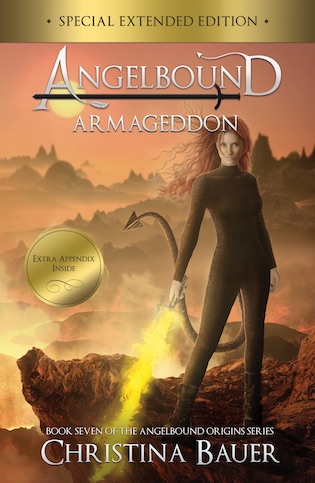 
Now a special edition with an all-new appendix of goodies!
Myla Lewis once fought gladiator-style in Purgatory’s Arena. Now, she’s fighting again, only this time in Hell. And the stakes have never been higher. The King of Hell, Armageddon, has kidnapped Myla and Lincoln’s young son, Maxon.
In the wake of Maxon’s abduction, all the after-realms calling for war, and no one shouts louder than Lincoln. Myla knows that a war against Hell will cost millions of lives, so she devises her own plan, involving a small attack team and a secret entrance to Hell. Will Myla save Maxon, or will her child and all the after-realms fall to Armageddon?
Don’t miss this exciting conclusion to Myla’s adventures in the Angelbound Origins series! The story continues with Angelbound Offspring and Maxon.

Goodreads / Amazon / Barnes & Noble / iBooks / Kobo / Google Play
ARMAGEDDON only $2.99 for a limited time to celebrate the launch of QUASI REDUX (Angelbound Origins #8)!
—
EXCERPT:
I glare down at Connor, my hands balling into angry fists. I so want hurt this man, it isn’t funny. Connor knows why Maxon was kidnapped… only he’s not talking.
“I’ll ask you once again, Father.” Lincoln’s voice drips with menace. “What the hell is going on?”
“Why nothing,” says Connor with a grin.
Over the years, Connor’s ‘jolly old king’ act has gotten really annoying, but never more so than now. We need the truth and fast. At this point, I’d rather he plunge into one of his classic rages rather than smile.
Lincoln takes a half-step closer to his father and glowers down at him. “What do you know about Maxon?”
“I can’t tell you, son.” Connor raises his gaze to meet ours. Bit by bit, his smile fades. “All I can say is this. I’ve been waiting for years to find someone like Hildy. She’s exceptional. A prodigy. She’s exactly what we need. We’ll all be safe now.”
He takes two steps toward the door before Lincoln pins him to the wall, his forearm pressing against Connor’s throat. My own breath catches. Lincoln is almost out of control.
“Out with it.” Lincoln pushes harder onto Connor’s neck. “What do you know?”
Octavia rises to stand beside me, her face pale. I know how she feels. I’ve never seen Lincoln so angry.
Connor gasps for breath. “I ca… I won’t….”
Octavia’s hands flutter by her chin. “My son, what are you doing?”
“You know damn well what I’m doing.” Lincoln re-slams Connor against the wall, only with more force this time around. “You find the strength and tell me, Father. Now.”
“Lin… Lincoln…” Connor’s face turns purple.
“What do you know?” Lincoln’s voice raises to a roar. “Stop being a weak, self-centered worm for once in your life. Find the strength to tell me what’s happening to my son!” Connor’s face turns a deeper shade of purple. His eyes roll back into his head.
“Lincoln, stop it,” I say. “You’re choking him.”
“I’m not choking him.”
Lincoln steps back and Connor crumples to the floor, gasping for breath. The purple hue stays on his face a few seconds too long to be natural.
Unholy Hell. I know what that means. Connor’s under a magical compulsion. Whatever he knows, he can’t speak of it.


Christina Bauer knows how to tell stories about kick-ass women. In her best selling Angelbound series, the heroine is a part-demon girl who loves to fight in Purgatory’s Arena and falls in love with a part-angel prince. This young adult best seller has driven more than 500,000 ebook downloads and 9,000 reviews on Goodreads and retailers. The first three books in the series are now available as audiobooks on Audible and iTunes.
Bauer has also told the story of the Women’s March on Washington by leading PR efforts for the Massachusetts Chapter. Her pre-event press release—the only one sent out on a major wire service—resulted in more than 19,000 global impressions and redistribution by over 350 different media entities including the Associated Press.
Christina graduated from Syracuse University’s Newhouse School with BA’s in English along with Television, Radio, and Film Production. She lives in Newton, MA with her husband, son, and semi-insane golden retriever, Ruby.
Stalk Christina On Social Media – She Loves It!