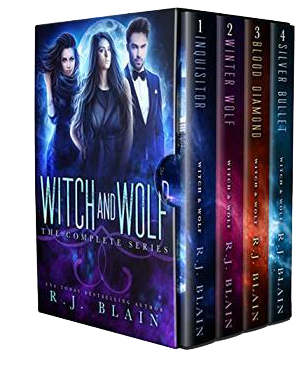 
Life is never easy for those with the strength to change the world.
These are their stories.
Inquisitor
When Allison is asked to play Cinderella-turned-Fianceé at a Halloween ball, the last thing she expected was to be accused of murder. She has to find the killer or she’ll be put to death for the crimes she didn’t commit. To make matters worse, the victims are all werewolves.
On the short list of potential victims, Allison has to act fast, or the killer will have one more body to add to his little black book of corpses.
Winter Wolf
When Nicole dabbled in the occult, she lost it all: Her voice, her family, and her name. Now on the run from the Inquisition, she must prove to herself—and the world—that not all wizards are too dangerous to let live.
Blood Diamond
The world is full of corpses, and Jackson knows them by name. When a group strives to destroy the Inquisition, his powers may be all standing between the supernaturals and extinction.
Silver Bullet
Finished with being a victim, Vicky will do everything in her power to put an end to Basin once and for all, even if it means she must make the ultimate sacrifice and bite a silver bullet for the sake of her family, her friends, and the rest of the supernatural world.
This collection also contains Tales of the Winter Wolf Vol. Six.

Goodreads / Amazon / Barnes & Noble / iBooks / Kobo
—
EXCERPT:
From Inquisitor:
Autumn had come, and I was powerless to stop it—this time. A yellowed leaf clung to its branch, mocking me with its splash of color. The rest of Central Park clung to the hope of summer. I stood on my toes and snatched at it, but a chilly wind ripped it from my reach.
The leaf landed on the path several steps away. When I reached it, I crushed it beneath my boot.
“Wake up on the wrong side of the bed this morning, Allison?”
I twisted my heel while wrinkling my nose. With light brown hair and creamy skin prone to burning rather than tanning, Mark would never be my tall, dark, and handsome, though he was good looking and aggressive with his money. With my sort of luck, he’d never account for anything more than an occasional lunch buddy who needed my help with his finances. Then again, maybe it was better for both of us that way.
Some girls had all the luck. Me? I had more money than I knew what to do with, most of it acquired from Mark in management fees like I was some sort of modern-day vampire. Too bad money couldn’t buy me a life.
“Who said I went to bed last night?” Hopefully, he wouldn’t think too long or hard on my delayed quip.
“What’s got your tail in a bunch?”
I shoved my hands in the back pockets of my jeans and swallowed my relieved sigh. No tail. Good. Last thing I needed was to sprout a tail on Halloween at noon. “N-nothing. You’re always ‘blah, blah, blah, something’s wrong.’ Nothing’s going on.”
Mark arched his brow at me. “So what did that poor little leaf do to you?”
“It failed its calculus test twice.”


RJ Blain suffers from a Moleskine journal obsession, a pen fixation, and a terrible tendency to pun without warning.
In her spare time, she daydreams about being a spy. Her contingency plan involves tying her best of enemies to spinning wheels and quoting James Bond villains until satisfied