Book Blitz & Giveaway for The Crow King by M.H. Woodscourt 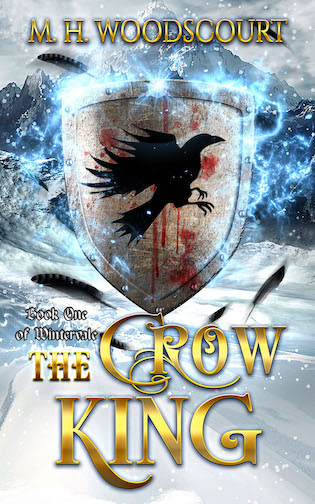 
Magic is against the law. He must use it anyway.
The Crow King has outlawed magic. Despite the kingdom’s edict, Gwyn plunges into the ancient and deadly True Wood to find a magical cure for his dying brother. Within the shadowed realm, he must fend off more than violent and fallen fae-like Ilidreth when he learns the king is out to stop him at whatever cost.
On his desperate quest, he is joined by a unicorn, a quirky girl, and the maddest of the fallen fae. Together they must outrun enchanted crows and enemy armies, and face the ghosts of a shattered age, all while racing to save Gwyn’s brother. Meanwhile, war brews between countries, and a secret order of mages hunts Gwyn down.
Yet none of this can prepare Gwyn for the harrowing truth behind the fall of the Ilidreth long, long ago, and what it means for his life and his homeland.

Goodreads / Amazon / Barnes & Noble
—
EXCERPT:
Mist curled over the quiet hills of Vinwen. Somewhere a bird trilled, prophesying the coming dawn, and the sun answered with a ring of gold spilling over the horizon as it peeked at the slumbering world. Lazy clouds drifted by, grey, dappled with faint pinks and yellows.
Sitting on the wooden fence, Gwynter ren Terare squinted against the hovering gloom in the valley below, eyes fixed on the road. He strained for any sound beyond the faint chirrup of crickets, the song of birds, the gush of the nearby stream. A crow cawed as it landed on the fence.
There. Just there. A faint neigh. The rattle of a wheel against a stray stone. A cracking whip. Gwyn shoved against the rough wood post, leapt to his feet atop the fence, and wobbled once before he caught his balance. Perched, he soon made out the distant shape of the coming carriage, a single lantern bobbing to pierce the predawn shadows.
Gwyn grinned and jumped from the fence. The crow screamed and flew off. Gwyn loped along the streambank up toward the manor house. His shoulder-length hair flounced in his eyes, but he ignored it as he cut through a protesting gaggle of geese and threw himself against the kitchen door to stumble inside.
“Mercy, child!” cried Mavell, spoon in hand. “You look a sight. What awful trouble could there be so early as this?”
Gwyn shook his head as he gasped for air, leaning forward, hands on his legs. He gulped a few times before he could utter a word. “Lawen’s coming. Almost here. Down the road a bit.” He straightened and headed for a bucket of water on the table, took up a ladle, and helped himself to a long, cool drink.
The cook grabbed the ladle, poured water into a cup, and handed that to Gwyn. “Master Lawen, already? Surely not. He’s not to come until tomorrow, so his letter said.”
Gwyn drained the cup. He held it out to let Mavell ladle him another. “But he’s always early. I had a feeling to watch for him, and here he comes.”
“And how do you know it’s Master Lawen?”
Gwyn smiled. “I always know.”
She pursed her lips but didn’t argue. There seemed no point, they both knew that.
“Well,” the slender woman said, rubbing her hands against her apron. “If it is Master Lawen, oughtn’t you go off and clean yourself up for his arrival? Your mother will have a fit if you greet him looking like a shepherd’s boy.” She swatted Gwyn’s backside with the ladle. “Off with you, go on.”
Gwyn chuckled and trotted out of the kitchen and into a long gallery. His feet echoed against the flagstones. He cast a glance out the windows to find that full dawn had banished grey in favor of a thousand shades of green and brilliant gold. He could hear the geese and chickens griping and dogs barking as the carriage rolled along the private drive leading to the house. Gwyn thought he heard the crunch of gravel and his heart leapt.
Lawen! Home, at last. How long had it been? A year or longer. Mount Vinwen had felt hollow in his absence, though none of the others appeared to notice.
Gwyn reached his room, brushed off his trousers to dislodge any dirt or wood splinters, and changed his coarse shirt for fine woven linen. He slipped on stockings, yanked on a pair of polished boots, then caught his hair in a ponytail. A last inspection in his mirror. Gwyn awarded himself a curt, militaristic nod. He tugged one last time on his long shirt front, wrapped his belt atop it, clicked his heels, and headed downstairs.
In the main vestibule he found the rest of the ren Terares assembled, even Mother, though her lips pressed tight and her eyebrows arched above eyes sharp as needles. She turned toward Gwyn as he reached the bottom of the sweeping staircase and her gaze softened.
“Gwyn, dearheart. Thank you for not looking like a peasant this morning.”
He kissed her cheeks. “Good morning, Mother. I thought this occasion warranted the change.”
She sighed. “Yes, I suppose the master is home today.”
Gwyn brushed off her tone, not willing to let it seep in. He could understand her resentment in a way. Last year Tynveer ren Terare, Gwyn and Lawen’s blood father, had been killed in a skirmish against the savage Ilidreth. Now Lawen was the master of Mount Vinwen, and Mother, Tynveer’s second wife after Lawen’s mother had passed, now suspected her stepson would soon send her and her three children to live at another of his estates, but Gwyn knew better. There was no kinder soul in all Simaerin than his elder half-brother.
The sound of crunching gravel outside the front doors ceased as the carriage bounced to a stop. Gwyn’s younger sisters laughed and tumbled forward as the servants pulled the manor doors aside to admit the Master of Vinwen. 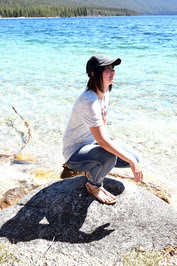 
Writer of fantasy, magic weaver, dragon rider! Having spent the past 20 years devotedly writing fantasy, it's safe to say M. H. Woodscourt is now more fae than human.
Her published titles include The Crow King, book one of her YA/High Fantasy Wintervale series, A Liar in Paradise and Key of Paradise of her YA/Portal Fantasy Paradise series, as well as October Cove, an Urban Fantasy novella.
All of her fantasy worlds connect with each other in a broad Universe, forged with love, sadism, and no small measure of blood, sweat, and tears. When she's not writing, she's napping or reading a book with a mug of hot cocoa close at hand.