Book Blitz & Giveaway for Revenge in the Capitol by B. Ivy Woods 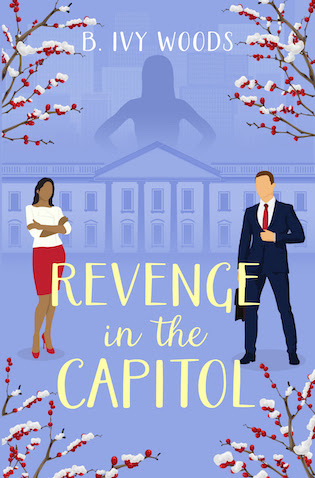 
The past is gone but not forgotten.
Months after Rae and Flint thwart a stalker’s attempt to destroy their relationship, they are focusing on themselves. Their relationship is better than ever and Flint’s political campaign is taking off. But as his campaign heats up, his schedule only gets busier. Rae can’t help feeling like she’s been left out in the cold.
Things go from bad to worse when their past comes back to haunt them. A forgotten foe is bent on revenge and will do everything in their power to get it, including ruin Rae and Flint’s relationship for good.
Revenge is a dish best served cold, but will Rae and Flint stop them before it’s too late?
This is book two In The Capitol series.

Goodreads / Amazon
—
EXCERPT:
Rae glanced toward the stage, and all thoughts of Rob left her mind. Flint appeared in her line of sight, and her smile was bursting at the seams. He was walking toward them with Rick, who had rushed off to meet him backstage once the event concluded. It took everything in her to not run over to him and give him a hug.
Rae saw Gladys shift slightly out of the corner of her eye, and when she turned to look at her, she caught Gladys looking at her son. Gladys’s gaze didn’t waver, and when Flint finally looked up, she saw him look at her, then his mom, then back at her. There, his stare remained until he reached the two most important women in his life.
“Rick, thanks for everything tonight. I think the campaign is definitely moving in the right direction.” Flint took his eyes off of Rae briefly to look at Rick as he spoke.
“Perfect. I’ll send you an email this evening about our next steps, and then we’ll chat in the morning.” Rick said goodbye to the group before he headed out.
“Mom, thanks for coming,” Flint said as he shifted his attention to his mother. Although he wasn’t looking at her, Rae’s body was aware of Flint’s presence. More than she would care to admit.
“Wouldn’t miss it for the world, sweetie. You did an outstanding job.” She leaned in to give him a hug and a kiss on the cheek.
“Excellent job up there, West.” Another voice interrupted their moment. The trio turned their attention to the intruder. Before them stood Rob Cohen, who eagerly shook both Gladys’s and Rae’s hands. He swept a hand through his blond hair and gave the group an almost blinding smile. Although Rae had just met him, she could see that the smile didn’t reach his eyes. Not by a long shot. 
B. Ivy Woods has been writing for as long as she can remember. After getting her Bachelor of Arts in Political Science and Environmental Policy and a Master's in Energy Policy and Law and working in the environmental field for several years, she decided to become a stay-at-home mom. That is when thoughts of a writing career really took off. Although she competed in NaNoWriMo multiple times, 2019 was the first year that she won. This win inspired her to make writing a career. Her debut novel will be self-published in 2020.
Although she is originally from New York City, she currently lives in the DMV (Washington, D.C., Maryland, Virginia) with her husband, daughter, dog, and cat.