About No Gravestone Unturned 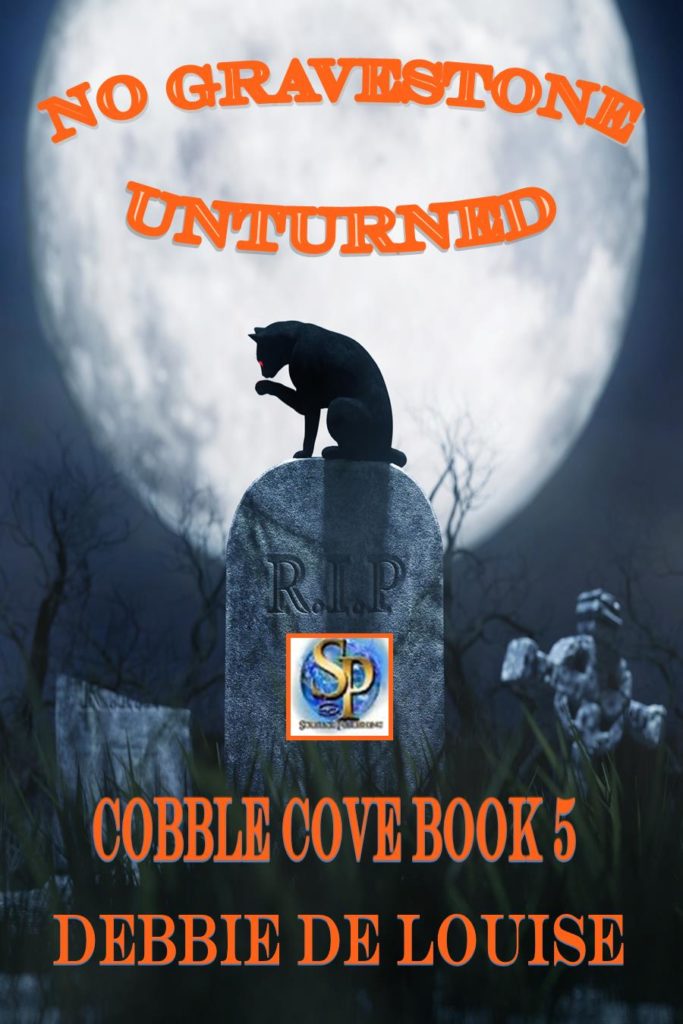 It’s October in Cobble Cove, and Alicia is busy preparing for the library’s Halloween party when she learns that John’s aunt from Florida has died and that John’s cousins and their spouses are coming to town to bury their mother. The day after the funeral, the caretaker’s son is found dead by John’s grandfather’s gravestone, from a blow on the head. The only witness seems to be Sneaky the library cat, who, having left the library, turned up at Alicia’s door with blood and dirt on him.

As Alicia, Gilly, and Sheriff Ramsay investigate, a generation of family secrets is uncovered. Are one of the guests staying at the inn a killer? Will the humans solve the crime, and can Sneaky, Kittykai, and Salem, the inn’s guest cat, team up to help?

REVIEW
*I received a free copy of this book which I voluntarily chose to write an honest review for.
Kitties anyone? If that intrigues you then this cozy will be right up your alley. We follow Alicia, the library director, and her cat Sneaky as this story takes place. Het husband had a death in the family that brings family members from all over that he hasn't seen in years. This makes for bonding, surprises, and interesting moments as they all get together. This is also where the cats come in. We have Sneaky of course but he is joined by a cat from the inn the family stays at as well as one brought by one of the family. They don't get along at first but over time that changes. Then a death is discovered at the cemetery that ties to the family causing Alicia as well as Sneaky to start investigating. They uncover quite a few hidden surprises that lead to a surprising ending. This all ties together into an enjoyable cozy that is sure to delight fans of genre as well as cat lovers. Provides a mix of viewpoints from both the humans and the pets that combines into a delightful mix. I really liked it so I give it 4/5 stars.

Debbie De Louise is an award-winning author and a reference librarian at a public library on Long Island. She is a member of Sisters-in-Crime, International Thriller Writers, the Long Island Authors Group, and the Cat Writers’ Association. She has a BA in English and an MLS in Library Science from Long Island University. Her novels include the four books of the Cobble Cove cozy mystery series: A Stone’s Throw, Between a Rock and a Hard Place, Written in Stone, and Love on the Rocks. Debbie has also written a romantic comedy novella, When Jack Trumps Ace, a paranormal romance, Cloudy Rainbow, and the standalone mysteries Reason to Die and Sea Scope. Her latest book, Memory Makers, is a medical thriller. She lives on Long Island with her husband, Anthony; daughter, Holly; and three cats, Stripey, Harry, and Hermione.