Yo, Max here. I am a black Labrador retriever. I’m not a magic dog or a talking dog or even a familiar—whatever that is. I had been living on the streets of Pine Grove, getting generous handouts from the citizens—most of them anyway. Some were a less generous with the snack and more generous with the disapprovals. Mattie was a kind soul from the very beginning, so I started hanging out close to her house. She’d sneak me leftovers which were so yummy. Regardless of what she says, she’s a great cook. Her meatloaf is to die for, and she only buys the all-beef hotdogs. The dog part put me off at first, but I was hungry, and they did taste good, so I don’t really think it was dog. I said sneak because Mo wasn’t keen on her feeding me. If he saw me hanging out, he’d shoo me off. He was a lawman, and I was sort of a fugitive, I guess. He never called animal control to come get me, so that counts for something. He was a softy too. Maybe he just didn’t want to share all that good food with me. He has a fondness for hotdogs covered in chili. Mattie won’t feed me chili. She says it will give me gas—whatever that is.

My previous home was horrible. I’d rather live on the street taking handouts. It was cold and lonely on the street, but anything was better than where I came from. Late one night when my owner left me out in the yard after he’d gone to bed, I dug a hole under the fence. Took me forever, but I finally made it. Didn’t even look back. I ran and ran and ran. Lucky for me, the guy hadn’t put a chip in me, because when Mattie and her friend Lizbeth found me, Lizbeth hauled me off to the vet. The things that guy did to me. Whew! I was so worried the vet would find my owner, that I waited until the assistant girl left the back door open, and off I ran. Made a clean break from the place and ran.

I won’t tell you how I finally won Mo over, you’ll have to head the prequel, Hark! A Homicide to find that out. And if you want to read about my first trip in the RV—it was harrowing—read Flea Market Felony. 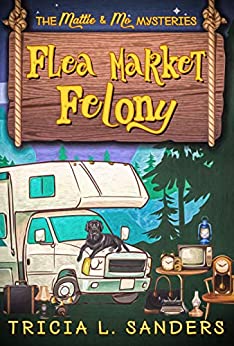 These new retirees have just hit the road. Will their first campsite’s shenanigans land them both in handcuffs?

Mattie Modesky’s been hankering to start retirement right. Even if it’s in an RV. The sassy senior believes there’s no time like the present after her policeman husband hangs up his badge and they hit the road.

When they reach their first RV park, the yoga instructor hitting on Mattie’s man turns her peaceful vacation sour. In an effort to stand her ground and confront the sneaky resident, Mattie finds a new friend, a stiff corpse, and her husband as the prime suspect.

She is shocked to her core when her man’s newly purchased pocketknife is the murder weapon. But when the real killer makes the fatal mistake of dognapping her beloved pooch, the silver-haired sleuth sets her sights on solving the crime herself and proving her lawman’s innocence.

Can Mattie clear her hubby’s name and reclaim their pup before the villain turns their golden years into iron bars? Or will the killer roll away in a motor home with Mattie’s dog in the passenger seat?

Flea Market Felony is the adventure-packed first book in The Mattie and Mo Mysteries series. If you like irresistible characters, fun surprises, and captivating whodunits, then you’ll love Tricia L. Sanders’s clever read.

REVIEW
*I received a free copy of this book which I voluntarily chose to write an honest review for.
Mattie and Mo are ready to enjoy retirement. They have purchased an RV planning on traveling now that they have the time. They go on a week long excursion to test the waters to an RV park that also has a close flea market. No is looking forward to fishing after being a cop for years. Mattie on the other hand is a little leary not sure what she will do. Day one starts with a bang thanks to the loud boisterous Cal who flirts with everyone. Mattie fights with het making it necessary to apologize. She didn't expect to find her dead though. What follows is a two fold investigation as Mo is asked to help the cops with a case while Mattie looks into things she thought were unrelated with a new friend helping. Things get intriguing when the two investigations entwined with one another. Creates a fascinating story as it all plays out keeping you attention wondering what crazy thing will happen next. I must say Max the dog is my favorite. A great cozy especially for fans looking for older protagonist. I really liked it so I give it 4/5 stars. 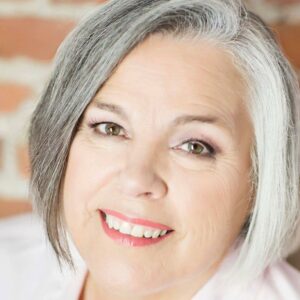 Tricia L. Sanders lives in the Austin, Texas area and writes about women with class, sass, and a touch of kickass. A former instructional designer and corporate trainer, she traded in curriculum writing for novel writing, because she hates bullet points and loves to make stuff up. And fiction is more fun than training guides and lesson plans.

When she isn't writing, Tricia is busy crossing dreams off her bucket list. With all 50 states checked, she's concentrating on foreign interests. She's an avid St. Louis Cardinals fan, so don't get between her and the television when a game is on. Currently, she is working on a mystery series set in the fictional town of Wickford, Missouri. Another project in the works is a women's fiction road trip adventure.

Her essays have appeared in Sasee, ByLine, The Cuivre River Anthology, and Great American Outhouse Stories; The Whole Truth and Nothing Butt. She is a proud member of The Lit Ladies, six women writing their truths into fiction.