Book Blitz & Giveaway for The Poison of Woedenwoud by K. Ferrin 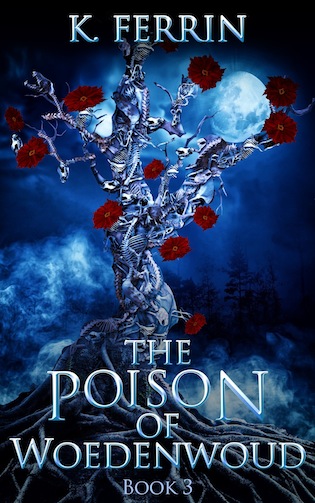 
Magic is draining from the world threatening everything, the tatters of her own family, the warlocks, and the Mari alike. Ling and her companions search desperately for the key to ending it all, but warlocks dog their every step. Meanwhile, Ling, isolated and afraid, struggles against a rising tide of darkness far more threatening than anything in the Darkling Sea.

EXCERPT:
Ling slammed the book closed and tossed it to the bed next to her before moving across the room and staring down at the woman lying there. Ling could remember nothing of her, of what they’d been through together, of ever having met her. But there were pages and pages of writing in the grimoire detailing all of it. There was more of Fern in those pages than anyone else. They had become allies and friends as they’d made their way through the vagaries of this never-ending war. Ling marveled at that even now. She’d been so certain she’d never have such a relationship again, but the abuse she’d experienced because of what she was had stopped at the borders of Brielle. Even Fariss didn’t hate her for what she was, though his desire to destroy her was no less.
Ling ran a finger lightly along Fern’s blue-scaled cheek. Warm, dry, a hint of roughness beneath her finger. She needed to talk to someone about what she’d read, what she’d been through, the hate and anger she was feeling. She wished fiercely that Rudy were here with her. Or, more accurately, that he had stuck by her side as she would have done for him. But he’d said nothing and done nothing as Laera had tried to kill her. His face had been twisted with anguish, but what good did that do her? He’d done nothing, lifted not even a finger to help her. She wanted to punish him too.
Perhaps Fern was the only friend she had anymore, but she didn’t feel like a friend. Ling dropped to her knees and rested her head beside Fern’s ravaged shoulder. She tried to dredge up something, some memory of their time together, some feeling for the woman lying on the bed in front of her, but there was nothing.
Of the others, she barely knew Dreskin, and even if that hadn’t been true, he’d brought Celene aboard this ship. Celene, the mother of the man who’d raped her. Her daughter Amalya too, a girl who was physically close to Ling’s own age, but mentally still a child.
Dreskin had been there; he had yanked Fraser off her and had dragged him up to see the captain. He knew what sort of man Fraser was, and had brought that woman aboard anyway. He was no friend of hers.
Captain Drake had helped her, and continued to help her, but she’d also allowed Ling to walk out into Marique with Fariss. Drake had known what Fariss was capable of, but had said nothing to stop Ling from leaving with him. Ally she might be, but she was hardly reliable.
And not one of them understood what it was like to be cut so perfectly adrift from everything you knew and from everything you were. Only Fern knew what it was like to be so different, so hated for that difference, and so completely alone. Ling was the only changeling in the world who thought and felt and looked so completely human. Fern was one of the last two Mari in the world, and may actually be the last if Alyssum had succumbed to her injuries. She and Fern were the only ones in all the world that completely alone.
Ling reached out and wrapped her fingers around Fern’s hand. She didn’t remember anything about this woman, but she did feel a kinship with her nevertheless. An odd sort of one, based entirely on words she didn’t remember writing in a book she never remembered seeing before, but it was there. 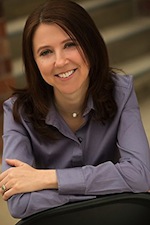 
K. Ferrin spends her days surrounded by engineers, technology, and humming machinery, but her evenings are steeped in magic, myth, and adventure. She writes fantasy, loves gardening, and eats way too much pie. She lives at the foot of the Colorado Rockies with her husband and two pooches.
Her novels include the stand alone YA fantasy novel Magicless, as well as Across the Darkling Sea, and A Dying Land, the first two books of a series. You can find her online at www.kferrin.com.