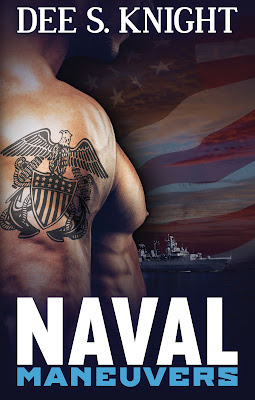 Long Blurb:
Men and women of the armed forces experience desire and love pretty much like everyone else. Except, well, there is that uniform. And the hard-to-resist attraction of "duty, honor, service" as a man might apply them to a woman's pleasure. All things considered, romance among the military is a pretty sexy, compelling force for which you'd better be armed, whether weighing anchor and moving forward into desire, dropping anchor and staying put for passion, or setting a course for renewed love with anchor home.

Individual blurbs: (the book is in three parts)
Weighing Anchor (allowing a ship to move forward by retrieving the anchor): A professional woman sworn to avoiding all things military finds herself in love with a lieutenant commander in the Navy. Love won't conquer all if she allows her childhood memories to eclipse future happiness.
Dropping Anchor (securing movement by dropping the anchor): Two people find (surprisingly) that they are both in the Navy and love their chosen professions—until one turns out to be an officer but not a gentleman and the other is a gentleman but not an officer.
Anchor Home (safe, smooth sailing): When two former lovers find each other after more than a decade, will a long-hidden secret threaten the course of a rekindled romance or be the cause of it?

Author Bio:
A few years ago, Dee S. Knight began writing, making getting up in the morning fun. During the day, her characters killed people, fell in love, became drunk with power, or sober with responsibility. And they had sex, lots of sex. Writing was so much fun Dee decided to keep at it. That's how she spends her days. Her nights? Well, she's lucky that her dream man, childhood sweetheart, and long-time hubby are all the same guy, and nights are their secret. Dee loves writing erotic romance and sharing her stories with you. She hopes you enjoy!
Website: https://nomadauthors.com/deesknight/index.html
Twitter: https://twitter.com/#DeeSKnight
Facebook: https://www.facebook.com/DeeSKnight/