Book Blitz & Giveaway for Jaws of the Wolf by Charlotte Jardine 
He’s her father’s slave. She’s promised to another. But war changes everything.
Tervingi Territory, 376 AD. Gelvira dreams of becoming a powerful jeweler. But the arrogant son of a tribal elder wants her for a wife instead. After a Hun raid sends her people into exile, her chance to master the ancient secrets of her craft are stripped away…
Adafuns yearns to become a great warrior and win Gelvira’s affection. But as a slave in her father’s service, he has little chance of either. Captured and carried off by the Huns, Adafuns’ dream of being a warrior could come true… at the cost of losing Gelvira forever.
With her people starving, marrying the tribal elder’s spoiled son may be Gelvira’s only hope to save her family. Will Adafuns reunite with the exiles in time to free Gelvira from her loathsome vows?
Jaws of the Wolf is the exciting first novel in the epic Visigoth Chronicles series of YA adventures. If you like strong heroines, thrilling action, and rich historical detail, you’ll love Charlotte Jardine’s page-turning saga.

Goodreads / Amazon
—
EXCERPT:
After the meeting broke up, Gelvira sat by the fire, mulling over everything she’d heard. The wood creaked as someone sat beside her. Their reiks’ son, Widin. She scowled. She wasn’t in the mood to talk to him. Not after the way he’d treated Pa.
“It must be a lot to take in,” Widin said. “Most of the men will be riding to war. Sorry, not to war. To rebuild old Roman fortifications.” His face darkened and he compressed his lips.
“Did you come to Erdeu to round up warriors in Lord Angmar’s name?” Gelvira asked.
He smiled. “Also to see you.”
She glanced around. Praise the Great Mother, Ma hadn’t heard. She’d be planning their wedding feast.
Widin motioned toward her amulet. “This is new. Did you make it?”
She nodded. “After the raid. I worked on it in the evenings, to take my mind off the Huns.” There was no way she’d tell him its purpose.
He traced the outline of the wolf. “I would have thought flowers or birds more appropriate for a maiden?”
A shiver ran through her. A wrongness. Then heat flared from the metal.
Widin snatched his hand back. “It … burnt me. Was it made using the Becoming One?”
“Yes,” she replied, head spinning with excitement. Had her amulet really done that?
He scowled. “Our people are under attack. You shouldn’t be wasting your time making baubles.”
“It’s a practice piece,” she replied, biting down on her anger. “Master Raginmar used it to teach me the rudiments of the Becoming One.”
“Ah, I see.” Widin’s black look faded. “You must make me something useful, once you’ve mastered the art. I’ll need the gods’ aid far more than you, safe behind your palisade.” He wound his fingers through hers and pulled them against his chest.
Ma noticed the gesture, and beamed.
“If it wasn’t for the Huns, I’d marry you before summer’s end,” he said, leaning close so his breath brushed her skin. “My father would prefer I took a wife who brings more political advantage. He doesn’t see it, but you’ve much in your favour: you’re well born, brave, and quite lovely to look at. And your jewellery will bring me renown, now you’re learning the Becoming One.”
“You honour me,” Gelvira replied, lowering her eyes so he couldn’t see her dismay. Marry him after the way he’d behaved? She couldn’t bear the thought. “As you said, you’re a warrior. You must deal with the raiders first. At times like these, marriage must wait.”
For one terrible moment, she felt almost grateful to the Huns. 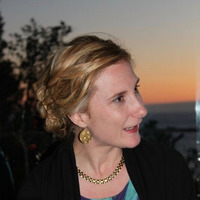 
Charlotte Jardine writes Historical Fiction, Contemporary Romance and Romantic Adventure. Her books feature courageous heroines, big-hearted heroes, adventure and love.
Her love of history came from reading the adventures of Asterix and Tintin at a young age and continued into adult life, when she studied Classics and Roman History to postgraduate level at university.
While working as a desk slave by day, she spends her evenings escaping into other worlds via her writing.