What if you woke up from your worst nightmare, only to find the world watching it? On repeat . With relish.
What if those viewers found you? Cornered you until you performed the nightmare live?
Would you run? Fight?
Or charge admittance?
This is Sawyer’s reality. She’s a survivor—gritty and determined—but the struggle to put it all behind her is something that’s with her every second of every day. Her abuser is in jail now, but he’ll never truly let her go. When she tries to shelter in something good, the darkness inevitably follows. The effects of the abuse flow through her life like ripples of pain in this raw, at times darkly comedic, coming-of-age saga that explores what it means to survive the unthinkable—and find the courage to rise up and keep fighting.
Sure to satisfy fans of SILVER LININGS PLAYBOOK and 13 REASONS WHY, Never Touched is a New Adult contemporary drama by breakout author Laney Wylde. Richly written with complex characters and a compelling storyline, it’s perfect for fans of Colleen Hoover’s HOPELESS, Rebecca Donovan’s REASON TO BREATHE, and Jessica Sorensen’s THE COINCIDENCE OF CALLIE & KAYDEN.
Please Note: Story contains graphic sexual content, including mentions of abuse. Strong language throughout. 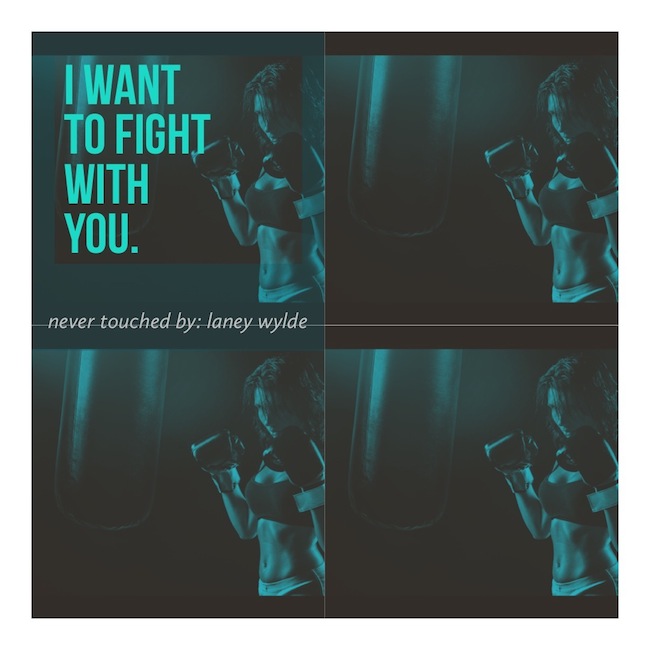 —
Are you a book reviewer?
Request a review copy here!
—
EXCERPT:
He shook his head. “You’re an idiot.”
I pushed his arm off my thighs. “You’re an ass.”
“Yep,” he said with a nod. I pressed my lips together to keep from smiling at the pride he found in his flawed personality. Wrapping his arms around his bent knees, he stared at me, like he was gathering information for his next move. I held my ground—no smiling—though barely. After a long minute, he finally said, “You’re cold.”
I glanced down at my hands, which were a pale shade of violet and reflexively quivering against each other to get warm. My body flinched when Jake took them between his, pressing them together and then making a hollow between his palms. He brought our hands to his lips and exhaled softly into the space between his thumbs, creating a small cave of warmth for my fingers. I swallowed past my suddenly dry throat at the cozy shivers racing up my arms.
Jake’s dark eyes raised to mine, making me suddenly aware of the terror that was probably plain on my face. Parted lips, wide eyes, and my breath that had halted some time ago. Why was he touching me? What did he want from me?
Why did I feel good when he touched me?
It wasn’t supposed to feel good, right? I shouldn’t like the feel of his skin on mine. Men only touched to hurt. I shouldn’t want that.
But when he said, “You might be warmer if we sat together,” I nodded and stood, moving so he could take my chair, so I could curl up in his lap.
Huddling my arms against my chest, I rested my head on his shoulder. My eyes shut cautiously so I could take in the scent of his skin. He wrapped his coat over my back before relaxing his cheek into my hair. I kept my eyes closed, half from fear, half from the desperate need to feel what it was like to just be held.
I had felt nothing like it before. 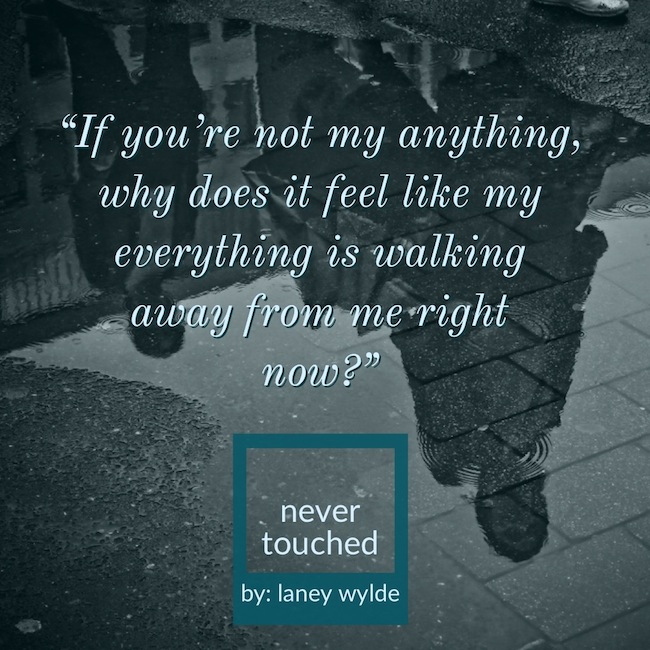 
Laney Wylde is enamored with all things southern California--the traffic, smog, surprise earthquakes, and nonindigenous palm trees. Consequently, it's the landscape her strong and sometimes lovable female leads paint their stories on. Her New Adult novels Never Touched and the After Twelve series are bright with provocative themes, steamy romance, and inappropriately timed humor.
When Laney isn't writing, she's singing Taylor Swift with her little boy or asking her husband not to tell her about his work as a surgical resident while she's eating. She daydreams about using her math degree to get into law school, then realizes that would be too much work and that she should just play pretend court on paper instead. While she loves a good book, nothing beats 30 Rock with a bag of popcorn and M&Ms.