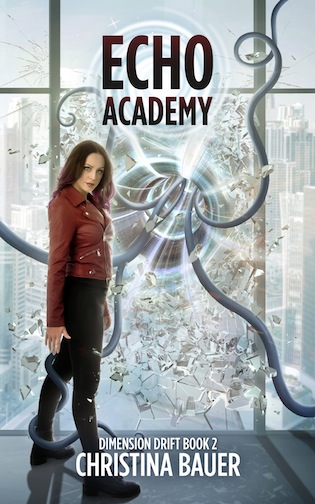 The second book in the new series from USA Today’s ‘must read YA paranormal romance’ author, Christina Bauer
Our heroine Meimi Archer has been assigned to attend ECHO Academy. There, the evil Headmaster believes that Meimi will help the government conquer other dimensions.
But Meimi has some very different ideas. She’s starting a revolution.
That is, if the Headmaster doesn’t find out and murder her first.
This new series is perfect for: fans of urban fantasy, action & adventure, cool science, evil corporations, forbidden romance and hot new classmates who may or may not be aliens.


Christina Bauer knows how to tell stories about kick-ass women. In her best selling Angelbound series, the heroine is a part-demon girl who loves to fight in Purgatory’s Arena and falls in love with a part-angel prince. This young adult best seller has driven more than 500,000 ebook downloads and 9,000 reviews on Goodreads and retailers. The first three books in the series are now available as audiobooks on Audible and iTunes.
Bauer has also told the story of the Women’s March on Washington by leading PR efforts for the Massachusetts Chapter. Her pre-event press release—the only one sent out on a major wire service—resulted in more than 19,000 global impressions and redistribution by over 350 different media entities including the Associated Press.
Christina graduated from Syracuse University’s Newhouse School with BA’s in English along with Television, Radio, and Film Production. She lives in Newton, MA with her husband, son, and semi-insane golden retriever, Ruby.
Stalk Christina On Social Media – She Loves It!