Songwriting partners Lawson Harper and Jessa Warlow’s musical ambitions are derailed when their so-called relationship ends disastrously. However, neither Lawson nor Jessa are willing to give up on the album’s worth of soul-searing songs they wrote together—songs they’re sure are good enough to change both their lives.
Will the chemistry that fuels their creativity drive them to make the record of a lifetime, or only to absolute madness?

—
EXCERPT:
I opened up the program Tim favored and selected a file I had created in the days since our meeting at Musso. A slamming four-on-the-floor beat filled the room. It was a simple starter beat I’d created for the first song Jessa and I had written together, from scratch.
Jessa turned to me, chin cocked, guitar at the ready. “What do I do?”
“Play Estrella. Jump in whenever you’re comfortable.”
Jesse took a deep breath and began to strum. In no time, she was locked into the beat. Clearly, she hadn’t abandoned our songs the way I had. She wasn’t rusty in the least.
When Jessa added her vocals, I shivered. I’d forgotten how full and warm her voice was. How it rattled with just a touch of gravel on the high notes. I had also forgotten just how good our songs were. All through the cold Gunther winter, Jessa and I had altered them and played them back over and over, making sure the flow was just right. The arc. The mood.
While Jessa strummed and sang, I made adjustments to the beat. I switched up the bass tone so it was even more thudding and added a ghostly echo to the snare. At first, I wasn’t sure how to approach the toms, but I ended up dialing them back by removing a few hits from the loop.
By the time Jessa hit the bridge, I was just listening. Layered over the beat, her voice took on a haunting quality. The result really was just as I’d imagined. A strange, but synergistic juxtaposition.
After Jessa’s last note, I hit the spacebar and halted the beat.
In the sudden silence, Jessa’s eyes widened. “Lawson. I can hardly believe it. That was our song. But it was so much more.” She shook her head.
“Should we try out a few more options? You know, keep searching for our sound?”
“Searching for our sound? Lawson, we just found it . . .” 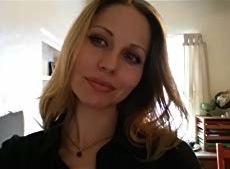 
Tabitha Rhys is a writer and mom with a passion for music, misfits, and subculture. She grew up in the Philadelphia suburbs and now resides in Riverside, CA with her husband and son.