Book Blitz & GIveaway for Kingdom of Glass and Ashes: A Limited Edition Collection of Cinderella Retellings 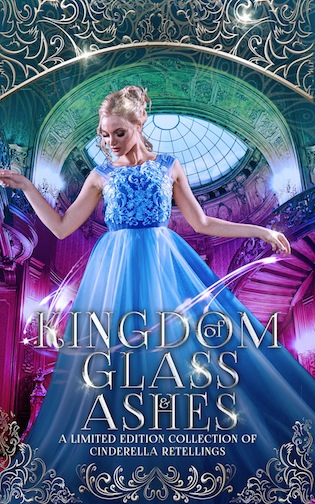 
A classic fairy tale- but not how you remember it…
What if the stepmother wasn’t the only one who was wicked and Prince Charming wasn’t what he seemed? What if your favourite princess didn’t make it home by midnight?
Be transported to far away lands where fantasy and magic come together and pumpkins and princes are joined by shifters and stepsisters in this captivating collection of one of the greatest love stories ever told.
From the imagination of our authors, prepare to meet Cinderella as you’ve never read before. Kingdom of Glass and Ashes is a spellbinding collection of retellings, written by multiple USA Today and bestselling authors telling their own version of the beloved tale.
Get ready for romance, excitement, enchantment and more than just a glass slipper.

Goodreads / Amazon / Barnes & Noble / iBooks / Kobo
—
SNEAK PEEKS:
Excerpt from Holly Hook:
I’m Ellia, Syndie’s ugly stepsister. Mother knows this, so she works Syndie to the bone, but this whole time, she’s been waiting. Planning. Syndie wants us on the streets, and despite my kindness, I’m no exception.
Following her to the Courts lands me in the hands of a handsome guard, Jasper. Literally. And he doesn’t seem to notice my corset or frizzy hair. Nervous and secretive, Jasper wants to stop cruel Prince Calvin from becoming King, which he’ll do when he chooses his wife at the royal ball. And now I’m key to a plan that can save my family and the entire Kingdom.
Our weapons? Two magical slippers. One gives false beauty–but only until midnight. Then the other shows the wearer’s true nature. If Prince Calvin even holds the hand of his chosen when the clock strikes twelve, the spell hits him, too. Everyone will see the truth and he’ll never become King.
He and Syndie deserve each other.
I must make her dreams come true. But Mother, my sister, and a kingdom of jealous girls will do anything to stop Syndie from snagging the Prince. But what terrifies me the most is that trapped slipper. I can’t let Jasper see how ugly I am, but if it all goes wrong, I’ll have to give myself to its magic.
The Kingdom must be saved at all costs, even if I must sacrifice my happily ever after.

—
Blurb from Emma Savant:
Hidden in the city of Portland, Oregon, is a shimmering world of magic—one faerie Olivia Feye doesn’t want to touch with a ten-foot wand. She’d rather study biology, or garden, or floss her teeth, or do literally anything except pay attention to the Glimmering world and her internship at Portland’s premier faerie godparent agency.
But when her supervisor is hospitalized after a flying pumpkin carriage accident, Olivia is thrust into the middle of a case. And this one won’t be easy: Her client is Elle, a barista whose plans don’t include an enchanted prom or Prince Charming.
The reward for a happily-ever-after is enough gold pieces to get Olivia out of the Glimmering world forever. But as she comes face-to-face with the complexities of faerie godmothering, she’s forced to wonder: How much is she willing to sacrifice for her own happy ending?

—
Blurb from D.L Pitchford:
A modern day Cinderella with a twist…
High school seniors Noah Barton and Eden Prince have competed for top of their class since age seven. When their academic rivalry ruins a thermodynamics demo, their physics teacher decides to help them get along. By forcing them to be lab partners.
As graduation approaches, Noah and Eden are too busy figuring out college to deal with each other. Noah’s football-loving dad sabotages his chance to win a big scholarship. Eden’s traditional mother cares more about finding her a husband than encouraging her dreams.
Winning big at the regional science fair is their last hope.
Will Noah follow in his mother’s footsteps? Can Eden show her parents the environment is more important than a boyfriend? Will Noah and Eden finally learn to work together?
Follow Noah and Eden’s budding romance in this emotionally charged, gender-swapped retelling of Cinderella.
Blurb from Cate Dean:
Sometimes, you have to create your own happily ever after…
Elle Summers spends her days taking care of her stepmother and stepsisters, but she is secretly working on her escape. With the help of her best friend, she plans to act her way to freedom.
When she auditions for a local production, her life is turned upside down by entrepreneur and producer Henry Winters. He needs a new leading lady for his Broadway production, and he wants her. He sweeps her off her feet and to the Great White Way, where she finally has her chance to shine.
But in the whirlwind of her new life, she forgets one thing – her stepmother and stepsisters.
While she starts to live the life she’s always dreamed about, they are plotting a way to bring her home. And if their plan works, Elle will fail – in a way that not even a fairy godmother can fix.