Freebie Blitz for Shopping for an Heir by Julia Kent 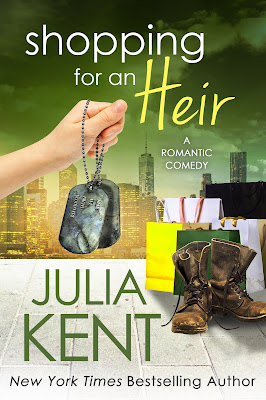 FREE BOOK BLITZ
FREE for a limited time - SHOPPING FOR AN HEIR. A hilarious standalone in Julia Kent's bestselling Shopping for a Billionaire series. Gerald Wright works for billionaires. He never imagined he’d become one. Get the Whispersync audio for $7.49 on Amazon or your favorite audiobook retailer.

The former Navy Seal is a chauffeur by day, artist by night, so when hotter-than-ever ex-fiancée Suzanne Dayton interrupts his nude model sculpting class to serve him with inheritance paperwork from a man he’s never heard of, he assumes it’s a joke.

Turns out the joke’s on him. There’s just one catch. A big one.

And it might be Suzanne — in more ways than he ever dreamed.

Shopping for an Heir is the 10th book in the New York Times bestselling Shopping for a Billionaire series by Julia Kent. 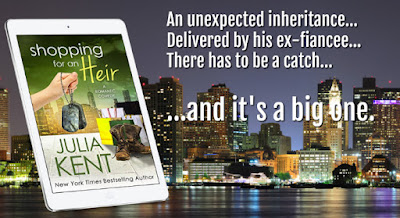 Author Bio:
New York Times and USA Today Bestselling Author Julia Kent writes romantic comedy with an edge. From billionaires to BBWs to new adult rock stars, Julia finds a sensual, goofy joy in every contemporary romance she writes. Unlike Shannon from Shopping for a Billionaire, she did not meet her husband after dropping her phone in a men's room toilet (and he isn't a billionaire). She lives in New England with her husband and three sons in a household where the toilet seat is never, ever, down 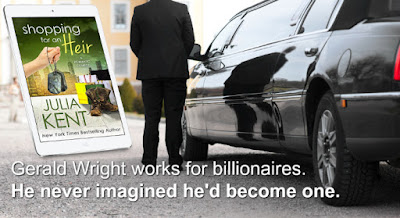 Teaser:
Squaring her shoulders, Suzanne decided to make this easy for him. God only knew why. “My law firm is handling the estate of deceased billionaire Harold Hopewell. You’ve been named in his will.” She tapped the thick envelope in his hand. “These papers explain everything.”
“Explain what?”
“You’re his heir. One of them, at least.”
At that moment, a leaky pipe released a drop that went ker-plunk into a ragged bucket on the floor.
“How can I be an heir to a guy I don’t even know?” His words were about the dead billionaire, but she knew he was just trying to engage her. Make her stay.
She looked around. She had to get out of there. “Read the papers. If you have any questions, my office number is on the letterhead.”

Excerpt:
Gerald awoke with a start, gasping into the strange box of reality, the room dark with shadows and filled with the scent of deeply anticipated horror.
“Oh, God,” he grunted, breathing erratic, heart in flames in the center of his chest.
That dream.
That f*king dream.
He hadn’t had that dream about Suzanne in eight years.
Drawing on every tool in his psychological coping toolbox, Gerald started with deep breaths. Inhale for eight, exhale for four. Something like that. His hands fisted the sheets, which were damp in sections. Sweating profusely, Gerald stood, throwing the sheet off him, stomping through his bedroom naked, headed to the kitchen for a glass of water.
Instead, he found himself five minutes later, standing in front of the open freezer door.
Just...standing there.
A glance at the stovetop clock told him it was 4:56 a.m. Sunrise soon. The day would begin.
Hell, the day had clearly begun already. No way was he going back to bed.
His nose was cold. His back was covered with sweat. One drop trickled down his spine and into his ass crack. And yet, still he stood there, stupidly staring at a half-empty freezer.
Enlightenment would not come from a frozen pad Thai dinner.
Today was his day off. He had a wide-open schedule. Nothing planned.
Which made today dangerous.
Think, man. Think, he urged himself, recalling what his psychologist at the Veterans Affairs center had told him, all those years ago. Use the tools. Don’t define yourself by the intrusive thoughts.
He froze.
And realized that the dream had been different this time.
Blinking, he felt his corneas stick against the backs of his eyelids, the rapid eye movement necessary to return his body to the well-oiled machine it needed to be.
The dream was different.