Book Blitz & Giveaway for Song of Sacrifice by Janell Rhiannon


The heart of the Trojan War belongs to the women.
Mothers and daughters; wives and war prizes, whisper to us across time…
…remember our songs alongside the mighty men of myth.
As the Age of Heroes wanes, the gods gamble more fiercely with mortals’ lives than they ever have before. Women must rely on their inner strength and cunning to survive the wars men wage for gold and glory.
Clytemnestra of Mycenae struggles for control of her life after Agamemnon ruthlessly rips it apart. Leda of Sparta survives a brutal assault by Zeus, shouldering a terrible secret in silence. Penelope raises Ithaka’s sole heir alone, praying for Odysseus’ swift return. Thetis, the sea nymph, despairs of her son’s destiny and resorts to forbidden magic to save him. Hecuba of Troy mourns the loss of her second son to a dark prophesy. And Shavash of Pedasus prepares her daughter to marry the greatest warrior who ever lived.
In a world where love leads to war and duty leads to destruction, the iron hearts of heroines will conquer all.
Sing, Muse, sing their song of sacrifice…
Replaces Song of Princes as the first book in the Homeric Chronicles.

Goodreads / Amazon / Barnes & Noble / iBooks / Kobo
—
EXCERPT:
LYRNESSUS
THRITY FOUR, Briseis and Mynes
1262 BCE
“YOUR KINGDOM SOMEDAY, little one.” Briseis rested her hands beneath her round belly, as the child stretched against her ribs. Leaning to the side, she attempted to avoid the uncomfortable tightness building at her lower back. The ache eased and she breathed easy again. Standing from the reclining couch, Briseis walked to the balcony overlooking Lyrnessus’ fields. If she squint her eyes, she could just make out the pale blue of the horizon across the Bay of Edremit. Much farther to the north, she knew Troy stood as the shining citadel of the East. “In another time, that would’ve been yours. I’d thought it mine, before―” Another pain doubled her and she gripped the banister. “By the balls of Zeus! What’s happening?”
Your daughter seeks the light …
Briseis looked around the chamber. “Who’s there?”
Have no fear, daughter, I am with you.
Another pain, this time much sharper and stronger, ripped across her belly and a gush of bloody water splashed at her feet. “Bree! Come quickly! Bree!”
The princess’ chamber door flew open, as the maid servant took in the scene before her. “My lady! By the gods, it’s your time!”
Briseis’ eyes widened in fear. “So soon? I’m not ready. I have―” Her knees buckled.
“My lady!” Bree swept to Briseis’ side, lifting the princess to her feet, half carrying her to the chamber bed.
“The pain. By the … balls of … Zeus. I.can.scarce.breathe.”
There is glory in your pain, Briseis.
“Bree, who else is here?”
“No one, yet,” she said, tucking a sheet about the princess. Bree ran to the door, yelling down the cavernous hall for the midwife. Within moments a gaggle of women flew through the door clucking about the impending royal birth.
Briseis’ scream startled them all. The midwife was at the princess’ side in the blink of an eye, pulling back the privacy sheet. Her hands firmly palpated Briseis’ belly. Without a word, she pushed Briseis’ thighs apart. Her eyes widened.
“What’s wrong?” Briseis asked, tears spilling down her hot cheeks.
The midwife pressed her lips together in a grim line. “My lady, this will be a difficult birth. I must put my hand inside of you to confirm my suspicions.”
“Do it!” Briseis screamed as another pain wracked her body. She groaned in agony as the midwife’s hand pressed into her. “By the gods …”
Bree pressed a cool cloth to her lady’s forehead and cheek.
“The child is breech,” the midwife pronounced, wiping her hands on a towel. A hush settled around the chamber. They all knew it was likely a death sentence to mother, child, or both.
Briseis wept. “No. No. By the gods, no!” Another pain tore through her.
Bree dipped the cooling cloth in the water basin again. “Can nothing be done? Can you save Princess Briseis?”
Briseis rolled back against the cushions. “Save my child, please.”
If that is your wish …
Yes, save my child. “Save my child. Take me instead.”
Bree’s face whitened. “What’s she saying?”
The midwife answered, “What all women say, when faced with such a choice.”
A dusty swirl of air blew into the chamber, snuffing out the oil lamps. The women froze, as a tall, glittering woman emerged from the small storm. Her gown flashed silver and gold. They fell to their knees, heads bowed, the goddess’ name on their lips … Eleithyia.
The goddess glided to Briseis’ side, stars blinking along the hem of her gown as she moved. She reached out a pale, cool hand to Briseis’ forehead. “Calm yourself, daughter. I’m here.”
Briseis smiled weakly. “Gratitude, Goddess.”
Eleithyia signaled to Bree. “You appear a strong maid. Help me set her onto her knees and place her hands on your shoulders.” She looked to the midwife. “Watch. Learn.”
The midwife nodded, as Briseis was placed into position.
The goddess moved her hands on either side of Briseis’ hard belly, running her palms flat against the lower abdomen. “Now, push your daughter to the light. Push like a warrior afield. Push for your life and for hers.”
Briseis cried out in agony, her limbs shaking with effort. Blood spilled as the child’s buttocks crowned.
“Hold your lady tightly.” Eleithyia’s voice was steady, as her hands worked calmly. Gently, she pulled each leg to length. “Push, Briseis.” The goddess, holding the babe with both hands, slightly turned the torso, releasing a shoulder blade and freeing the arm. Then, repeated the same for the other arm. The women gasped as the child hung half-suspended, face down, from Briseis’ body. Eleithyia positioned one hand on the baby’s chest, while the fingers of her other hand cradled the neck and head. “One last push, Briseis. Victory is yours with this battle.”
Briseis’ fingers dug into Bree’s shoulders. She screamed with her final effort, as the goddess guided the slippery child to the light. The princess collapsed against her maid, weeping with her exertions and aching body. Gently, Bree lay Briseis down.
Eleithyia handed the limp newborn to the midwife. “Rub the baby with clean linen, until she cries.” Turning to Briseis, she said, “You’ve won this battle, but you’ll lose the war.”
“What do you mean? What war?”
The goddess stood to her full height, sparkling in the dimly lit room. “The one inside of your heart, daughter.” With the ominous words still hanging in the air, Eleithyia’s image shimmered to nothing.
The midwife stared at the spot the goddess had stood. “By all that is sacred, I never thought in all my days to witness this. Blessed be our princess and her child.”
“Bring me my daughter,” Briseis said, proudly. Once the weight of her baby was settled in her arms, she smiled and joyful tears filled her eyes. “Phila, for love conquers all.” 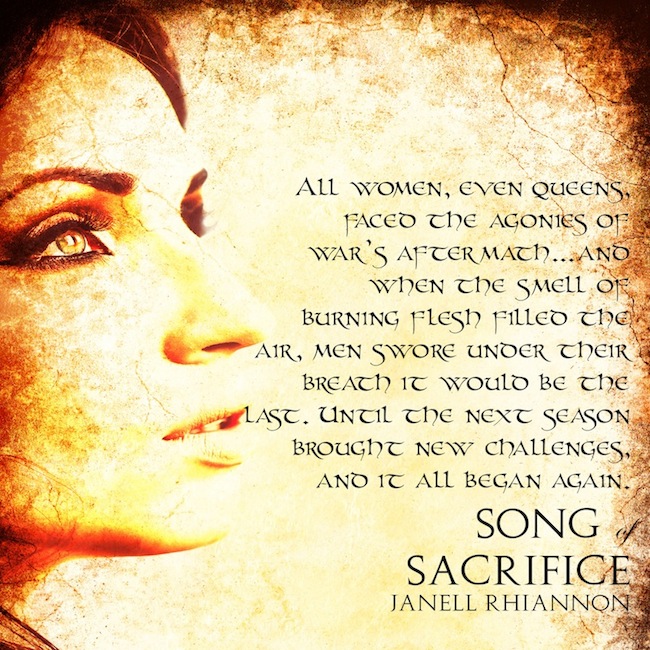 
In graduate school, Janell focused on the ancient history of Greece and Rome. Hooked by the “sword and sandal” world, she studied everything she could about mythology and Alexander the Great.
The Homeric Chronicles series is dedicated to merging dozens of Greek myths, including Homer’s epics, with plays, history, and archaeology. Her intent is to raise the heroines’ voices equally alongside the heroes, opening up a traditionally male focused genre to a female audience.
She lives in CA and enjoys spending time with her children and grandchildren. She has a pack of two big dogs and two cats.