Sleuthing Can Be Hazardous To Your Driving
By Sophie (Phee) Kimball

Granted, it’s not as overt as texting or putting on make-up when driving, but thinking about my next clue or some puzzling piece of evidence that I uncovered can be just as distracting, if not worse. At least with make-up, you still realize you’re behind the wheel of a car, even if one hand is applying the mascara.
Last week I drove to the dog park in my mother’s retirement community four times. Only two were with her dog in the car. The other two just happened. I started out knowing that I had a different destination in my mom’s neighborhood, but my mind began to wander. Actually, serpentine would be a better word.
I’m Sophie Kimball, better known as Phee, and I work as the bookkeeper/accountant for Williams Investigations in Glendale, Arizona. I moved out west at the bequest of a friend of mine, retired detective Nate Williams, who started his own investigative business in the suburbs of Phoenix. In retrospect, I should have known better. Living a stone’s throw from my mother and her wacky retirement community, I seem to get roped into every suspicious death that crops up. And believe me, there’ve been quite a few.
Right now I’m trying to figure out who could have used a bow and arrow to murder a resident in her community. I find myself mulling over the evidence and coming up with all sorts of theories. Too bad I can’t do that and drive at the same time. Believe me, it’s more than embarrassing when you arrive someplace and have no idea how you got there.
The good news was I landed the best parking spot by the dog park. That, in and of itself, should have been my first clue. The second came when I turned to grab the dog’s leash and realized that I was holding the straps to my handbag and there was no dog in the car. I couldn’t get out of there fast enough.
And then, there’s that unsettling feeling that I missed something.
“My God! I could have driven over a cow and I wouldn’t know it!”
It’s one of the hazards that amateur sleuths like me face. Ideas pop in and out of our heads like kernels of popcorn hitting the side of a microwave bag. And why is it that my greatest epiphanies come when I’m nowhere near a pen or pencil, let alone a computer? Those thoughts could as easily slip away before I have a chance to write them down.  Someone warned me that this kind of thing could happen as we age, but gee, I’m only in my forties.
After weeks of struggling, I once figured out who the killer was as I headed to Tucson for the weekend. Unfortunately, I had turned onto the I-17 north to Flagstaff when Tucson was my destination and I needed to go south. Now I try to stick closer to home when I’m in the middle of an investigation.
Like it or not, I’ve come to accept the fact that the problem solving part of my mind works best when I’m behind the wheel of my car. SHH! Whatever you do, do NOT, and I repeat, do NOT tell this to anyone who works for the Arizona Department of Transportation. In the meantime, I’ll just take my chances behind the wheel and up my insurance. I’ll also warn my friends on Facebook when I’m working on an unsolved murder so they can keep a good distance away from me when I’m on the road. 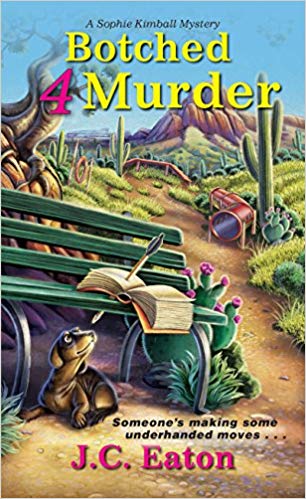 This writing duo sure know how to write a great cozy mystery! Sophie is loving her job and her new boyfriend when yet again her mother pulls her into some drama. At a big community meeting it is proposed to turn the golf course into a park of sorts. This makes lots of them mad which makes things get interesting when the main woman for it turns up murdered. Well despite her protests of wanting to investigate Sophie cannot help herself until she finds herself in danger. Well written mystery in an adorable town full of characters readers of all ages can enjoy. Perfect for fans of the genre. I really liked it so I give it 4/5 stars.

New York native Ann I. Goldfarb spent most of her life in education, first as a classroom teacher and later as a middle school principal and professional staff developer. Writing as J. C. Eaton, along with her husband, James Clapp, she has authored the Sophie Kimball Mysteries (Kensington) set for release in June 2017. In addition, Ann has nine published YA time travel mysteries under her own name. Visit the websites at www.jceatonauthor.com and www.timetravelmysteries.com
James E. Clapp
When James E. Clapp retired as the tasting room manager for a large upstate New York winery, he never imagined he’d be co-authoring cozy mysteries with his wife, Ann I. Goldfarb. His first novel, Booked 4 Murder

(Kensington) is set for release in June 2017. Non-fiction in the form of informational brochures and workshop materials treating the winery industry were his forte along with an extensive background and experience in construction that started with his service in the U.S. Navy and included vocational school classroom teaching.