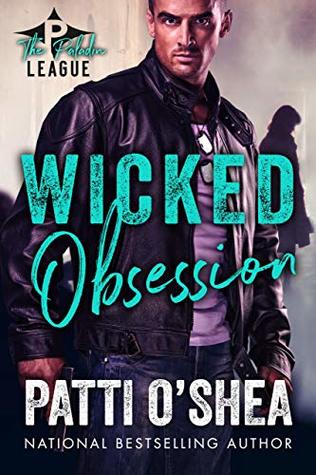 
Blue-blooded woman
As an ambassador’s daughter, Langley Canfield has lived all over the world, but she’s never fit in—not abroad and not at home. She thought she found a man who loved her for who she is, but when it becomes obvious that she’s the only one with deep feelings, Langley breaks up with him and heads across the country for a friend’s wedding.
Blue-collar guy
Special Forces Sergeant Ryder Pienkowski knew that he’d never be able to hold on to Langley Canfield, that she was completely out of his league, but it still stuns him when she ends things between them. He’s trying to get her out of his head when her father arrives and tells Ryder there’s a death threat directed at her. Without hesitation, Ryder hops on a plane and flies out to protect Langley. She might not want him anymore, but he’s not letting anyone hurt her.

Goodreads / Amazon
—
Behind the Scenes of Wicked Obsession
Some books don’t have much of a behind-the-scenes story, but that isn’t the case with Wicked Obsession. Here are some things that went on with this book.
Ryder and Langley weren’t supposed to be first in The Paladin League series. One of Ryder’s friends and that guy’s heroine were slated for that spot, but when my long-time writing buddy, Trish McCallan, asked if I was interested in doing connected stories, Ryder arrived.
Originally, Trish and I planned to write novellas, but both our stories expanded until they were novels. Oops! We decided to go with full books and forged onward.
As I wrote, Straight Up by Paula Abdul continually played in my head and it became the theme for this book. I’ll never be able to hear it again without thinking of Ryder and Langley.
In the first draft of Wicked Obsession, chapter 6 was the opening chapter. I needed to back up because too much happened before that point. Sometimes it’s hard to tell where to begin writing, and this was the first story I’ve tackled since I lost my mom to breast cancer. It was hard to get back in the swing of things.
My characters tell me their names—I don’t get to pick them. Ryder was straightforward and gave me his full name right away. Langley provided her first name immediately, but her last name changed multiple times over the first few chapters.
I always find pictures of my hero and heroine early in the writing process. By then I know them well enough to find a person who looks like them and that image also helps reveal things about my characters that I didn’t know at the start. With Ryder, I knew he was Polish from his surname, but I didn’t realize he was also half Italian until I found his picture.
In the series arc for The Paladin League, the hero from book 3 showed me a whole lot of attitude. I didn’t know what his problem was, and since I wasn’t working on his story yet, I didn’t try to find out. Wicked Obsession showed me why he acted the way he did.
No two books ever seem to write the same, and this one blazed its own trail. Sometimes it frustrated, but I enjoyed Ryder and Langley and I’m glad I was able to tell their story.

Author Bio:
Nationally bestselling author Patti O'Shea has won many awards for her writing and been nominated for even more. Her books have appeared on the Barnes & Noble, Waldenbooks, and Borders bestseller lists and have earned starred reviews in prestigious publications such as Publishers Weekly and Booklist.
At various points in her life, Patti O'Shea wanted to be a doctor, a pilot, an archeologist, an astronomer, a figure skater, a ballerina, an oceanographer, a marine biologist, and a photographer before she discovered writing at the age of fourteen. That's when she knew what she really wanted to be when she grew up.
By the time she entered the University of Minnesota, she realized she'd need a practical career. She chose the School of Journalism and took classes in nearly every discipline the college offered. After graduating with a degree in Advertising Copywriting (and far more credits than she needed), she promptly went to work for Northwest Airlines—in accounting. Since then she's moved throughout the company, working in departments like Technical Records, Tech Publications, and 757 Engineering. After the merger with Delta, her job was moved to Atlanta and Patti followed it. She works in TechOps in Maintenance Programs.
Born with a need to see everything, Patti has traveled to far off and exotic places like Papua New Guinea, Fanning Island, and the Yukon Territory in Canada. Along the way, she's had the opportunity to experience a lot of cool things. In Alaska, she saw a humpback whale breach near the catamaran on which she sailed; she's visited a salt mine in Austria and traveled to a lower level by sliding down a wooden rail; and she's seen a shark fin break the water in Australia right next to the small boat she was on. She's visited just about every one of King Ludwig's castles in Germany; watched the cliff divers of Acapulco; and was nearly mugged in a parking lot in Los Angeles.
With her wanderlust sated, Patti finally decided to get serious about writing. She quickly discovered that her travel and her eclectic education were all training to become an author. It's helped her to know a little bit about a lot of things since she's had characters that have been computer geeks, army officers, private investigators, demons, thieves, and other assorted careers. She's even managed to incorporate pieces of some of the places she's visited into her stories.