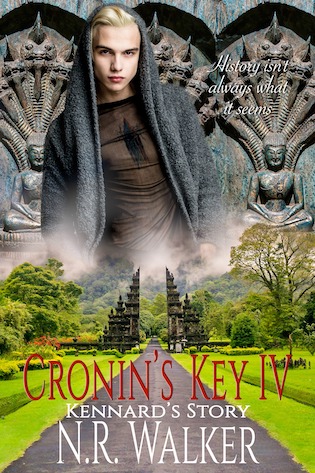 
Kennard and Stas have been enjoying being newly bonded mates, hidden away for the last six months in Stas’ cabin, deep in the forests of Northern Russia. When they get a visit from Alec, Cronin, Eiji, and Jodis, Kennard and Stas decide to return to London where they get news of a supernatural disturbance in India.
Excited for a new adventure, the band of friends embark on a journey like they’ve never seen before. Following a trail of snakes and serpents, they slip through gates into timeless dimensions all over the world, leaving them without their vampire powers. Even Alec is powerless as they follow a trail of gates and doorways to their final destination.
But the bad guy isn’t who they think it is, and Kennard will need to draw on his past to save their future. Because history is never what it seems…


N.R. Walker is an Australian author, who loves her genre of gay romance.
She loves writing and spends far too much time doing it, but wouldn’t have it any other way.
She is many things: a mother, a wife, a sister, a writer. She has pretty, pretty boys who live in her head, who don’t let her sleep at night unless she gives them life with words.
She likes it when they do dirty, dirty things… but likes it even more when they fall in love.
She used to think having people in her head talking to her was weird, until one day she happened across other writers who told her it was normal.
She’s been writing ever since…