Book Blitz & Giveaway for Bound by Obsession by Trish McCallan 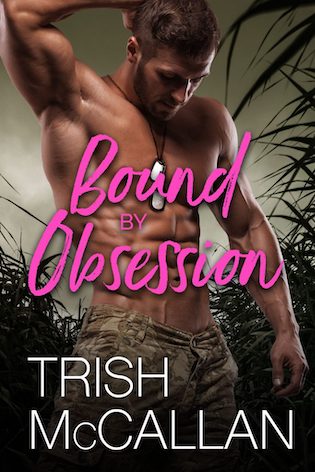 
When Navy SEAL Brett (Tag) Taggart’s ex-love is kidnapped during her wedding—to another man—Tag joins his SEAL brethren to rescue her. The mission reveals why Sarah walked out on him two years earlier, a revelation that serves to inflame the baggage between them. This time—after the danger settles and Sarah is free, will Tag be the one to walk away?

Goodreads / Amazon
—
EXCERPT:
“You shouldn’t be here.” Her voice was flat, a careful monotone.
He locked down a flinch. That even, cautious tone was another departure from the free living, expressive spirit she’d been back then.
“We need to talk,” he said, channeling that same flat monotone.
“There’s nothing to talk about.” She backed up a pace, as though she were about to slam the door in his face.
“Then you can listen.” He stuck his foot in the doorframe and locked down every ounce of emotion. “Look, I’m not here to get you back, okay? That ship sailed a long time ago. But you used to be a friend, and you’re about to make a big mistake. That’s something I can’t walk away from.”
“This isn’t your business.” The skin around her eyes tightened.
“I’m making it my business.” He forced the next words out, all too aware that the bearer of bad news was usually the one skewered and strung. “You don’t know what you’re getting into. Mitch isn’t the guy you think he is.”
“I know exactly the kind of man he is.” She contradicted him, her voice even tighter than before.
“Do you?” Tag asked grimly. “Then you know your loving fiancé is fishing at the BU and taking a new catch home every night?”
Something slipped through her eyes. But it wasn’t pain. It was more calculating than that.
“I don’t care.”
Tag rocked back on his heels. She didn’t care? That didn’t sound like the Sarah he’d known.
She must have seen the surprise on his face, because she leaned forward slightly, her voice dropping with intensity. “Look, nothing you say is going to change my mind. Nothing. Just go.”
He shook his head, disoriented. Could she really have changed that much over the course of two years? The Sarah he’d been in love with would never have put up with Mitch’s bullshit. Not if she’d known about it. The Sarah he’d loved had too much pride for that.
With a lift of his eyebrows, he cocked his head, studying her. Every freckle stood out like flecks of gold on her white face. He regrouped, frowning. There was something off here. Way off.


Trish McCallan was born in Eugene, Oregon, and grew up in Washington State, where she began crafting stories at an early age. Her first books were illustrated in crayon, bound with red yarn, and sold for a nickel at her lemonade stand. Trish grew up to earn a bachelor's degree in English literature with a concentration in creative writing from Western Washington University, taking jobs as a bookkeeper and human- resource specialist before finally quitting her day job to write full time.
Forged in Fire, the first book in her Red Hot SEALs series, came about after a marathon reading session, and a bottle of Nyquil that sparked a vivid dream. She lives today in eastern Washington. An avid animal lover, she currently shares her home with four golden retrievers, a black lab mix and two cats.