Hi, there! My name is Amy Flowers, and I own the Down South Café in Winter Garden, Virginia. I went to culinary school in Kentucky, and I can make just about anything you’d want; but my patrons generally know me for my breakfast and lunch dishes. I try to broaden their horizons periodically with something new and exciting. I’ll make a dish one day for them to sample, and if they like it, I’ll make it again for the next day’s special.

I first met Gayle when the Down South Café was still called Lou’s Joint. Lou’s Joint—seriously—can you think of a less appetizing name for a café? I told her my story, and Gayle called the adventure The Calamity Café. It certainly did start out as a calamity. After offering to buy the business from the previous owner, I went into her office and found her dead.

Well, I wouldn’t badmouth Gayle for anything in the world, but she’s a far cry from being a chef. She can make a few dishes really well, and otherwise, she’s adequate. But in a pinch—like a last-minute potluck or something—I wouldn’t be a bit surprised if she bought something already made and put it in her own dish. But don’t tell her I said so.

I guess it’s because I find myself in one predicament right after another. Who knew life in a small Southern town could be so eventful? It seems as if even when I’m minding my own business, I end up doing something crazy like making a giant cake dummy to put on top of my car and drive in the Christmas parade.

I don’t have to pick just one, do I? Oh, okay. Then I have to choose Ryan. He’s a local sheriff’s deputy, he’s gorgeous, and he’s my boyfriend. He really is wonderful.

Hmm, I guess that changes with each adventure. Right now, my least favorite person is Cheryl James. Oooh, she makes me so angry!

I’m planning on making some truffles for Easter and enjoying the holiday. Hopefully, there won’t be any catastrophes to ruin the fun.

About Truffles and Tragedy 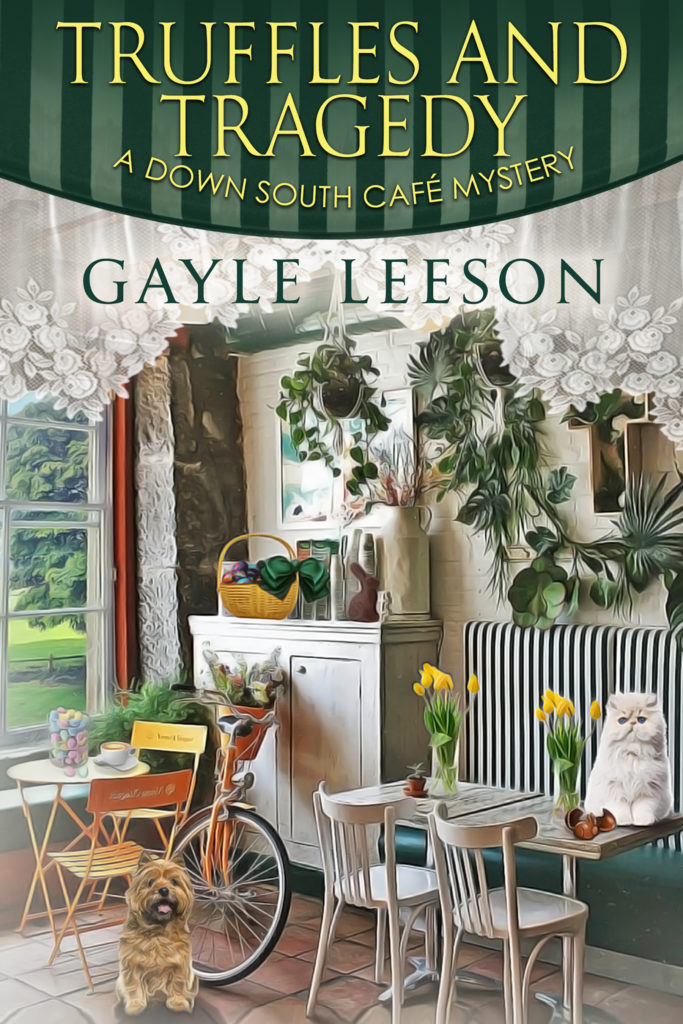 Truffles and Tragedy: A Down South Cafe Mystery

Down South Cafe owner Amy Flowers learns her chocolate truffles might not be the only things her patrons find "out of this world."

When her cousin, Jackie, asks her to give a presentation to her online class, Amy thinks all she has to worry about is speaking before a group. But then the nitpicky professor collapses. He has been murdered, and hot-tempered Jackie is the prime suspect. Some online forums are even speculating that the professor was an extra-terrestrial, so Amy must sort out fact from fiction to get to the truth.

Certain the real killer is setting Jackie up, will Amy be able to outwit the killer and save her cousin?

REVIEW
*I received a free copy of this book which I voluntarily chose to write an honest review for.
I have been in love with this series since book one and it just keeps getting better. This time Amy is geared up to give a business presentation during her cousins online class. It starts well but then the teacher collapses making them call 911. One would think being online would be the perfect alibi but Jackie is being set up to take the fall. Worried for her and Aunt Bess Amy teams up with her friends to clear her. Investigating while also running the cafe makes for a busy time but Amy handles it well. Add in the adorable raccoon and you get a cozy that is a delight to read. A total must read series for fans of cozies with a culinary theme. I totally loved it so I give it 5/5 stars.

Gayle Leeson is a pseudonym for Gayle Trent. Gayle has also written as Amanda Lee and Gayle Trent. Going forward, Gayle intends to keep her writing under the Gayle Leeson name. She lives with her beautiful family in the hills of Southwest Virginia.