I’m a calico cat, and I live at the Cobble Inn with Sheriff Ramsay and his wife Gilly who is a friend of Alicia, the director of the Cobble Cove Library. What readers might not know is that my name, KittyKai, and my breed, calico, were chosen because one of my author Debbie’s newsletter subscribers entered a contest using the photo of her cat who I am based upon.

I made my first appearance in Debbie’s 4th Cobble Cove mystery, Love on the Rocks. In this book, my lady Gilly brought me back from her honeymoon in Hawaii. Of course, I met my author earlier. When she learned from the winner of her contest that my name means “Ocean” and that the real KittyKai was named this after her owner took a trip to Hawaii, she got the idea for introducing me to the series by having Gilly find me on a beach in Hawaii during her honeymoon.

No. My only qualm about Debbie is she gets preoccupied working on other projects and doesn’t write our books as regularly as I’d like, but it’s nice that she fills in with short stories. We now have a short story series as well as a book series. The short story series are actually eBooks known as Kindle shorts. There are currently 4 of them, now that my Easter mystery is published.

I know exactly why. I was added to be a friend and partner in crime solving to Sneaky the Library Cat. I’m also the Inn cat, so I’m privy to what goes on there between Gilly, who has been known for helping Alicia in her sleuthing and the sheriff who, of course, shares his cases with her.

Well, Sneaky’s my pal. We’re pretty close. As for the human characters, it’s a tossup between Gilly and Alicia, although I think I’d say Gilly because she’s the one who brought me to Cobble Cove.

That’s a tough question because I get along with almost all the Cobble Cove residents. If I had to choose, it might be one of Gilly’s 3 sons. They’re all teenagers now and are very noisy. They play loud music, although the sheriff, when he’s around, puts a halt to that. Gilly spoils them, so they get away with stuff. But they treat me okay. I just wish they’d be quieter.

That’s up to Debbie. I was thrilled to be feature in her Easter mystery. Of course, it was also great to be on the cover of Love on the Rocks when I first joined the characters. I know Debbie is planning a 6th book and more Cobble Cove stories. I’m happy to be working with Sneaky now helping Alicia and Gilly solve crimes and keeping them safe, too. 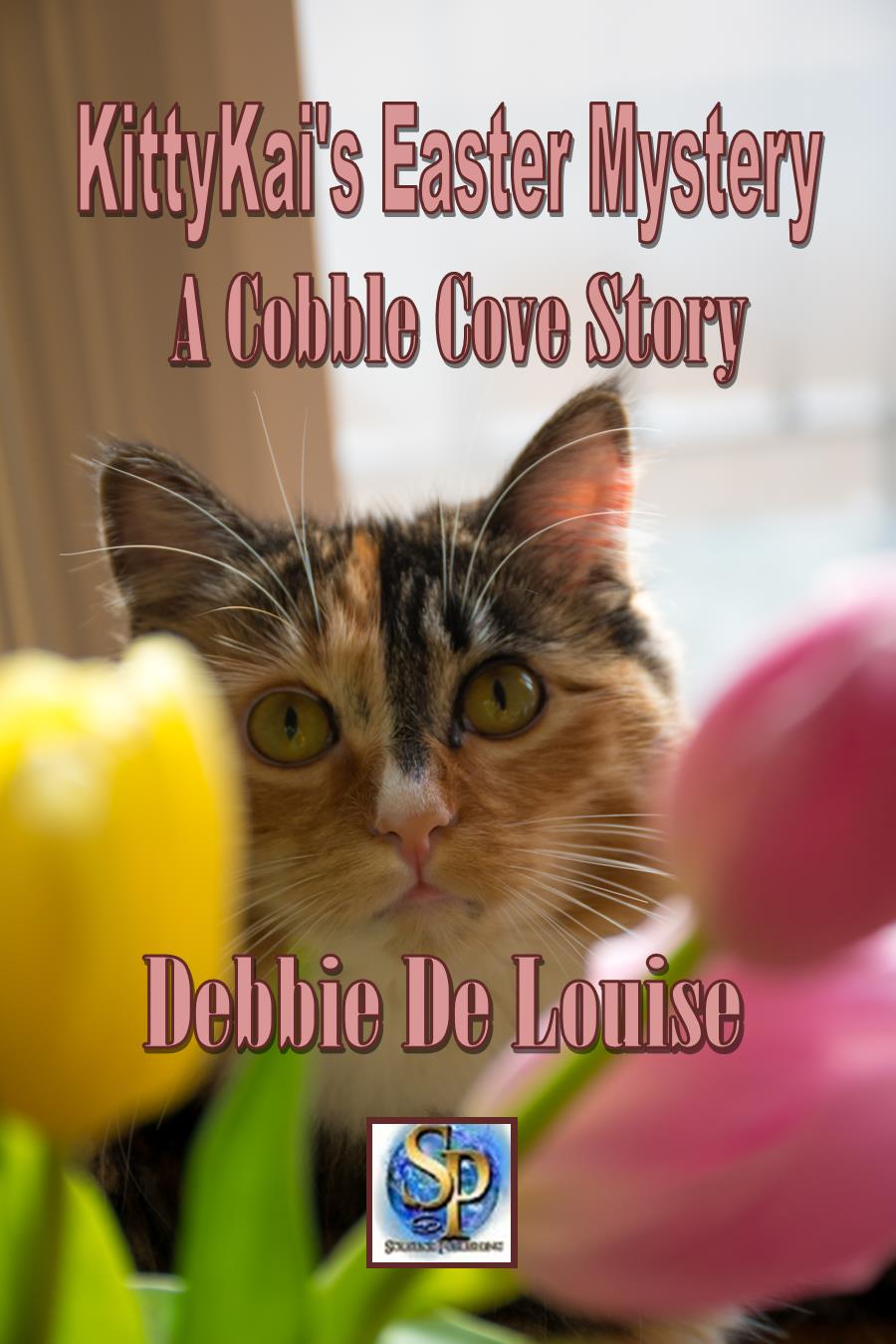 During an Easter egg hunt at the Cobble Inn, a ring is found on the grounds by Alicia’s daughter, Carol. When the sheriff has it examined, he discovers it belonged to him and Gilly’s neighbor, Gretchen Miller, who disappeared the month before. An investigation leads to the discovery of Mrs. Miller’s body buried on the site of the inn’s new construction.

As Alicia and Gilly set out to solve this new mystery despite their husbands’ discouragement, Sneaky and Kittykai, the library and inn cats, secretly lend them a paw.

REVIEW
*I received a free copy of this book which I voluntarily chose to write an honest review for.
This is the cutest kitty cozy! We start with am adorable Easter egg hunt that goes of course when one twin steals the other ones eggs. While talking with the one that stole them Alicia finds a ring inside one of the eggs that shouldn't be there. It gets more interesting when it is discovered that the owner is a woman who went missing a few months ago. This brings about a search of grounds where her body is found buried. As the investigation begins the adorable cat duo gets involved helping them find important clues. I especially love how the kitties keep talking to one another. This makes for a feel good cozy that you won't be able to put down. A perfect read for fans of cozies and kitties. I really liked it so I give it 4/5 stars.

Debbie De Louise is an award-winning author and a reference librarian at a public library on Long Island. She is a member of Sisters-in-Crime, International Thriller Writers, the Long Island Authors Group, and the Cat Writers’ Association. Her novels include the five books and four stories of the Cobble Cove cozy mystery series, a comedy novella, When Jack Trumps Ace, a paranormal romance, Cloudy Rainbow, and the standalone mysteries; Reason to Die, Sea Scope, and Memory Makers. Her latest book, Pet Posts: The Cat Chats is a non-fiction pet book. She lives on Long Island with her husband, daughter, and three cats.

Have you signed up to be a Tour Host? Click Here to Find Details and Sign Up Today!
Posted by Books a Plenty at 12:30 AM