Release Blitz & Review for War of the Sea by Dana Claire 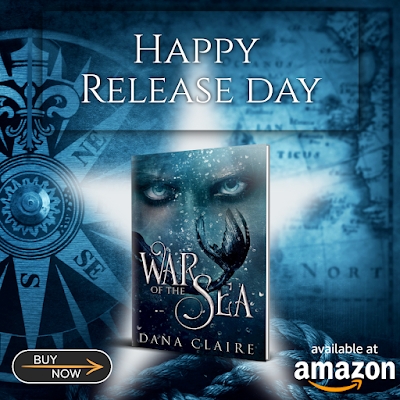 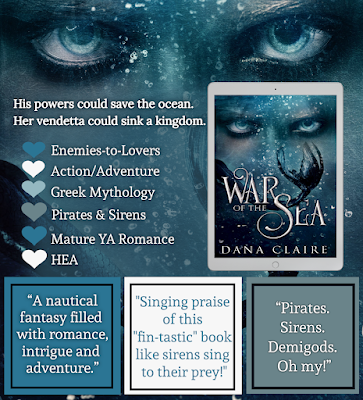 𝙒𝙝𝙖𝙩'𝙨 𝙒𝙖𝙧 𝙤𝙛 𝙩𝙝𝙚 𝙎𝙚𝙖 𝙖𝙗𝙤𝙪𝙩?
His powers could save the ocean. Her vendetta could sink a kingdom.
Captain Elouise Farrington, the youngest pirate on the Caviar Sea, seeks revenge on her father’s killer. But when her oddly hypnotic foe proposes a pact to kill the Siren Queen and end the War of the Sea’s bloodshed, she must make a choice. Put aside her long-brewing retribution or act the underhanded pirate and use the alliance to claim the life of the man who destroyed her family?
Captain Rylander Bordeaux, the revered royal navy captain of the Isle of Cava, has one mission—kill the Siren Queen and end the War of the Sea. The ocean is the only place Rylander calls home, but to bring peace to his beloved waves, he must defeat his past so he can reshape the future. His greatest hope is Captain Elouise, who calls to him like no siren song ever has. Too bad she’s almost as bloodthirsty as the fanged heart-eaters themselves. She promises to lend her all-female crew to his war on the sirens, but can he trust a brigand—especially one who wants him dead—to uphold her end of the bargain? Or will she be his undoing?
REVIEW
*I received a free copy of this book which I voluntarily chose to write an honest review for.
This is my first book by this author but I am definitely going to be looking into more of her work.  We follow Elouise and Rylander who start the book by totally hating one another for very good reasons. Life has plans for them though as they have to work together to solve a problem bigger them then. This sets things up quite nicely for fantastic read full of pirates, Greek mythology, fantasy, and plenty of action/adventure to keep you hooked until the very end. The writing creates a very vivid picture for the reader making them feel like they are there the whole time. Makes for a fantastic read. I really liked it so I give it 4/5 stars.