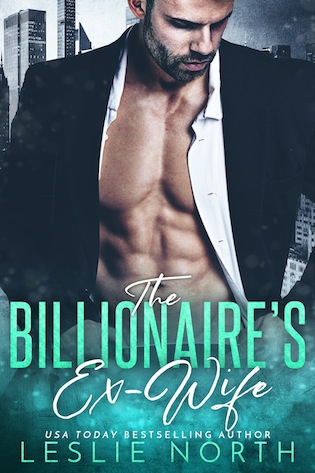 
Sam Jameson always gets what he wants and what he wants is his ex-wife.
Sam views the world in black and white—a strong attitude that’s earned him billions in the business world and an ex-wife in the real world. Sam wants is to choose his own future, but to do this he must pass a test set out by his older brother, and CEO: onboard his wayward brother, Eddie. Sam accepts the challenge but isn’t sure what to think when he learns that the woman he’d love and left is part of the test too.
Trinity Jameson is a fixer. It doesn’t matter if it’s ugly furniture or an ornery employee, Trinity has the touch and she’s spent most of her life helping others achieve their best potential. But when her ex-husband comes back to town to prove he’s got a heart, Trinity makes a decision: She’s not going to fix his problems for him—no matter what his smoldering blue eyes ask of her, she’s going to say “No.” She’s determined that he’ll fix his own mess this time.
Before Sam landed in New York, his goal was to leave the city just as fast. But when Trinity saunters into the room looking better than ever, his desire begins to shift. He realizes that what he really wants is what he can no longer have: Trinity. Sam has no trouble stoking their physical fire, but hot sex isn’t going to be enough to heal the hurt he’d caused long ago. Sam isn’t going to be dissuaded by her new found emotional wall. He helped her build it, and now he’s going to knock it down.

Goodreads / Amazon
—
EXCERPT:
His favorite suit was wrinkled. It didn’t matter if there was only one: the wrinkle was there, leering up at him like a lopsided, mocking smile.
Sam Jameson shook out his sleeve, but the minor imperfection remained. Minor, he thought to himself in consolation. A wrinkle that wouldn’t smooth was the least of his problems today; still, it lingered in the back of his mind as much as it lingered on the otherwise crisp fabric of his suit.
Sam distracted himself by gazing about the familiar waiting room of the New York office. He missed the East Coast more than he could express, and he wasn’t an expressive man by nature—but even he could appreciate the familiar, sanitized smell of the office, the classic wooden furnishings, and the precision of the New York City skyline just outside the high window. The L.A. office always smelled like someone was secretly giving manicures in the staff kitchen, and the West Coast skyline was…quirky. Slipshod. Obscured by a permanent haze and decidedly not up to code.
L.A. was to blame for Sam’s current predicament, of that he had no doubt. Who the hell lodged a complaint about “annoying perfectionism” and took their business elsewhere? Apparently L.A. clients did. Sam blamed the strange holistic culture that had seized the West Coast—the culture of “mistakes are successes that haven’t happened yet”, or whatever inane philosophy Californians liked to paste on the bumpers of their hybridized cars—but his older brother William didn’t see things the way he did. That was partly why Willian was CEO, and Sam was COO, of Jameson Advertising Agency: it wasn’t just a matter of age, but perspective…or so their father had once explained it.
If only Sam could give William a momentary demotion and make him see things from his point of view. This move to onboard Eddie was a mistake. More than that, it was far below Sam’s paygrade—but even he wasn’t so callous as to say as much out loud. He had learned early that when it came to family, talking in strictly business terms wasn’t exactly smiled upon.
But surely even William could see, from his lofty vantage as CEO, that bringing Eddie any closer in the family business was a mistake. Their father had certainly thought so. The youngest Jameson simply wasn’t cut out for more than wining and dining clients.
Inviting the family screw-up back into the fold didn’t seem like a wise move to Sam—but who was he to protest it? He would get in, do the job to a more than acceptable degree, and get out, the same as he always did. William wouldn’t be able to argue with the results, and then Sam could get the hell back to L.A. and move onto better things.
The door opened and Sam rose, applying one last swipe to the wrinkle. He raised his gaze, expecting to find Eddie’s lopsided grin and ridiculous eyebrows waggling a greeting.
Instead, it was his own ex-wife he found staring back at him.
“Trinity.” He hated how out of practice he suddenly sounded saying her name out loud. Not a day had passed since their separation that it didn’t enter his head on a repeating loop, always in threes: Trinity. Trinity. Trinity. “What are you doing here?”
His ex-wife blinked her gorgeous doe eyes like he had her caught in a crosshairs. Obviously his presence in the room wasn’t a surprise to her, but maybe seeing an estranged spouse in the flesh shook her as much as it shook him. 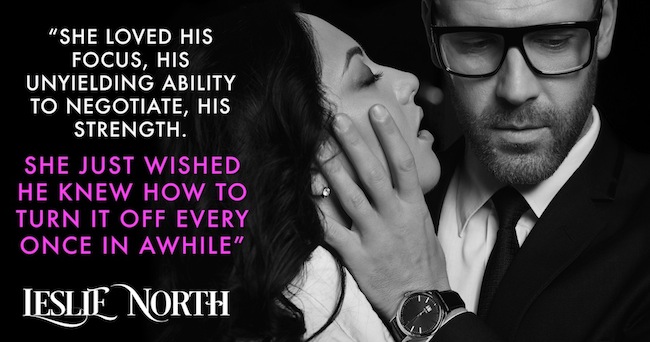 
The truth of the matter is she loves her fictional persona, Leslie North, more than her normal, day-to-day persona! Her bestselling books focus on strong characters and particularly women who aren't afraid to challenge an alpha male. Inspired after years of travel, her stories are set all over the world, from the tough streets of Russia to the beautiful beaches of the middle east.
Leslie fell in love with romance when she first picked up a scrappy, dog-eared romance book from her local library. She began writing soon after and the rest, as they say, was history. She now lives in a cozy cottage on the British coast and enjoys taking long walks with her two Dalmatians, George and Fergie.
She LOVES reader feedback, and if you have any comments, don't hesitate to contact her via e-mail: leslie@leslienorthbooks.com.