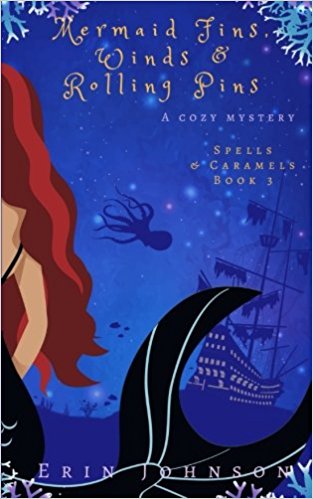 Murder at a Mermaid Nightclub
The enchanted village of Bijou Mer’s on high alert, with the villainous Horace on the loose. Imogen’s excited to escape the tension with a trip to the underwater Mermaid Kingdom to bake for the young mermaid queen’s engagement to the pirate king.
But when the mermaids turn out to be less French Riviera and more Jersey shore, the bakers are wrapped up in their world of clubbing in sea caves and fighting off seals for the best tanning spots, and are embroiled in a pirate smuggling scandal. It gets worse when a member of the mermaid court is found dead in a fishing net, and one of Imogen and Maple’s baked goods seems to be the murder weapon.
Imogen tries to fish out the real murderer to clear their names, while struggling with her romantic feelings for Hank. At the same time, she’s working with him to learn to control her magic and investigate Horace’s riddle and her own mysterious past.
As the mermaid court’s freewheeling lifestyle rubs off on the bakers, the gang lets loose and passions rise to the surface. But with a giant octopus crawling the ocean floor, the mermaid court filled with simmering secrets and scandals, and the ever present threat of the Badlands Army, Imogen must solve the murder before she ends up fish food herself.

A native of Tempe, Arizona, Erin spends her time crafting mysterious, magical, romance-filled stories that’ll hopefully make you laugh. In between, she’s traveling, napping with her dogs, eating with her friends and family, and teaching Pilates (to allow her to eat more).

All right it's official....I am completely in love with this series. It started with book one, continued with book two, and this one did not disappoint. For this installments Imogene and the baked get to travel to the Mermaid kingdom which just opens the door for the absolutely incredible world building that can be found in these. The world and characters are so great that the murder investigation is just an added bonus. The rich world of magic, mystery, and romance all blend into an amazing cozy mystery novel that I think everyone should read. I loved each and every page so it gets 5/5 stars. 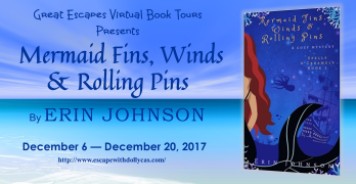