Book Blitz & Giveaway for One and Done by Melynda Price 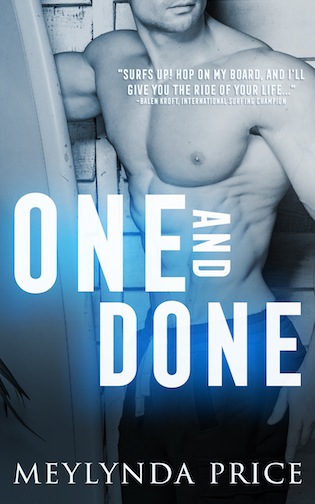 “If you kiss enough frogs, eventually you’re going to get a fungus…”
~Autumn Harris
When Autumn’s best friend Summer surprises her with a girls’ getaway in Cyprus for her 30th birthday, she makes up her mind that now is her time to shine. This is exactly the fresh start she needs to put the past and a messy divorce behind her. She might have bought into the ideology of Mr. Right once, but that myth was long busted—been there, done that—and she has the broken heart to prove it.
When a family emergency causes her bestie to bail on her minutes before their flight takes off, Autumn finds herself alone and bound for the “Island of Love.” Summer had an itinerary chock-full of girlfriend goodies planned—massages, salsa lessons, parasailing… Okay, maybe not parasailing, but this was going to be a week of fun, and now suddenly it’s a week for one. Armed with her Best Friends Guide Book for Having Fun—and no best friend—Autumn plans to check into her beachside villa with her new BFF, Captain Morgan.
Being ranked one of the top surfers in the world does have its perks, but discovering your sex-tape was released on social media?—definitely not one of them. On the heels of a scandal that has sponsors threatening to cancel his contracts, Balen Kroft has strict instructions from his publicist to lie low for the next week while this whole fiasco blows over. Seven days of incognito before hitting the surf again at the Titan’s of Maverick Invitational might not be such a bad thing—rest, relaxation, and fun in the sun… Until he comes face-to-face with his own personal riptide. If he’s not careful, Autumn Harris may just pull him under.
The fiery ginger has no idea who Balen really is and he’s determined to keep it that way. After the last eight months and a series of self-destructive behaviors, he’s content to let her believe he’s a homeless, beach-bumming surfer, living a carefree life one day at a time.
Autumn’s sexy vagabond is just charming enough to convince her to let him crash in the spare room of her villa. In exchange, he offers to be her new bestie for the week, taking her on all the excursions her friend had planned. It’s a tempting offer…her own personal tour guide and the possibility of some hot, no-strings, surfer-guy sex? What woman in her right mind would turn that down? She’s a big girl who knows the score. What can possibly go wrong?
***One and Done is a fun, sexy, island romance intended for readers 18+

Goodreads / Amazon
—
EXCERPT:
“Balen, are you homeless?”
His brow arched. Autumn wasn’t sure why he looked so surprised she asked. It wasn’t a very far leap. The writing was on the wall—his friend making that crack about him being a jobless beach bum, him volunteering to spend the week with her…and now here he was, needing a place to say. She wasn’t an idiot. One plus one usually equaled two.
Balen studied her until the tension in the room grew stifling. “Is my socioeconomic status an issue for you? You’ve got the spare room and I happen to be in need of one for the next week. I thought… Look, if staying with you is going to be a problem, I can leave.”
“I didn’t say I wanted you to go. It’s just…” The furrow of skin between his brows grew tighter and Autumn’s explanation died on her lips. But Balen wasn’t going to let it go. Great…she’d offended him.
“It’s just what, Autumn?”
Damn, this was getting awkward. “It’s just, now it makes sense. That’s all.”
“What makes sense?”
“Why you’d want to give up a week to spend it with someone you don’t even know. It makes more sense if you were down on your luck or something.”
The corner of his mouth twitched, not quite making it into a smile. “So, the lure of spending the week with a beautiful woman isn’t reason enough for you? Would it make you feel better if I told you I wanted to fuck you? Is that honest enough for you? Does it somehow make this scenario more believable?”
If he was trying to shock her with frankness, it worked. She was waiting for him to crack a smile and tell her he was joking, but he just stood there…staring at her. Holy shit, he was serious.
Maybe he was retaliating because she’d offended him? Autumn’s heart hammered inside her chest, heat bloomed in her cheeks, flushing down her neck and traveling lower. Refusing to let him rattle her with all his sexy, she notched her chin, met him dead in the eye and said, “I don’t think that’s it. You haven’t even tried to kiss me since we—”
He laughed, cutting her off. “So then I must be homeless? That’s your only other supposition here?”
His amber-flecked gaze dropped to her mouth, and Autumn instinctively moistened her lips. The air charged between them, becoming electric and lighting up her nerve endings. Undeniably, she had never been more attracted to a man than the one standing before her. She wasn’t sure why she’d made that snarky remark about him kissing her. It’d just sorta slipped out. Maybe she was subconsciously goading him.
When he spoke, his voice was lower—a husky rumble she felt all the way to her core. “Do you want me to kiss you, Autumn? Is it driving you crazy that I know what you taste like, what your mouth feels like against mine, and you can’t remember a single second of it?”
“Yes…” The confession was out of her mouth before she could call it back. She wasn’t sure if she was saying yes to the kiss, or yes that her alcohol-induced amnesia that was annoying the hell out of her—probably both.
Balen stepped closer and she caught a hint of his spicy scent mixed with the briny freshness of sea air. The heat deep inside her bloomed to a full-blown ache. He was so close his breath kissed her lips as she parted them in anticipation, waiting for him to close the scant distance separating them. Her breath stalled in her lungs, her lids fluttered closed. But his lips didn’t touch hers. Instead, they brushed the outer shell of her ear as he whispered, “Good…”
Her eyes flew open and she took a surprised step back.
“Learn from your mistakes, lest you repeat them.”
Really? This jerk is going to stand here and lecture me on propriety? Now Autumn was pissed. She didn’t need him judging her. She wasn’t judging Balen because he didn’t have a job or a place to live. Who the hell did he think he was?
“Fuck you, Dr. Phil.” She turned to walk away, but before she could put any distance between her and this morally arrogant, beach bumming surfer, Balen grabbed her arm and yanked her against him. His arm wrapped around her waist and a hand cradled the back of her head as his mouth came down on hers.
His lips were soft, yet frim as they crushed hers… Autumn’s startled gasp was all the invitation he needed to take the kiss deeper. Balen’s tongue delved inside, tangling with hers. Wow… Just wow…
The consuming way his mouth claimed hers, stole the air from her lungs. She felt his kiss all the way to her toes, lighting up every erogenous zone on the way down. Autumn melted against him, a soft, throaty moan of long-denied need escaping her on exhale.
How could she not remember this? It was amazing. Thankfully, Balen seemed more than willing to give her a reminder. His hand slipped into her hair, the tugging pull angled her head a little to the left. The kiss was hot, intense, and over as fast as it started.
Balen broke away and Autumn’s squeak of protest was drowned out by his own self-damning curse. Her heart was racing so fast she felt dizzy.
Reaching out, she grasped the island to steady herself, panting to catch her breath. Holy shit… She’d never been kissed like that in her entire life. The passion he sparked inside her was like an all-consuming fire. If just a kiss could do this to her, what would it be like to surrender herself to him? What had it been like?
“All right,” she said, still a little breathless. “You can stay…” 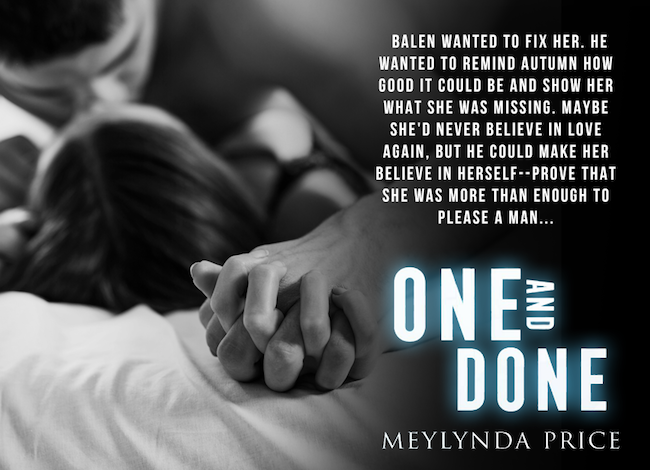 
Melynda Price is a bestselling and award-winning author of contemporary romance. Her Against the Cage series has finaled in many awards such as the RONE, USA Today BBA, Golden Quill, National Readers’ Choice, and New England Readers’ Choice.
What Price enjoys most about writing is the chance to make her readers fall in love, over and over again. She cites the greatest challenge of writing is making the unbelievable believable, while taking her characters to the limit with stories full of passion and unique twists and turns. Salting stories with undertones of history whenever possible, Price adds immeasurable depth to her well-crafted books. She currently lives in Northern Minnesota with her husband and two children where she has plenty of snow-filled days to curl up in front of the fireplace with her Chihuahua and a hot cup of coffee to write.