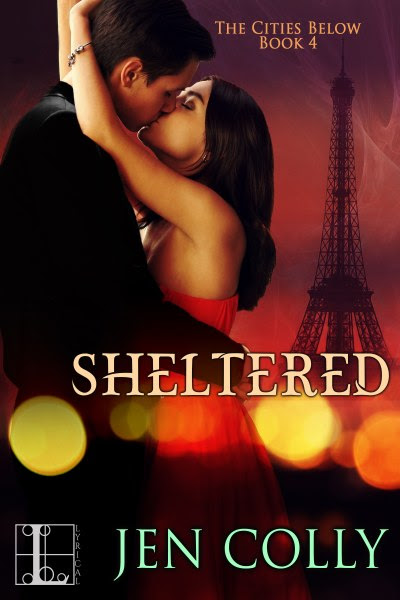 SHELTERED
The Cities Below Book 4
by Jen Colly

Only love can save her from certain death. Too bad, she doesn’t believe in love . . .
When Bette Dautry comes to him, seeking his protection, Guardian Rollin Casteel suspects the mysterious beauty has an ulterior motive. Unable to resist her seductive charms, he soon hungers to mark her as his. Only Bette disappears before he can sink his teeth into her tender flesh, leaving Rollin with one mission: to find her—and to claim her. . . .
Bette seduces Rollin intent on conceiving his child, believing the mother-child bond to be the only kind of love she can sustain—the only kind of love that can keep her alive. But she never expects to feel so much for her strong and silent lover. Then she discovers Rollin is none other than the heir to the Balinese throne—a man too noble—too dear—to play a role in her dark scheme. A man she would willingly die for, if only he would set her free. . . .
Add to Goodreads
Amazon * Apple * B&N * Google * Kobo 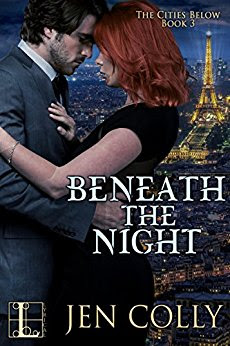 Beneath the Night
The Cities Below Book 3

Lord Navarre Casteel wakes from a long sleep to find the vampire city he rules forever changed and his future in the hands of a mysterious beauty who offers her life for his. Fiery-haired Cat survives his feeding, fueling Navarre’s body and mind—as well as his suspicion that she is one of the Forbidden—a lethal mix of vampire and human blood. Yet that doesn’t stop the throb of Navarre’s desire, the feeling that she is destined to be his mate, to hell with consequences. . . .

A solitary fighter sworn to protect the children in her charge, Cat never expects to feel so much for Navarre in the face of his savage feeding. Which is why his offer of protection is nearly her undoing. For how can she let down her guard when she has always walked alone? But Cat has never faced an enemy like the one she faces now, never felt such a powerful need to surrender to the force of love .
Add to Goodreads
Amazon * Apple * B&N * Google * Kobo 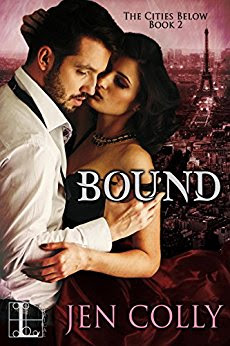 Bound
The Cities Below Book 2

The streets are a battleground for humans, vampires, and demons alike—where survival is a skill, love is a weapon, and the most dangerous act is to care for another . . .


Keir is an assassin devoted to Lady Arianne, the last of her royal bloodline. He is sworn to protect her, and that means eliminating any threat to her life. But while on a mission, he is set upon by a pack of demons, barely escaping with his life.
Cleopatra lives by a set of rules so rigid she no longer knows her true self. But her kind and loving nature resurfaces when she finds a man, bloodied and dying. Moved to help him, she risks her future and her life to save a stranger far below her aristocratic station.
Their attraction to each other is as powerful as it is forbidden. But even as their love grows, Keir keeps his true identity a secret—and this lie is not the only threat to their love . . . or their lives.
Add to Goodreads
Amazon * Apple * B&N * Google * Kobo 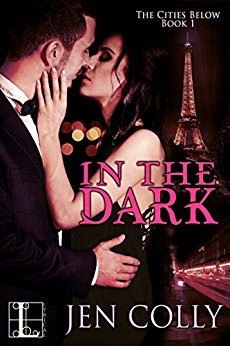 In the Dark
The Cities Below Book 1

Demons have returned, a vengeful enemy waiting to strike. Soren and Faith must find a way to survive the evil and darkness.

Faith's spur of the moment vacation, meant to free her and boost her spirits, has left her lost on the streets of Paris. And apparently, Paris is populated with something more than just humans. Vampires, suave, seductive and oh so sexy, and one such warrior vampire has set his sights on her.

When Soren hears Faith's terrified screams, he rushes in and saves her life without considering the consequences. Two problems: one, she's a human and clearly aware of his vampire qualities, and two, the men who attacked her were not men at all, but demons. Their target, his beloved underground city of Balinese. He can never let Faith go home again, but can she learn to love his people. . .love him?
Add to Goodreads
Amazon * Apple * B&N * Google * Kobo 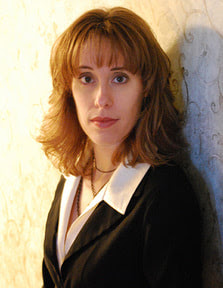 Jen Colly is the rare case of an author who rebelled against reading assignments throughout her school years. Now she prefers reading books in a series, which has led her to writing her first paranormal romance series: The Cities Below. She will write about anything that catches her fancy, though truth be told, her weaknesses are pirates and vampires. She lives in Ohio with her supportive husband, two kids, one big fluffy dog, and four rescued cats.
Website * Facebook * Twitter * Amazon * Goodreads