Book Blitz & Giveaway for Don't Rush Me by Jackie May


Most humans have no idea that a dark and deadly underworld, filled with magic and monsters, exists. They wander through life blissfully ignorant of the supernatural world around them. Nora Jacobs is different. Nora knows exactly what kinds of hellish creatures haunt the streets of Detroit.
Thanks to a unique set of psychic abilities, Nora has managed to steer clear of the underworld most of her life. But all that changes the night the most powerful vampire in the city discovers her gifts and decides to use her as a tool to find one of his missing clan members.
As if that’s not bad enough, Nora believes she’s cursed. All her life, people, especially men, have been drawn to her—some to the point of obsession and violence. Underworlders, it seems, are not immune to this curse, and now she’s caught the attention of some of the most dangerous monsters in the city.
Neck deep in an investigation only she can solve, Nora quickly makes as many new allies as she does enemies. Her biggest problem is staying alive long enough to decide which is which.
**This series is a slow burn reverse harem.

Goodreads / Amazon
—
EXCERPT:
“Stay out of this, Gorgeous,” Henry snaps suddenly. Parker helps him sit up and Terrance growls again, but it’s not quite as menacing as before. He must be calming down a little.
“Nora is my responsibility. I’ll take her to my own healer—” Henry’s cut o by another vicious snarl, and I’m scooped up into Terrance’s arms so fast I lose my breath. “Yeah…” Gorgeous says to Henry. “Doesn’t look to me like that’s happening.” If his smugness wasn’t directed at Henry, I might and his arrogance annoying. Instead, the guy is my hero. “She’s still mine. I’ve claimed her for a mate.” Gorgeous chews on this new bit of information. He holds up the blood-soaked stake to examine it in the
light and then points the tip at Henry. “Seems to me she’s not too interested in becoming your mate.” “Not at all,” I clarify cheerfully. “He’s holding me against my will.” Henry glares at me, then scowls so hard at Gorgeous his eyes start to turn red again. Whether he doesn’t like
what Gorgeous said or he simply doesn’t like the man himself, I can’t tell. But it’s clear Mr. Gorgeous loves to irk Henry.
“She’s human,” Henry says indignantly. “Claiming her is my right. I don’t care if she triggered Terrance’s protective instincts. He can’t just take what is mine.”
“Well, I’m sure as hell not going to argue with him while he’s in that state, so why don’t we all head down to the Agency, get the pretty human all healed up, and sort this mess out with the director?”
“What agency?” I ask. “Director of what? Who are you? And…is your name seriously Gorgeous?” Gorgeous grins at me like I’ve just made his entire day. “Can you think of a more appropriate name?” I snort again and then wince. e guy needs to stop making me laugh. “Conceited much?” “And proud of it.” He pulls a leather ID wallet from his pocket and tosses it to me. I’m still cradled like a baby in Terrance’s arms, but I manage to catch the ID. “Nick Gorgeous, at your service. I work for the Federal Underworld Agency. e F U Agency for short.” I roll my eyes at his stupid acronym—though it’s admittedly more entertaining than S.H.I.E.L.D.—and focus on the more important fact. is guy’s a cop. An underworld cop. Like an FBI agent or something. I didn’t even know that existed.
And, I’ll be damned, his name really is Nick Gorgeous. 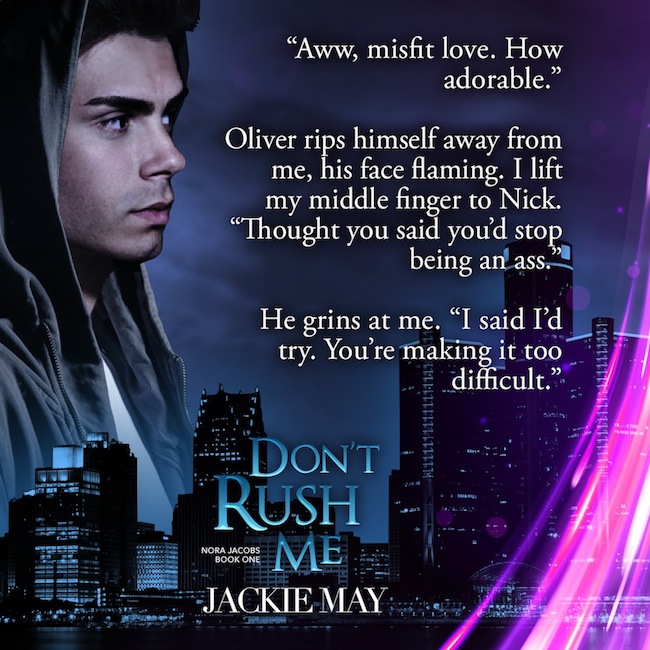 
Jackie May is a pseudonym for a husband and wife writing team. Josh and Kelly live in Phoenix, Arizona with their four children and their cat, Mr. Darcy. Jackie May is their only daughter. (And she keeps asking for her cut of the profits since we’re using her name.)