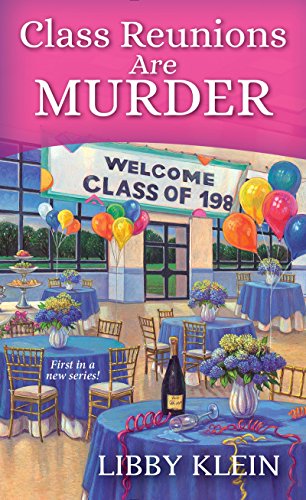 For fortysomething Poppy McAllister, taking a stroll down memory lane in Cape May, New Jersey, isn’t just awkward—it’s deadly.
Newly widowed and stuck in a middle-aged funk, Poppy has been running on cookies, infomercials, and one-sided chats with her cat for months. There’s no way on earth she’s attending her twenty-five-year class reunion—especially after receiving a very bizarre letter from Barbie, the popular cheerleader who taunted her all through high school. At least, not until Poppy’s best friend practically drags her to the event . . . Using the dreaded homecoming as an excuse to visit her eccentric Aunt Ginny, Poppy vows to leave Cape May with pride and Spanx intact. Too bad Barbie is still the queen of mean at the reunion. And worse, that her dead body is lying right in front of Poppy’s old locker. Singled out as the killer, it’s up to Poppy to confront her past and clear her name. But between protecting her aunt from disaster and tackling a gluten-free diet, can Poppy crack the case before she’s voted “Most Likely to Die” by the murderer? Includes Seven Recipes from Poppy’s Kitchen!

Libby Klein dabbles in the position of Vice President of a technology company which mostly involves bossing other people around, making spreadsheets, and taking out the trash. She writes culinary cozy mysteries from her Northern Virginia office while trying to keep her cat Figaro off her keyboard.

REVIEW
*I received a free copy of this book from Netgalley which I voluntarily chose to write an honest review for.

Amazing start to a brand new series. Meet Poppy as she goes through a life crisis following the death of her husband. Dealing with weight issues and depression her best friend pressures her into going to her high school reunion pretty much against her will. Dealing with lots of stuff before hand she makes it only to find the head bully dead and she is the prime suspect. What follows is one stumbling investigation as Poppy tries to clear her name while attempting to put her life back together. The addition of an eclectic aunt and one of the funniest cats ever creates one incredible cozy that I was unable to put down I was laughing so hard. It was absolutely wonderful and I consider it a must read for fans of the genre. I loved every minute so it gets 5/5 stars.