Blog Tour & Review for A Book Club to Die For by Dorothy St. James

A Book Club to Die For

About A Book Club to Die For 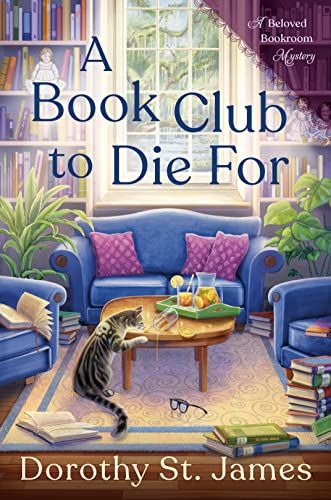 A Book Club to Die For (A Beloved Bookroom)

When a member of an exclusive book club is checked out, spunky librarian Trudell Becket must sort fact from fiction to solve the murder.

The Cypress Arete Society is one of the town’s oldest and most exclusive clubs. When assistant librarian Trudell Becket is invited to speak to the group about the library, its modernization, and her efforts to bring printed books to the reading public, her friend Flossie invites herself along. Flossie has been on the book club’s waiting list for five years, and she’s determined to find out why she’s never received an invitation to join.

But not long after Tru and Flossie arrive for the meeting, they’re shocked to find the club’s president, Rebecca White, dead in the kitchen. Rebecca was a former TV actress and local celebrity, but was not known for being patient or pleasant. She’d been particularly unkind to the book club’s host for the evening, who also happens to be the mother of Detective Jace Bailey, Tru’s boyfriend. And Rebecca had made it clear that she didn’t think Flossie was book club material.

With her boyfriend and one of her best friends wrapped up in a murder, Tru has to work fast to figure out who cut Rebecca’s story short before the killer takes another victim out of circulation....

REVIEW
*I received a free copy of this book which I voluntarily chose to write an honest review for.
This series just keeps getting better and better!  We catch up with Tru as she is getting ready to speak to the elite Arete Society book club about the library. Since several of the members enjoy the hidden part of the library Tru us uber excited to speak about how she is getting around the no book policy of the town's all electric library, but she forgot that her boss was a member of the group.This wouldn't be a problem if her boss knew the secrets but alas she does not making this extra precarious. This is a very snooty book club, which goes against everything I believe, which makes for lots of suspects when they find the president dead in the kitchen. While the woman was widely hated events quickly make Tru's boyfriends mother the main suspect so of course she has to investigate in an effort to find the actual guilty party. Makes for quite the fun read as she follows the clues with some help from her friends. Sure to delight cozy fans. I really liked it so I give it 4/5 stars.