1)     1.) Tell us a little bit about yourself--both something we learn from Deadly Travel and something that readers might not guess?  My name is Olivia Denis, and Deadly Travel, just like all the Deadly Series books, is about me. Please don’t think I’m overly proud. Kate Parker chose me to write about, and I’m honored. One thing you learn from Deadly Travel is how serious I am about being in the workplace. Ever since my husband was murdered, I’ve needed a job to pay the rent on my flat. Before then, I was aimless. I didn’t do anything to benefit anyone but myself. Now, I work at the newspaper, both on the society pages and on special secondary tasks the publisher gives me. This has led to special assignments for the British Counterintelligence Service. One thing you won’t learn from the book is that I would give up work in a heartbeat if Adam, my fiancé, worked at a job here in Britain and we had children that needed my care. It’s something I haven’t figured out for myself yet. But Adam is an Army officer, a war is brewing, and the day we can settle down and be a proper family seems far away.

2)    How did you first meet your writer? We first met when my husband Reggie was murdered after only three years of marriage. So begins Deadly Scandal and a major turning point in my life.

3)      Want to dish about her? What is there to say? Kate Parker is perfect. She’s a superb writer, a wonderful human being, and one of the nicest people on the planet. She also tells me what to say.

4)      Why do you think that your life has ended up being in a book? I live at an exciting time in Kate’s favorite city. I have two exciting jobs as Britain and Germany slide closer to war. I’m slim, fashionable, witty, energetic – in fact all of the things Kate is not. That’s why Kate is a writer and I get the adventures.

5)      Who's your favorite character? Why? That would have to be my fiancé, Adam. I’m hopelessly in love with him. He’s handsome, kind, well-mannered, brave…the list goes on and on.

6)      Who's your least favorite character? Why? My father. He’s old fashioned, stuffy, and he forgets I’m an adult. He tells me what to do and hates that I work for a newspaper. In his Victorian mind, that isn’t proper employment for a lady. For the three years we were married, Reggie served as a buffer between my father and me. Once he died, we were again back to fighting over everything.

7)      What's next for you? My wedding! At the beginning of Deadly Darkness, Adam and I have married that morning and now that it’s dark, we are traveling, somewhat unwillingly, around the countryside with our host, Colonel Sir John Summersby, checking to see that everyone has their blackout curtains fixed properly. It’s July 8, 1939, and Britain is holding their first full scale practice blackout. No car headlights, no lighted signs, no streetlamps. Of course, with all that darkness, mayhem is afoot. People are murdered. And a teenaged girl goes missing. 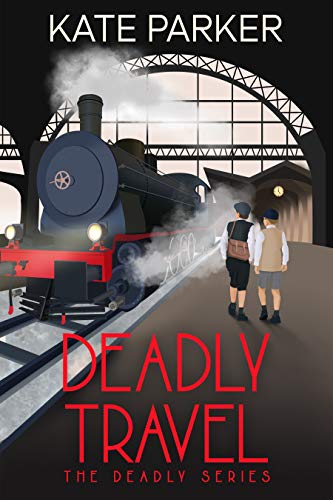 Travel to Berlin in 1939 is treacherous. Carrying out two clandestine missions in the enemy capital could prove deadly.

When a Quaker Kindertransport chaperone is murdered in the East End of London, Britain’s counterintelligence spymaster tasks Olivia Denis to join the group rescuing children from Nazi Germany. Olivia must find not only a killer, but a traitor relaying sensitive material to the enemy.

Once they reach Berlin, Olivia discovers she must rescue the family of an imprisoned British spy before she leaves the next day. An attack convinces Olivia the family’s two young sons are in grave danger, but where to hide them?

Can she protect the boys before they become the traitor’s next victims?

Deadly Travel, Book Five of the Deadly series, is for fans of World War II era spy thrillers and classical cozy mysteries, of intrepid lady sleuths with spunk and smarts. No explicit cursing, sex, or violence.

Continue your journey today into Olivia’s world of intrigue in London in the days leading up to war.

REVIEW
*I received a free copy of this book which I voluntarily chose to write an honest review for.
Get ready for a trip into the past. We follow Olivia during a time of uncertainty and turmoil as she joins a group rescuing kids from Nazi Germany after a previous chaperone is found murdered. She is tasked with finding out what happened while dealing with all the chaos at the same time. The mix of history and murder makes for a fascinating read that will draw you into the timeframe while keeping you guessing at the same time. Sure to delight fans of historical novels and cozy mysteries. I really liked it so I give it 4/5 stars.

Kate Parker caught the reading bug early, and the writing bug soon followed. She’s always lived in a house surrounded by books and dust bunnies. After spending a dozen years in North Carolina, she moved to Colorado. The Rocky Mountains are beautiful, but she’d developed a love of wide rivers, warmer and wetter weather, and fast-growing greenery that sent her hurrying back to North Carolina.

Deadly Travel is the fifth book in the Deadly Series, and Kate’s plan is to follow it quickly with Deadly Darkness, both set in 1939 in the days leading up to war. There are at least three more of the Deadly Series coming that will bring the beginning of the war to Olivia’s doorstep. Kate reports that she is having fun creating new stories to entertain readers and chaos to challenge her characters.