Maxence’s brother was trying to kidnap or kill him, and an organized crime thug wanted to cut off Max’s head and feed it to the sharks for entirely different reasons.
So, when a cute little blonde stood up on a barstool in the middle of the Buddha Bar in Paris and drew the attention of the wrong sort of guys, Maxence swooped in for the rescue. Everything about her appealed to him: her sweetness, her giggliness, and especially the fact that she was in trouble.
That last part made her sugar and catnip to Max.
Luckily, he only had five days before he left Paris and Europe for wherever his global charity job was going to send him this time.
Why not spend it with the funny blonde who insisted he lie to her?
Indeed, if she thought everything he said was a lie, he could confess his sins, unburden his soul, and reveal what he thought he never could.
Five days with her sounded like Heaven, if he could just convince her to stop throwing him out of her hotel room.
***
My life has become a sad country music song, but instead of heading south, I went to Paris.
I was a good girl who had nothing left to lose, literally. My boyfriend had stolen everything.
Everything except a non-refundable plane ticket to Paris, which was supposed to be the trip of a lifetime where that deadbeat was going to propose at the top of the Eiffel Tower.
So, I got on the plane without him.
After all that, it was understandable that when I started drinking at the Buddha Bar, things got a little out of hand.
Luckily, a man intervened. He was so ripped that I could see every thick muscle of his abs, obliques, chest, and arms through the tight tee shirt he was wearing. He towered over the guys who were bothering me, and they backed off.
I took him back to my hotel because I was full of drunken, bad decisions that night.
The last thing I needed was a man who wanted to save me when I was trying to do all the wrong things.

When the man had arrived a few minutes earlier, Dree had noticed him as soon as he’d touched the bar, a few people away from where she’d been sitting. She was pretty sure half the people in the Buddha Bar had watched him cross the room and order a drink before they broke his spell and went back to their own, now-troubled conversations, but they were still sneaking glances at him.

The tall man had smiled easily while he ordered a drink, his gaze serene while he surveyed the crowd. He was really tall, too. His head stuck up above everyone else’s like they were a black-and-blond ocean and he was swimming with his head held high out of the waves, lest he soak his dark, curling hair that swayed over his forehead and neck. He looked like he was a white guy with a tan, or he might be olive-skinned, like from somewhere near the Mediterranean Sea. Something about him made her feel like a fish drawn to an irresistible lure.

When he twisted, turning toward Dree, his white tee shirt pulled taut over his broad, muscular chest and shoulders. The pristine cotton clung to the rounds of his massive pectorals, the ripples of his abdominal muscles, and his obliques that cut diagonal slices from his ribs to the waistband of his trousers.

Oh, somebody worked out.

Dree had to respect the time in the gym, even though she did not go to the gym nearly as much as he obviously did.

Or ever, really. The hospital where she worked had a gym, and she had been meaning to start going there for three years.

The man’s dark dress pants contrasted oddly with his plain white tee, which looked like it might be an undershirt. If it had clung to his skin any more tightly, she would have thought he had just won a wet-tee-shirt contest. She could see every one of his eight-pack of abdominal muscles, even those top ones nestled under his pecs.

When Dree leaned back to observe the guy’s backside, his legs were long and thick with muscle.

Between his incongruous clothes, tousled black curls, and sleepy blinks, the guy looked like he’d left his suit jacket, shirt, and tie on someone’s bedroom floor and sauntered into the bar for a drink.

That man could throw his clothes on Déchirée Dree’s floor anytime.

She wanted to touch him. The tequila shots she’d sucked down made her body feel languorous and heavy, and she wanted a tall, strong, sexy man to touch her, drive her backward with the warmth of his male body, and move above her and inside her with slow, sinuous thrusts, his faint masculine musk surrounding her and driving her out of her mind.

The deliberate way that man lifted his drink to his mouth—when he touched the highball glass to his full, lower lip before he tilted it, the liquid flowed in, and he swallowed—made Dree think he would be incredible in bed, that he’d take his time, that he’d know what he was doing to her.

The inside of her mouth watered like she wanted to lick him.

And he was still staring back at her, his dark eyes serious and almost wary.

He took the glass away from his mouth like he was stripping off his shirt for her to see his naked flesh.

Dree was leaning so far toward him that she nearly fell off her chair.

A new guy inserted himself into her view, jamming himself into the narrow space between Dree and the petite, judgy woman sitting next to her.

The new guy’s red silk shirt was unbuttoned to his waist, exposing a thatch of black chest hair. “Bonsoir.” 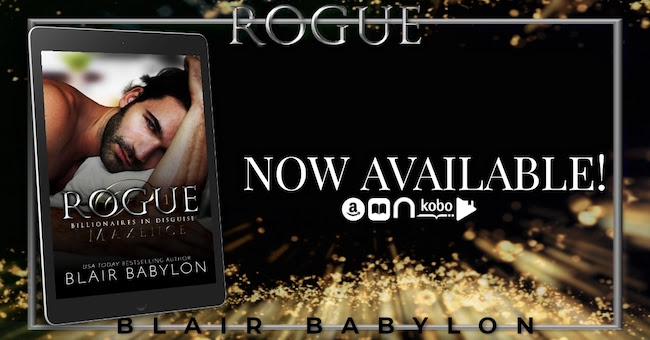 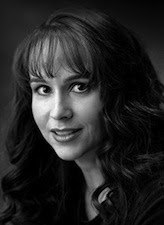 "I'm passionate about books and literature. Books delve into what it means to be human and connect us to each other. I write intense, deeply imagined romance novels for serious readers because the world needs more love." ~~Blair Babylon

Blair Babylon is an award-winning, USA Today bestselling author who used to publish literary fiction. Because professional reviews of her other fiction usually included the caveat that there was too much deviant sex and too much interesting plot, she decided to abandon all literary pretensions, let her freak flag fly, and write hot, sexy, suspenseful romance.