1.)Tell us a little bit about yourself--both something we learn from [the story] and something that readers might not guess?

My name is Marlee Jacob, I live in Oriole Point, Michigan, and I was born on Christmas Eve. In fact, I’ll be celebrating my thirty-first birthday in this latest book since it takes place at Christmastime. Although the village of Oriole Point is my hometown, my parents now live two hours south in Chicago. My mom is a professor of English literature and a fan of Charles Dickens, which is how I got my name. I own a berry themed store called The Berry Basket. Because this part of Michigan is known as the Fruit Belt, a berry store seemed a perfect addition to our eclectic downtown business district. In addition, all my Jacob ancestors owned orchards, so I’m carrying on a family tradition.

Sharon and her family moved to a scenic village on the shores of Lake Michigan over a decade ago. After falling in love with her new home, she wanted other people to know what a wonderful place it was. Although she was busy writing a historical mystery series, she had long dreamed of writing a cozy, too. Setting a cozy mystery in a quaint lakeshore town seemed the answer to that dream, as well as the perfect vehicle to show her love for the region. That led to the creation of the fictional town of Oriole Point, Michigan. And me.

I should probably mention that my author based aspects of my character on her own life. We’re both brunettes, NYU alumni, and former residents of New York City who are grateful to now live along the lakeshore. We’re also devoted bird lovers, which is how I ended up with a pet African grey parrot named Minnie. Btw, my author also had a parrot named Minnie in her life for many years. However, my Minnie has a much larger vocabulary. I think it would have been fun if she had shared other aspects of her life as well. For example, my author is a former archaeologist who excavated at a number of sites, including a Roman fort in Britain. She also worked in several museums and has some interesting behind the scenes tidbits. For example, security at one of the museums included Dobermans, trained to be silent, who are left to roam free in the building after hours. And don’t get her started on some of her paranormal experiences. She might scare you.

Probably because my author gave me a colorful backstory. Although I was born and raised in the small town of Oriole Point, I went off to NYC to attend college. After graduation, I remained in the city and became a producer of cooking shows at the Gourmet Living Network. But the husband and wife team of one of my shows had a rocky marriage. So rocky that one of them poisoned the other. This shocking act, followed by a notorious murder trial, convinced me to return home after the killer had been sent to prison. I think my lurid experience in New York City prepared me to handle the deadly events that transpired once I moved back to the lakeshore. Although I had hoped for a life that no longer involved murder. Maybe next year.

Only one?  A difficult choice since so many of my friends live in Oriole Point. If I had to pick my favorites, I’d start with Tess Nakamura, my best friend since fifth grade. We met when we made history by tying for first place in a regional spelling bee. A gifted glass artist, Tess is a more sensible and cautious person than I am. Although this doesn’t stop her from playing Honey Wheeler to my Trixie Belden when I get drawn into murder investigations. Another favorite is my boyfriend, Kit Holt, who has turned out to be much more supportive and honest than my previous boyfriend and fiancé, Ryan. In fact, Kit restored my belief in men and romantic love. However, I’m still hesitant about even considering marching down the aisle anytime soon.

My least favorite characters are a married couple, making them an unpleasant matched set. Jerry and Sheila Sawyer own a downtown candy store called Sweet Dreams. Their choice of business seems ironic. Neither of them possess a drop of sweetness in their personalities. Indeed, at our monthly Oriole Point Business Association meetings, all of us have to listen to a new litany of complaints from the couple. The Sawyers are not happy in our little town, and periodically threaten to sell the business and leave. This remains an empty threat. But one can only hope.

In my latest mystery, HOLLYBERRY HOMICIDE, I let myself to be talked into acting in a local production of ‘A Christmas Carol’. As someone named Marlee Jacob, I did see the humorous appeal of casting me as Jacob Marley after the original actor was found dead. But I didn’t expect all the similarities to Dickens’ ‘A Christmas Carol’ to continue. Ghosts included. 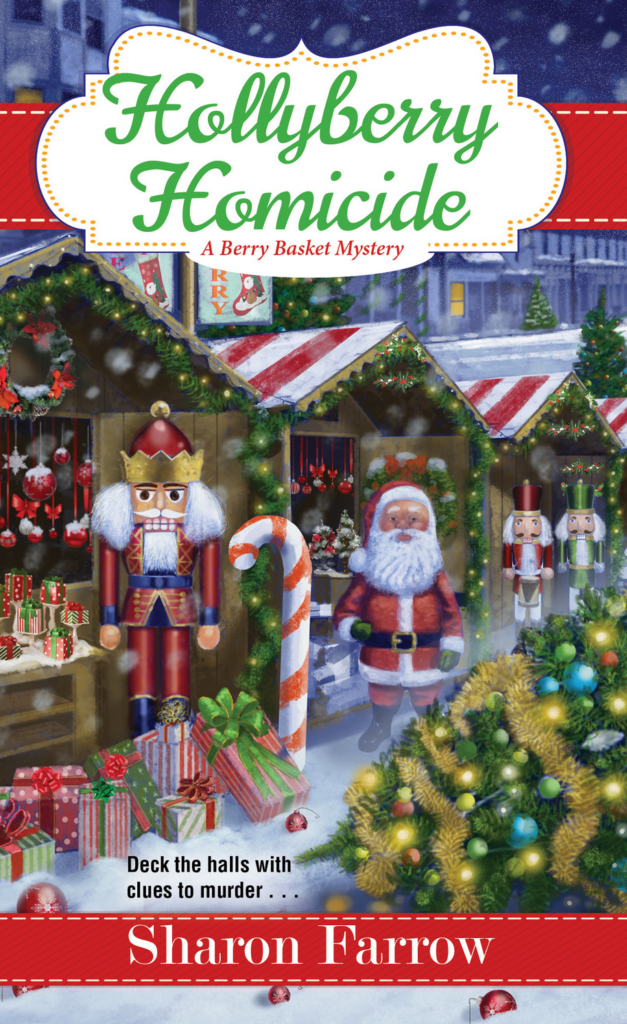 A cold wind is blowing off Lake Michigan, and murder is scaring the dickens out of everyone . . .

Considering her name, Marlee Jacob is an obvious choice for the role of Jacob Marley in Oriole Point’s production of A Christmas Carol. It’s just sad that the role has opened up because of the death of the elderly actor who’d originally been cast.

But Marlee, the proprietor of The Berry Basket, will do her best to keep spirits high—that is, until clues start mounting that there’s danger behind the scenes. There are accidents on set, the tree in the village square topples over, and worst of all, a body is found with a sprig of holly draped over it. If Marlee can’t wrap up the case, she may not have a berry merry Christmas . . .

*I received a free copy of this book which I voluntarily chose to write an honest review for.
Christmas anyone? This adorable cozy will definitely put you in the mood as the small Michigan town hears up for the holiday by holding a Holly berry festival. Unfortunately it starts with the death of a 95 year old resident at the museum you train exhibit. At that age it could have been natural causes but Marlee has her doubts so she starts asking questions despite how busy she is. Secret after secret starts coming out until a second death occurs that doesn't look quite as natural bringing things to a head. The details in this story are amazing really putting you in a holiday mood as you picture all the events going on. Marlee is easy to relate to and her pets just make it sweeter especially the quirky bird. The berry details are fantastic showing some thought out research that will blow your mind. It all combines into a cozy you won't want to stop reading u til you hit the last page. I totally loved it so I give it 5/5 stars.

Sharon Farrow is the latest pen name of award-winning author Sharon Pisacreta. A freelance writer since her twenties, she has been published in mystery, fantasy, and romance. Sharon currently writes The Berry Basket cozy mystery series for Kensington. The series debuted in 2016 and is set along the beautiful Lake Michigan shoreline where she now lives. She is also one half of the writing team D.E. Ireland, who co-author the Agatha nominated Eliza Doolittle and Henry Higgins mysteries.